The spectacle of these black holes is just beginning to reach Earth. 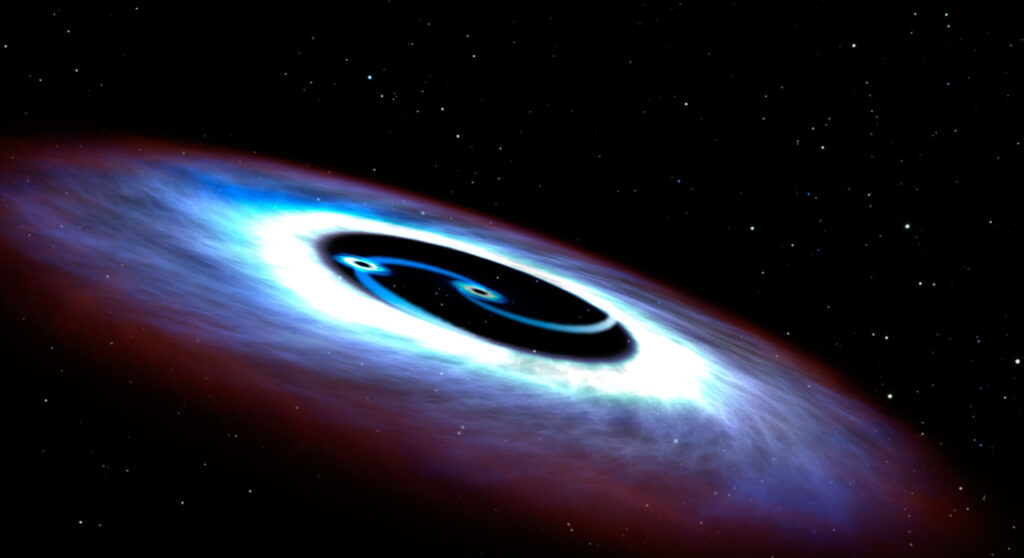 The authors of the recent study in The Astrophysical Journal Letters called ‘The Unanticipated Phenomenology of the Blazar PKS 2131–021: A Unique Supermassive Black Hole Binary Candidate’ have noticed something peculiar happening in space, which they anticipate will create an event that will send ‘gravitational waves — ripples in the fabric of space-time.’

They have been ‘monitoring the brightness of about 1,800 blazars scattered around the universe’

Blazars, in layman’s terms, are supermassive black holes hundreds of millions of times more massive than our sun.  They are among the brightest of black holes that we can observe because they have a jet of supercharged matter pointing directly at the observer, in our case the Earth.

The study’s authors noticed that the brightness of one of the blazars, PKS 2131-021, fluctuated at regular intervals, comparable to the ticking of a clock.

Analyzing 45 years of data from five observatories, the researchers have surmised that what they are observing two black holes where the second black hole tugs on the first each time they orbit each other approximately every two years.

Brandon Specktor senior writer for livescience.com speculates that they ‘are large enough and close enough that they could unleash gravitational waves in advance of their inevitable collision‘

The merge is not expected to happen for another 10,000 years. Given the enormity of these supermassive black holes and their proximity to each other they could unleash gravitational waves ahead of their inevitable collision, Further observations of PKS 2131-021 will try and catch the development of those waves ahead of the collision.

In about 10,000 years, two supermassive black holes called PKS 2131-021, observed 9 billion light-years from Earth, will collide.  NASA says that these black holes have been on this trajectory towards each other for about 100 million years, and now they are 99% of the way towards meeting each other.

PKS 2131-021 is a supermassive black hole. It is pointing a jet of supercharged matter directly at Earth. The supercharged matter is in the rings of hot gas that form around the black holes. When a black hole pulls in that gas with its powerful gravity, some matter may escape, and the jet of plasma will be propelled away at nearly the speed of light.

What does this mean for humanity?

It is not clear from the authors’ research what the collision of the black holes will mean for humanity. An event of this magnitude has never been observed before.

Generally, gravitational waves do not affect us; gravitational waves from the distance of the nearest star ‘would pass through us almost completely unnoticed. Although these ripples in spacetime carry more energy than any other cataclysmic event, the interactions are so weak that they barely affect us.’

Should we be worried?

It is hard to know whether the gravitational waves caused by this event will be too close to Earth.  This event’s magnitude and distance are beyond most people’s comprehension. It can take a powerful computer over 20,000 hours to model simulations of smaller black hole collision events.

Vijay Varma a graduate student at Caltech in 2019, describing black hole collision event similar to taking 30 suns and forcing them into a space the size of Hawaii colliding at the speed of light creating one of the most violent events in nature.

When the PKS 2131-021 black holes collide, they will be equivalent to not just a few dozen suns colliding, but rather hundreds of millions of our suns colliding and sending a jet of plasma and matter towards Earth at nearly the speed of light.

As the event is happening nine billion light-years away and will take too much computational power to model it accurately, it is not possible to calculate how much of the force will dissipate before reaching the Earth. An event of this magnitude is so significant it may even affect the very nature and fabric of space-time.