The Marines only use top-notch weapons and aircraft to win whenever they go. 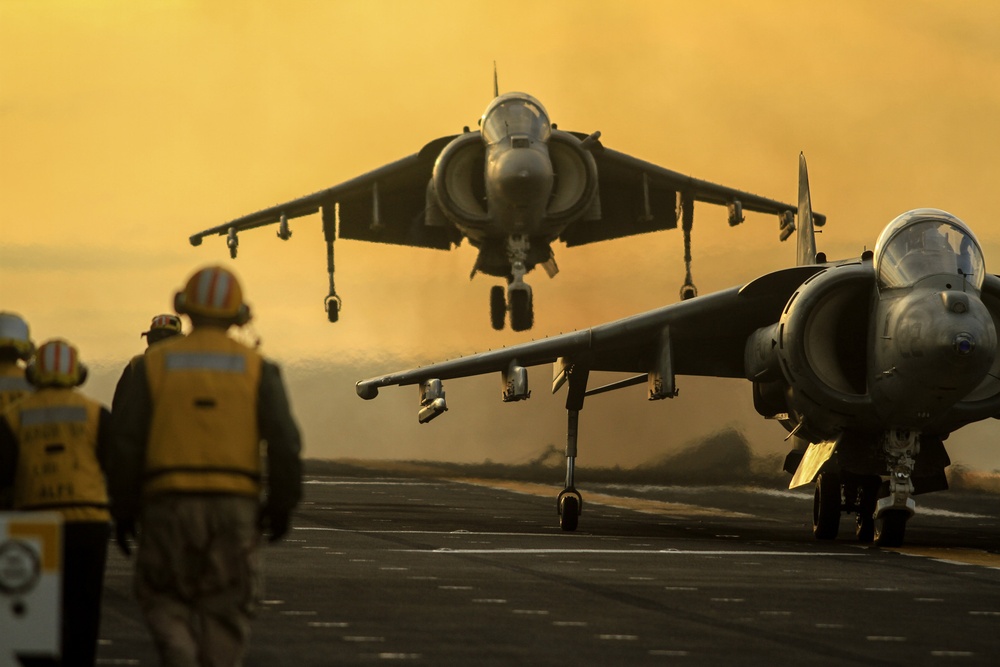 Founded on November 10, 1775, the United States Marine Corps has been a vital branch of the US Navy for centuries (Impressive Machines). The Marines have special units, and weapons for responding to emergencies everywhere in the world – and they have shown their courage and effectiveness in many wars.

The marines defeat their targets by using modern weapons and their advanced training to deceive and surprise. They are prepared for the most unpredictable and challenging threats.

But, this is only possible because they have reliable and powerful weapons and equipment… Without cutting-edge weapons, they couldn’t perform the bravest missions all around the world.

The Harrier II is a ground-attack aircraft with one powerful engine that accurately performs vertical or short takeoff and landing. This makes it one of the most versatile aircraft ever built. It is mainly engaged on multi-role or light attack missions and provides exceptional air support to the ground forces.

The manufacturing of the first AV-8B Harrier II started in 1981, and it took its first successful flight on November 9, 1978. This aircraft has superior cruise features, higher lift, and of course, it can take off vertically, which is its main strength.

With its advanced and futuristic radar system, the Harrier can operate well in tough weather situations and darkness as well.

It weighs around 31,000 pounds and has a speed of 647mph. In addition, it can carry two cannons of 25mm each, along with 9,200 pounds of missiles, rockets, bombs, and additional fuel tanks. So, it is powerful enough to face the most modern aircraft out there.

The Bell AH-1Z Viper is a modern version of the Cobra attack helicopter. This American double-engine attack helicopter is specially made for the Marines. “Zulu Cobra” is another name for AH-1Z, and it belongs to the AH-1W SuperCobra family.

The Viper includes the latest technology, comprising a four-blade, composite supreme rotor system, an advanced target detection arrangement with an uprated transmission, which makes this helicopter a really powerful machine for the Marines.

The helicopter offers armed escort, anti-armor, fire support coordination, and visual/armed reconnaissance abilities that are extremely helpful during an attack.

The helicopter is mechanized by twin engines with 1,800shp General Electric T 700 turboshaft, and it can pack sixteen Hellfire missiles and hit an air-to-air target with AIM-9 Sidewinder missiles.

The magnificent M252 81mm Mortar is also a perfect weapon for the marines deployed all around the world.

This medium-ranged, precise, and effective mortar has the capability of targeting between 4,500 yards to 5,650 yards. This advanced mortar uses a Fire-Control System that helps escalate the rate of fires and enhance set-up times and accuracy.

The M252 Mortar is accurate and responsive with a wide range of ammunition such as HE (High Explosive), TP (Training Practice), or ACERM (Advanced Capability Extended Range Mortar).

This makes it perfect for attacking when the target is close. Additionally, the low-angle or ground-level fire feature of the M252 Mortar makes it capable of neutralizing its targets in spots that are difficult to reach.

The Marines Are Equipped to Kick Ass Wherever They Go

The U.S. Marine Corps shows great moral and physical courage in the most distressing conditions. They are one the toughest men and women of the US Armed Forces.

That’s why they need great weapons whenever they go. But, the fighting spirit, along with highly advanced and powerful weapons, enables them to withstand the hard times and make them invincible with an even harder resilience.