How To Provide Astronauts With Fresh Food? Grow It In Space, Says NASA 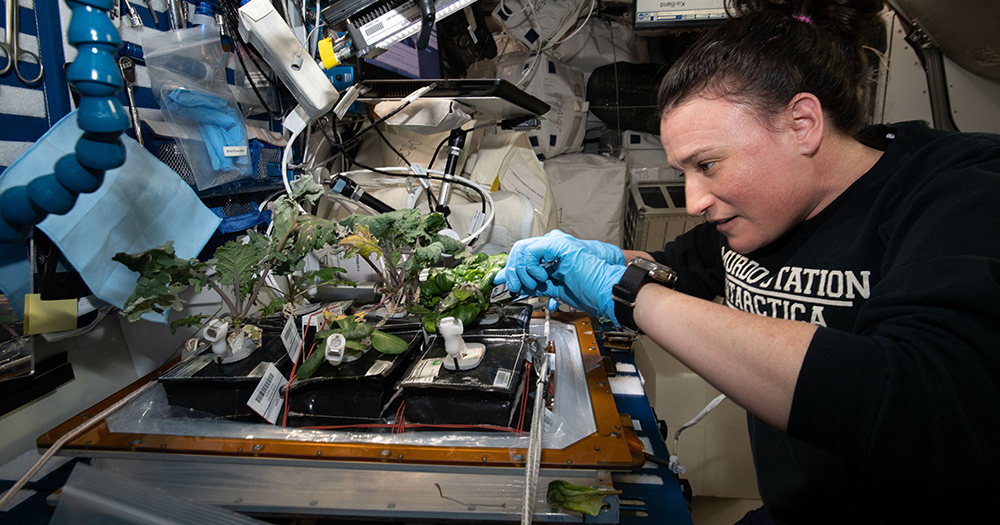 It is hard for astronauts living in space eating the same packaged food all the time.  If astronauts are to ever settle on Mars or make longer voyages further into space, solutions will need to be found to grow their own crops and become self-sufficient in space. Pre-packaged food degrades over time, and in the future, it may take too long to deliver food and resources from Earth to Martian settlements.

NASA scientists want to reduce menu fatigue for astronauts and grow more delicious veggies in space.  The US Department of Agriculture (USDA) is helping NASA with research on how to use microgreens, ‘small, nutritious plants that can be easily grown and eaten without the need for extended crew management.’

Growing plants in space since 2002

Astronauts have been working on solutions for growing food in space for quite some time.  Since 2002, two years after the first resident astronauts arrived at the International Space Station, astronauts have created different farming projects in Space.

One of the first projects involving plants at the International Space Station was called Lada; this was a wall-mounted greenhouse that astronauts used in experiments to create a source of fresh food.

Astronauts also created European Modular Cultivation, a second facility which is also used to study plants and conduct other experiments.

Since then, NASA has developed Veggie (Vegetable Production System known as Veggie). ‘The Veggie garden is about the size of a carry-on piece of luggage and typically holds six plants.’ Its purpose is to help NASA study ‘plant growth in microgravity while adding fresh food to the astronauts’ diet and enhancing happiness and well-being on the orbiting laboratory.’

NASA has also developed the Advanced Plant Habitat (APH), ‘like Veggie, which is a growth chamber on a station for plant research. It uses LED lights and a porous clay substrate with controlled-release fertilizer to deliver water, nutrients, and oxygen to the plant roots.’

These small-scale crop production projects carried out in space so far have helped contribute to the research of a much bigger project that the Kennedy Space Centre has been developing since 2019.

Kennedy Space Centre is currently developing a prototype crop production rig project called Ohalo III which will eventually launch on the Mars Transit Vehicle. This rig is a test platform for new technologies and water delivery concepts to help plants grow in space. The rig will give astronauts a pick your own farming experience, allowing them to pick and eat a variety of “salad-type crops,”

In future years we will learn how successful or otherwise the Ohalo III project will be in guiding the development of food production systems on the surfaces of the Moon and Mars.

The benefits for people on Earth when astronauts learn to farm

You might be wondering what the benefit of Space Farm Production has been for the rest of the taxpayers on Earth? Are our billions of investments worth it so that our astronauts can enjoy fresh lettuce in their sandwiches or not get scurvy on their long voyages like the pirates of the olden days?

There have been a couple of benefits that will have some practical applications here on Earth.

Howstuffworks.com describes two special findings that have happened as a result of astronauts trying to grow plants in space.

Experiments in space with ultraviolet light have resulted in the creation of a device called Bio-KES , which converts ethylene into carbon dioxide and water. A device like Bio-KES can be ‘used in food storage units and display cases could help increase the shelf life of produce, flowers and other perishable items … It can also be used to kill pathogens like anthrax, help wounds heal faster and improve the effectiveness of some cancer treatments.’

Another discovery which resulted from scientists trying to grow plants in space is scientists observing how plant cell walls react to the space environment; I think that they may also be able to learn how to create genetically modified trees for more efficient paper production. If successful, this would result in faster-growing trees and mean less deforestation.

It seems like a fair trade-off; the vast amount of money spent on researching how to grow food in space means astronauts get fresh veggies; we get awesome technology that can help store food longer, cure cancer and maybe solve the deforestation problems on Earth.