Can an Average Out-Of-Shape Person Safely Travel to Mars? It Depends Scientists Say

Space travel has a huge toll on the body. Can a mathematical model assess whether someone is fit to travel to Mars or not and what that means for the future of space tourism? 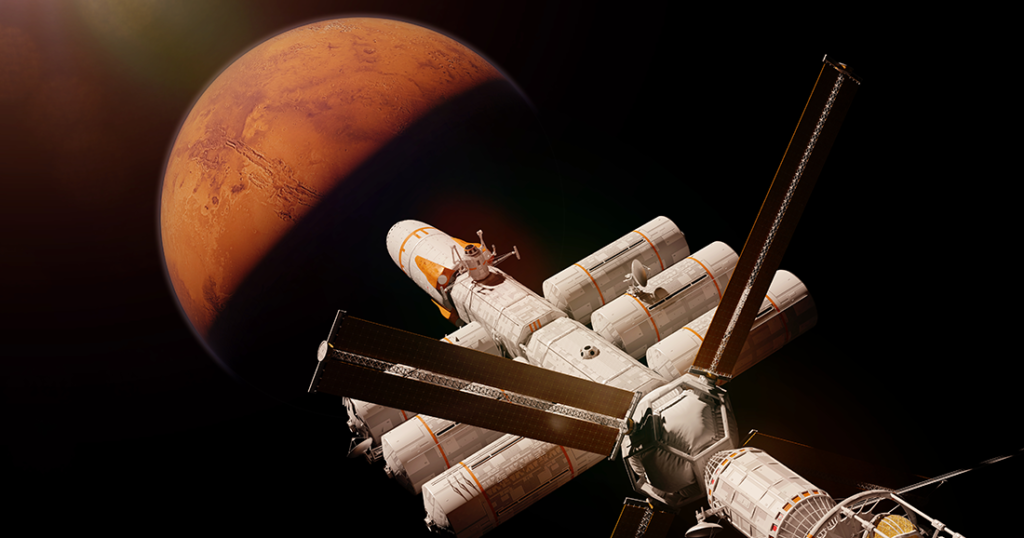 As the space industry continues to grow, an increasing number of people are resorting to commercial space flight agencies to fulfill their space-related dreams. However, a key question still remains: Is it actually possible for just anyone to make the trip to Mars? And if so, how fit do you have to be?

These are questions that a group of space medicine specialists from the Australian National University (ANU) would like to find out the answers to.

The team has been developing a mathematical model based on their observations of trained astronauts on board the International Space Station (ISS). The data in the model considers the effect of microgravity on the bones and factors in how the body reacts to increased radiation in space. Even though data from middle-aged and well-trained astronauts inform the current model, the researchers hope to expand the model’s capabilities to include data from commercial spaceflight.

They’re hoping to develop a model that can simulate the effect of space travel on relatively unhealthy individuals who already have heart conditions (i.e., untrained civilians). They’re hoping this model will provide a more accurate depiction of what would occur in space if an “average” person were to embark on a journey there.

This model can help us understand how much health and safety guidance we need to give astronauts before going to Mars!

Mathematical model to determine the safety of traveling to Mars

A lot of work needs to be done before humans can go to Mars. This model could help with that by showing the effects of future missions on astronauts. Scientists will be able to figure out if astronauts can travel safely to Mars and keep doing their jobs once they get there.

The dangers of microgravity and solar radiation

Dr. Lex Van Loon and his colleagues studied how astronauts might be affected by going to Mars. They found many potential dangers, but the most significant danger is spending time in microgravity.

The exposure to potentially harmful radiation from the Sun and other cosmic sources will also result in fundamental changes to their bodies.

Microgravity is the name for the low amount of gravity experienced in space. It is known to cause muscle and bone density loss and affect organ function, eyesight, and the cardiopulmonary system.

The importance of Australian research in the commercial space sector

According to Van Loon’s news release issued by the Australian National University (ANU), the importance of their research cannot be overstated, not only because of proposed missions to Mars but also of the growing commercial space sector.

Are you fit for space travel?

The researchers are using mathematical models to simulate the effects of various health conditions on a person’s ability to make the trip. So far, they’ve found that a person with diabetes is almost entirely incapable of making the trip, and a person with a heart condition is also at a disadvantage. However, a person without any health problems seems to be able to make the trip relatively quickly.

Dr. Emma Tucker, an astrophysicist and emergency medicine registrar, found that exposure to zero gravity can cause the heart to become less active.

Because of gravity, people’s legs swell up. But in space, there is no gravity, so the fluid in your body shifts to the upper half of your body. This causes a reaction that tricks the body into thinking there is an excessive amount of fluid. As a consequence of this, you will find that you have to use the restroom more frequently, that you will begin to eliminate excess fluid, that you will not feel thirsty, and that you will not drink as much, which will lead to your body becoming dehydrated while you are in space.

According to Tucker, this is why astronauts who have just returned from the International Space Station are seen passing out when they step foot back on Earth or need to be transported using wheelchairs.

The longer people are away from Earth, the more challenging it will be for them to readjust to the planet’s gravity.

The return of the NASA twins: Mark Kelly’s story

In the NASA Twins Study, Mark Kelly was in space for more than a year. When he returned, he had terrible pain, swelling, and other symptoms (as he described in his book Endurance: A Year in Space, a Lifetime of Discovery).

Why astronauts need to be prepared and fit

The challenges for missions to Mars are made more difficult because it takes a long time for messages to travel between Earth and Mars. This can be up to 20 minutes, which means that astronauts have to be able to do their jobs without help from people on Earth.

This is especially important in emergencies. As Van Loon explains, “There is not going to be anyone on Mars who can assist an astronaut if they have a medical emergency or pass out when they first step out of the spacecraft… Because of this, we need to be absolutely certain that the astronaut can adjust to the gravitational field of Mars and is in good enough shape to fly.”

Van Loon states that during those initial minutes, which are critically important, astronauts need to be able to function effectively and efficiently with minimal assistance.

What does the model show?

Their model is predicated on a machine learning algorithm that uses astronaut data from previous expeditions aboard the International Space Station and the Apollo missions to simulate the dangers of a trip to Mars.

During testing, it was demonstrated that it could simulate critical cardiovascular and hemodynamic changes that occur after a long space flight and under various gravitational and fluid loading conditions. The findings are encouraging because they suggest that astronauts can continue functioning normally even after spending months in microgravity.

Plans to update the model

Additional improvements could be made to incorporate age-related health concerns.

In the future, the researchers hope that it will be possible to simulate the effects of prolonged exposure to microgravity on the development of children and fetuses. This research is essential if we hope to establish permanent human settlements on the Moon, Mars, or other celestial bodies.

However, in the meantime, we’ll just have to keep sending grown adults into space and hope they don’t come back too damaged.