Luckily for us, this black hole is located some seven billion light-years away. 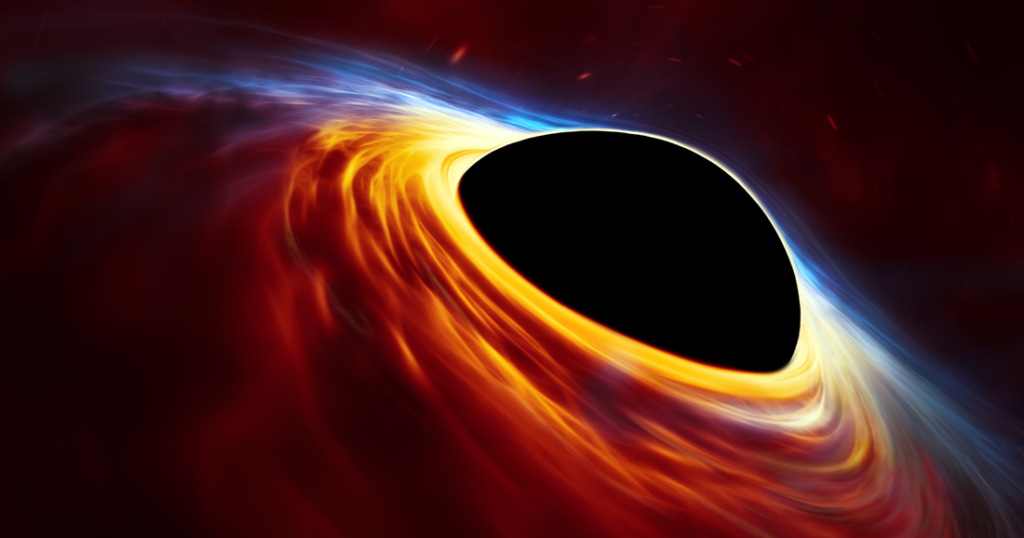 A few months ago theinfographicsshow shared the discovery of PKS 2131-021 (two supermassive black holes which are on a collision course towards each other).

When PKS 2131-021 was first discovered, astronomers predicted the collision of these two black holes could rip space apart.

As huge as PKS 2131-021 is, with an estimated mass that will reach a few hundred million times that of our Sun when they collide, their combined destructive power is nothing in comparison to J114447.77- 430859.3 which is said to have 3 billion times the mass of our Sun.

The discovery of one black hole may seem as terrifying or thrilling as another, but the one that this international team of researchers has discovered has the fastest growth rate they have ever seen. It can swallow the equivalent of one Earth every second.

This black hole is already 3 billion times the mass of our Sun, and the more it consumes (the scientific term “accretion”), the bigger it gets. During the accretion process, it pulls matter from a thin disk of gas and dust, then spins it around.

No need to worry, though; J114447.77-430859.3 is located some 7 billion light-years away from Earth. That’s a lot of galaxies with billions of planets for main courses and desserts before it could ever be of any risk to us. No speculation that it is going to consume anything our way anytime soon.

Other black holes about the same size as this one stopped growing billions of years ago. However, this one is still growing and is now 500 times bigger than Sagittarius A*, the supermassive black hole at the center of the Milky Way.

Scientists have concluded from its size that the recently discovered black hole is the fastest-growing black hole in the last 9 billion years.

Why haven’t we seen it before?

Scientists such as Christopher Onken, who works at the Research School of Astronomy and Astrophysics at the Australian National University (ANU), said astronomers have been looking for things like this for over 50 years, and thousands of dimmer ones have been found. Still, this incredibly bright one had gotten past them.

Did something terrible happen?

Onken is trying to figure out why this black hole is different, why this huge quasar shines more brightly than any other. He speculates that perhaps two big galaxies crashed into each other, sending a lot of matter into the black hole to feed it.

The fast addition of matter from such an event to the black hole’s surface would possibly account for the cause of a quasar (quasar named SMSS J114447.77- 430859.3) to send out so much energy. It shines 7,000 times brighter than all the stars in the Milky Way.

Many skywatchers can observe it from Earth

Many skywatchers can observe it from Earth under the right conditions. When seen from Earth, the quasar has a magnitude of 14.5. This means that it is slightly less bright than Pluto and could be seen by skywatchers with good telescopes in a very dark place.

Christian Wolf, an associate professor at ANU and member of the research team, said that he doesn’t think astronomers will find another black hole growing at this rate or powering a quasar of this size or larger.

Wolf doesn’t think there is much more sky where things like this could be hiding. He is pretty sure this record won’t be broken.

A paper about the discovery has been sent to the journal Publications of the Astronomical Society of Australia, but it hasn’t been peer-reviewed yet. It will be available through the arXiv database.

Feature image credit: Supermassive blackhole with torn-apart star by ESO/ESA under CC BY 4.0