Life on Mars is hard to prove, but we may finally have the first piece of the puzzle using carbon readings from burnt mud samples collected by the Curiosity rover. 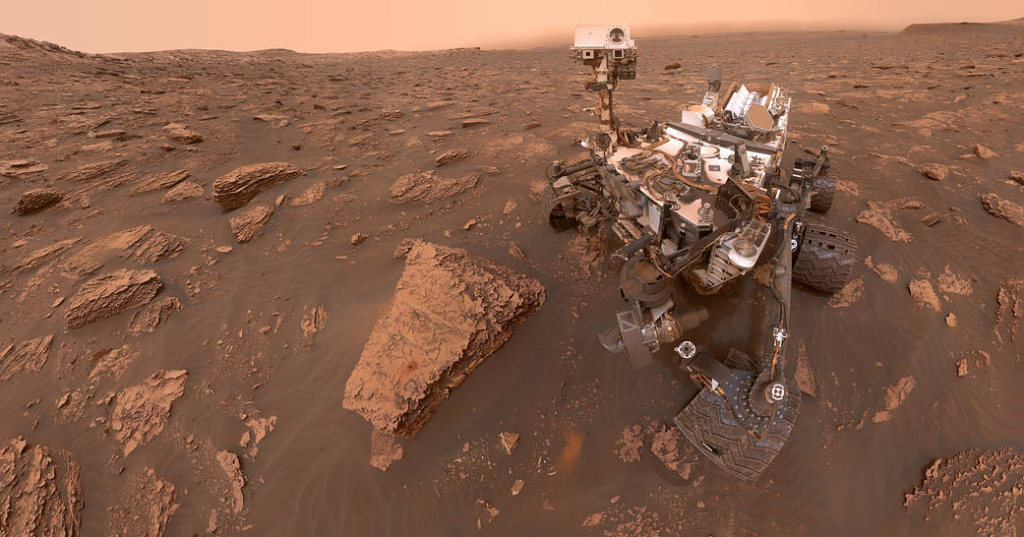 Scientists have been analyzing samples taken from mudstone rocks by the Curiosity rover in the “Yellowknife Bay” formation of Gale Crater, once the location of an ancient lake on Mars. Mudstone was produced at Gale Crater when very fine sediment in water (produced by the physical and chemical weathering of volcanic rocks) settled on the bottom of a lake and was subsequently buried.

Although the experiment was carried out in 2014, it took several years of analysis before researchers could comprehend the data from the Curiosity rover and place the findings in the context of the mission’s other discoveries at Gale Crater.

Scientists now agree that if life had ever existed on Mars, the Gale Crater area would have provided a suitable habitat. Analyzing the mudstone, researchers believe other conditions conducive to life were present in Gale Crater in addition to liquid water and organic carbon. These conditions included sources of chemical energy, low acidity, and other elements necessary for life, such as oxygen, nitrogen, and sulfur.

For the first time using old samples taken by the Curiosity Rover in 2014, scientists have determined the total amount of organic carbon levels in Martian rocks. Organic carbon is an essential component in the molecules that make up life.

For prebiotic chemistry and biology, total organic carbon is one of the metrics [or indicators] that tells us how much material is accessible to be used as a feedstock, according to Jennifer Stern, employed by the Goddard Space Flight Center in Greenbelt, Maryland, for the United States Space Agency (NASA),

The amount of organic carbon discovered by the Curiosity rover ranged from 200 to 273 parts per million. Scientists say such a measurement is comparable to or even more than the amount that has been discovered in rocks in areas of the Atacama Desert in South America that have low levels of life. It is more than what has been detected in Mars meteorites.

Carbon may be an indicator of life

Carbon attached to a hydrogen atom is referred to as organic carbon. Carbon serves as the foundation for organic molecules, which serve as the fundamental units of all recognized forms of life.

However, given that organic carbon can also originate from nonliving sources, the discovery of such carbon on Mars does not conclusively demonstrate the presence of life on the red planet. It may, for instance, originate from meteorites or volcanoes, or it may be formed locally due to surface reactions.

Before, organic carbon had been discovered on Mars; however, previous measurements only produced information on specific compounds or represented measures capturing only a portion of the organic carbon in the rocks on Mars. The new measurement estimates taken by the Curiosity rover aggregate the amount of organic carbon that can be found in these rocks.

Mars may have once had an atmosphere like Earth’s

Even though the surface of Mars is currently inhospitable for life, there is this evidence that the climate on Mars was more similar to that of Earth and had a thicker atmosphere billions of years ago, when rivers and oceans were filled with flowing liquid water.

Life could have been sustained by organic carbon

Even though liquid water is necessary for life as we know it, scientists believe that life on Mars, if it ever evolved, could have been sustained by crucial ingredients such as organic carbon if present in sufficient amounts.

How was the research proved?

The researchers were able to prove their research using samples that the Curiosity Rover had transferred to Sample Analysis at Mars (SAM). An experiment using heat was performed on the samples in 2014. Researchers are now ready to share their findings of how it was done and what it all means.

Inside the SAM instrument is an oven that heats the powdered rock to progressively higher temperatures. In this experiment, oxygen and heat were used to convert organic carbon to carbon dioxide (CO2); the amount of CO2 produced was then measured to determine the amount of organic carbon in the rocks.

The addition of oxygen and heat causes the carbon molecules to disassemble, producing carbon dioxide (CO2) through a reaction between carbon and oxygen. Because some carbon is bound up in minerals, the sample is heated to extremely high temperatures in the oven, which causes the minerals to break down and free the carbon, which can then be converted into CO2.

Isotopes are variations of an element that have slightly varying masses due to the presence of one or more additional neutrons in the centers (nuclei) of their atoms. These variations are referred to as weights. By way of illustration, carbon-12 possesses six neutrons, whereas the heavier carbon-13 contains seven neutrons.

Because of this process, SAM was also able to measure the carbon isotope ratios, which contributed to a better understanding of the carbon source.

Carbon measured by isotope ranges is not a reliable indicator of life, but it doesn’t rule it out

Additionally, because the range of these isotopes overlaps with that of igneous (volcanic) carbon and meteoritic organic material, they cannot be utilized to support a biological origin for this carbon, which are the most likely sources of this organic carbon. Isotopes can’t truly be utilized to suggest a biological origin for this carbon, even though biology can’t be fully ruled out either.

Hopefully, we will find out more in the future, and this must be good news for Musk, who is intent on creating space colonies on Mars.