Paleontologists finally reveal the real reason behind why some dinosaurs had such tiny arms. 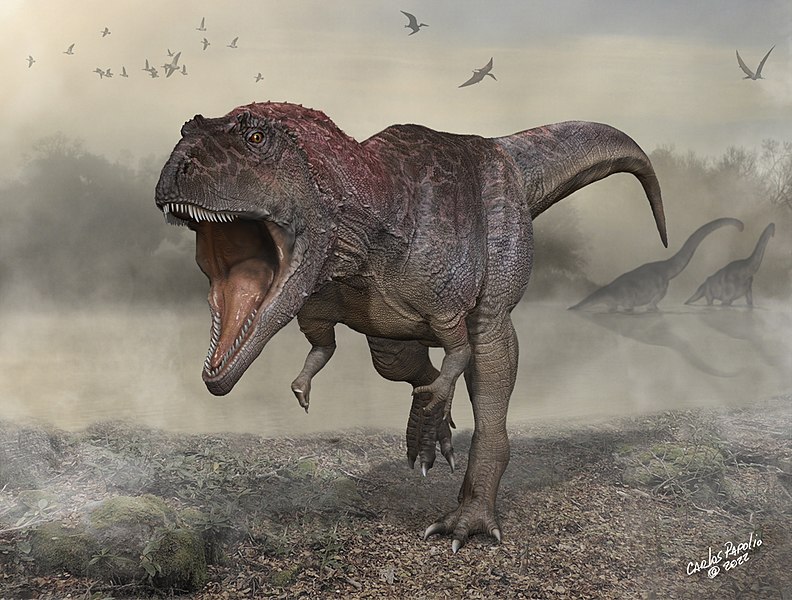 In a new report published by Cell Press, researchers revealed that they found a new species of gigantic dinosaur dubbed Meraxes gigas. M. gigas, for short, shared several morphological traits with Tyrannosaurus rex. These traits include a gigantic skull and tiny front arms, which appears to have developed independently in both of these massive dinosaur theropods. The new species is not closely related to tyrannosaurs, though. It belonged to a distinct group of dinosaurs known as the carcharodontosaurids, gigantic and predatory theropod dinosaurs featuring hollow bones and limbs with three primary digits. They are among the largest carnivores to have ever walked across Earth.

Juan Canale, the project lead at Ernesto Bachmann Paleontological Museum in Neuquén, Argentina, explains that “the fossil of M. gigas shows never seen before, full areas of the skeleton, including the arms and legs that helped us to grasp some evolutionary patterns and the anatomy of Carcharodontosauridae.”

The discovery of Meraxes gigas

The recently reported carnivore was found in 2012 while conducting field research that was in part supported by the National Geographic Society. What is today Argentina’s Patagonia region was once a hunting ground for a massive predatory dinosaur some 100 million years ago. M. gigas was over four tons (8800 lbs) in weight and around 36 feet (11 meters) long. It has been given the name Meraxes gigas in honor of Meraxes the dragon from George R.R. Martin’s Fire fantasy novel and A Song of Ice.

T. rex and small-armed predatory dinosaurs were formerly assumed to have no use for their forearms. And as a result, the appendages gradually became smaller. However, the study’s authors claim that their finding indicates that things may be a little more complicated.

The findings showed that giant predators like M. gigas might have had different evolutionary uses for their ludicrously short forelimbs than previously believed. The authors clarified that M. gigas did not inherit the T. rex’s short arms or vice versa. These species are very distant from one another on the evolutionary tree. For instance, M. gigas went extinct millions of years before T. rex appeared. It, therefore, autonomously evolved its little arms.

“There is no direct relationship between M. gigas and T. rex,” according to Canale. “Instead, it is thought that each species may have benefited physically from having small arms.”

It is more difficult to comprehend how these little arms work. The greater the heads of dinosaurs like M. gigas and T. rex, the smaller their limbs got. The study’s authors also concluded that the head was more likely used for hunting-related movements.

The discovery is helping paleontologists.

Paleontologists already benefit from the discovery in their understanding of the carcharodontosaurids. The Giganotosaurus – one of the largest carnivores to ever live – and the star of the new Jurassic World film: Dominion is also a member of this dinosaur group, whose name translates as “shark-toothed lizards.”

Thomas Carr, a Wisconsin-based paleontologist who was not involved in the study, argues that the discovery “helps fill in the diversity of this group of dinosaurs and offers us a more realistic picture of evolution and ecology of the time. The total number of dinosaurs and other prehistoric animals is likely greatly underestimated. Therefore adding a new species to the family tree is good.”

An international team of paleontologists discovered a gold mine of dinosaur fossils ten years ago as they were scanning the northern Patagonia region. They discovered M. gigas’s fossilized remains, which included a nearly complete arm, skull, and lower body. The skeleton is now one of the most complete carcharodontosaurids ever discovered.

The skull of M. gigas was discovered to be embellished with furrows, crests, bumps, and tiny hornets, which the researchers think the dinosaur utilized to entice prospective mates. According to Canale, “such ornamentations appear later in the development when the individuals become adults. These characteristics were probably used to attract prospective mates.”

While the sexual selection is a powerful driving force in evolution, we can’t be assured about this because we can’t watch their behavior in person.

“Both species underwent a comparable evolutionary transition due to their hunting strategies,” said research co-author and National Geographic Explorer Peter Makovicky, a paleontologist at the University of Minnesota. He claims that as their limbs shrank, their heads became bigger. “There was a function movement from the forelimb to the cranium, especially those connected to prey capture.”

Makovicky contends that the limbs reduced as these dinosaurs began relying more on their heads and fewer on their arms. He also draws attention to the fact that these dinosaurs’ arms remained strong, indicating that they may still have had some use.

Small arms aren’t M. gigas’s only peculiar trait. It also had claws on the tips of its feet that resembled the sickle-shaped weapons used by velociraptors. The scientists also discovered that M. gigas’s skull was decorated with crests, bumps, and ridges, which they think the dinosaur used to attract potential mates.

These characteristics’ actual purposes might never be revealed. Fossils only provide limited information about how dinosaurs behaved, with paleontologists developing theories by contrasting dinosaur anatomy with current animals. Experts can only guess why M. gigas appeared the way it did without sufficient information.

Even if there are many unanswered questions, discoveries like M. gigas contribute to a fuller understanding of the prehistoric world.

Scientists hope to gain further insight into how this species’ physique compares to other carcharodontosaurids by examining the dinosaur’s arm and brain case closely.

While every bone from M. gigas will be carefully examined, the researchers are also pausing to acknowledge this extinct monster.

“I’ve been working in this field for almost 30 years. I’ve dug up a lot of stuff all over the world, but this one is unique,” adds Makovicky. Beyond its scientific worth, the dinosaur is fascinating because of its enormous size and gargoyle-like skull.

The researchers anticipate how M. gigas fossils can help explore and answer other questions. The National Geographic Society and the American National Science Foundation funded the project.