SpaceX CEO Elon Musk has spoken about the challenges of establishing a human colony on Mars. 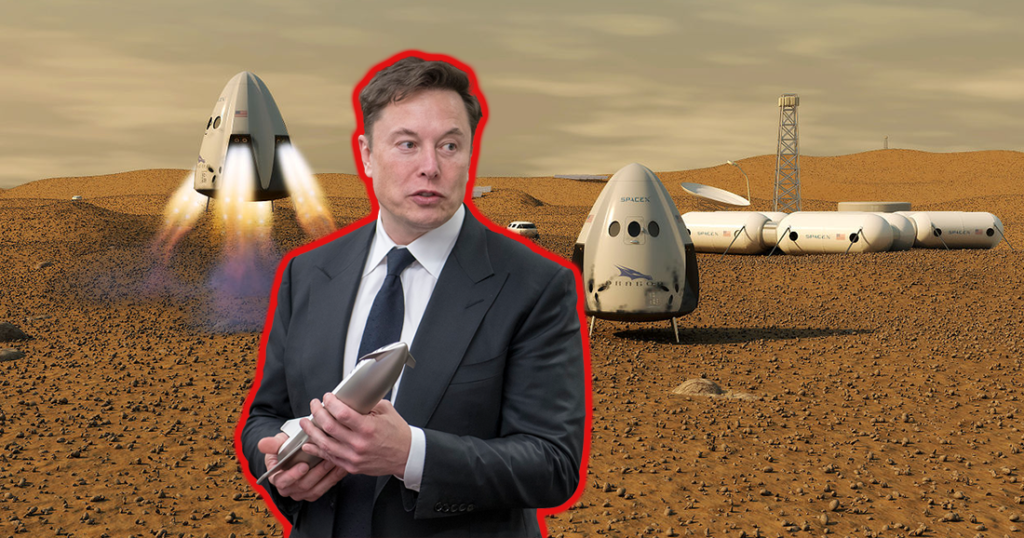 The CEO of SpaceX and a strong proponent of human exploration of Mars, Elon Musk, believes that colonizing Mars is not for the faint-hearted. According to him, the first settlers to arrive on Mars should not expect a glamorous lifestyle or even safe living conditions during their stay.

Musk issued the warning while discussing SpaceX’s attempts to design a reusable “Starship” capable of transporting dozens of individuals to Mars – along with the supplies they’ll need to survive and establish a thriving colony in the future. In a video interview he had with Chris Anderson, the head of TED conferences, Musk said, “It is very important to emphasize that Mars, especially in the beginning, will not be luxurious.” He continued, “It will be difficult, cramped, dangerous, hard work.”

Early launch to Mars has risks

Musk admitted that attempting an early launch includes a certain amount of risk. The billionaire compared Mars recruitment attempts to a 19th-century campaign for an Antarctic expedition led by explorer Ernest Shackleton. Although the ad has already been proven as a hoax, it did appeal to persons eager to embark on a “dangerous expedition” with the assurance that a safe return was “doubtful.”

Elon Musk stated during his explanation of the voyage to Mars, “‘It’s dangerous and cramped,’ says the sales pitch for going to Mars. You might not be able to return. It’s difficult and necessitates a lot of effort.”

SpaceX has already started developing prototype designs for the 400-foot “Starship” rocket, as well as a launchpad in Florida that can handle the gigantic vehicle. Musk added during the interview that SpaceX’s first orbital launch of the shuttle was “looking promising” and would happen “in a few months.”

To build a self-sustaining colony, Musk claimed it would be necessary to land “something on the order of a thousand spacecraft,” each carrying roughly 100 passengers.

The world’s richest man assured Anderson that SpaceX would figure out a price point for future rockets to Mars that most people would afford. He cited a hypothetical ticket price of around $100,000 per person.

Life on Mars would certainly be difficult.

The surface of Mars is rocky, with several canyons and volcanoes. The planet also has a gravity around one-third that of Earth, as well as a thinner atmosphere that is un-breathable for humans. A report published in the Insider report showed that “Someone without appropriate equipment or gadgets would die in minutes on Mars, which is due to the planet’s low atmospheric pressure.”

Musk wants to construct a full-fledged city on Mars

In the coming decades, SpaceX wants to develop a self-sustaining city. The billionaire, though, informed Anderson that he might have been long dead before his wish would come true.

In 2019, Tesla Inc. Boss estimated that building a self-sustaining city on Mars would require one million tons of cargo. According to him, it is a process that would cost anywhere from US$100 billion to US$10 trillion.

According to Anderson, SpaceX CEO Elon Musk expects the Starship to make its first orbital launch “within a few months,” pending approvals.

Mars should expect humanity in the next ten years

Musk said last year that humanity would reach Mars within the next ten years. However, establishing a viable colony would take much longer. A Mars colony, according to the billionaire, will help save humanity’s future from multiple existential threats.

Musk told Anderson that he hopes those who would populate Mars do so with the intention to “rethink society.”

“I believe this is critical for optimizing the likely life span for humanity or consciousness,” Musk told Anderson. “A lot of things have the potential to bring human civilization to an end. Things like World War III, super volcanoes, dramatic climate change, a large asteroid, or any number of other factors.”Musk, who is now aiming to buy Twitter outright, has various worries, including a human colony on Mars. The billionaire is willing to put up $15 billion of his own money to close the deal, according to The Washington Post on Tuesday.