Creatures that we love can't build spaceships, but we can bring them with us. Elon Musk 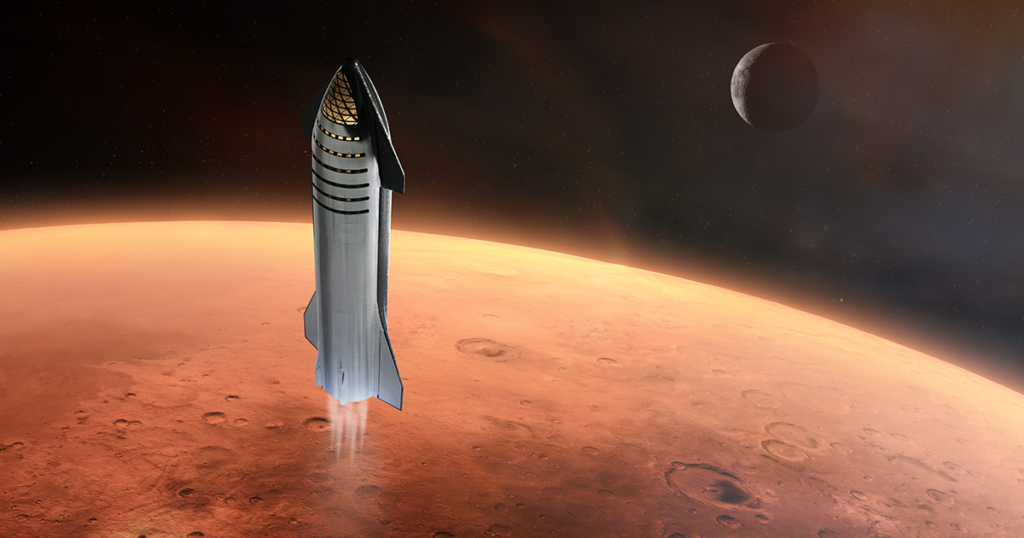 In Elon Musk’s most recent presentation for SpaceX, which he delivered from the Starship development site in Boca Chica in Texas, he has shared an animation video with the press demonstrating his aspirations for the next generation of spacecraft.

Musk’s latest animation video has been described as a ‘fanciful planet-jumping vision‘ by Darrell Etherington a journalist working for techcrunch.

Although nothing ground-breaking is revealed about the current status of the Starship project, Musk covers some hot topics about problems the company still needs to solve.

The company plans to build many more launch sites. Due to rocket lift-offs being quite loud, future launch sites will need to be at ‘least “20 or 30 miles away from a major city” in order to minimize disruption’. Musk envisages that the company will need to continue developing sea-based floating spaceports like SpaceX is already developing from old oil platforms.

The animation shows’ in-orbit docking of two Starship spacecraft’, leading the discussion about ‘how they’ll be able to refuel in space to top-up for the trip to Mars.’ Musk advised SpaceX spacecraft dock with the Space Station all the time, but the company still needs to solve details of other space docking processes.

Why does Musk use a Noah’s Ark justification for massive spending on SpaceX?

Etherington observing the event says that Musk uses a ‘Noah’s ark’ justification’ for the massive resources used in SpaceX projects. He refers to a recent goal Musk added to SpaceX centered ‘around broad Earth species preservation.’ Etherington writes Musk ‘didn’t reference Noah’s Ark by name, but the analogy works, as you can see:‘

‘For those who really care about not just the humans but all the life on Earth it is very important essential that over the long term that we become a multi-planet species, and ultimately even go beyond the solar system and bring life with us. You know we are life stewards, life’s guardians, […] the creatures that we love, they can’t build spaceships, but we can and we can bring them with us and I think that’s pretty important for those that that care about the environment and care about all the creatures on Earth.’

Musk’s Noah’s Ark sentiment perhaps reflects Stephen Hawking who was famously quoted in 2017 for saying Humans Must Leave Earth Within 600 Years. ‘We are running out of space and the only places to go to are other worlds. ‘ NBC news quoting Chelsea Gohd, Futurism ‘Stephen Hawking has boldly claimed that humans will need to eventually leave Earth in order to survive’. This is a view that Musk seems have long held.

September 2016 during an interview for National Geographic Channel’s MARS with Ron Howard, Musk is quoted to have said;

“The future of humanity is fundamentally going to bifurcate along one of two directions: Either we’re going to become a multiplanet species and a spacefaring civilization, or we’re going be stuck on one planet until some eventual extinction event,”

Musk’s convictions of this belief are still very evident in his latest presentation.

Is too much money focussed on space projects?

Some people think more money should be spent addressing problems here on Earth rather than excessive amounts on SpaceX projects. Here is how Musk responds to his critics, agreeing “more than 99% of our resources should be oriented towards solving problems on Earth” which he says already is the case.

When does Musk hope the next Starship launch will be?

SpaceX Starship program has been plagued with many setbacks, in April 2021, the Guardian reported ‘ For the fourth time in a row, SpaceX has lost one of its Starship prototypes during a high-altitude test launch’

Journalists attending the meeting were very keen to find out when the next Starship launch will be. Musk is waiting on FAA approval, saying only that he’s “highly confident that we’ll get to orbit this year” with a suggested date of around March. Timelines have constantly been shifting, from late 2021 to January 2022.