The Marine Corps’ Expeditionary Fighting Vehicle Was A $3.3BN Blunder

There were high expectations for the Marine Corps Expeditionary Fighting Vehicle... But after seven years of development, it underperformed in almost every way. 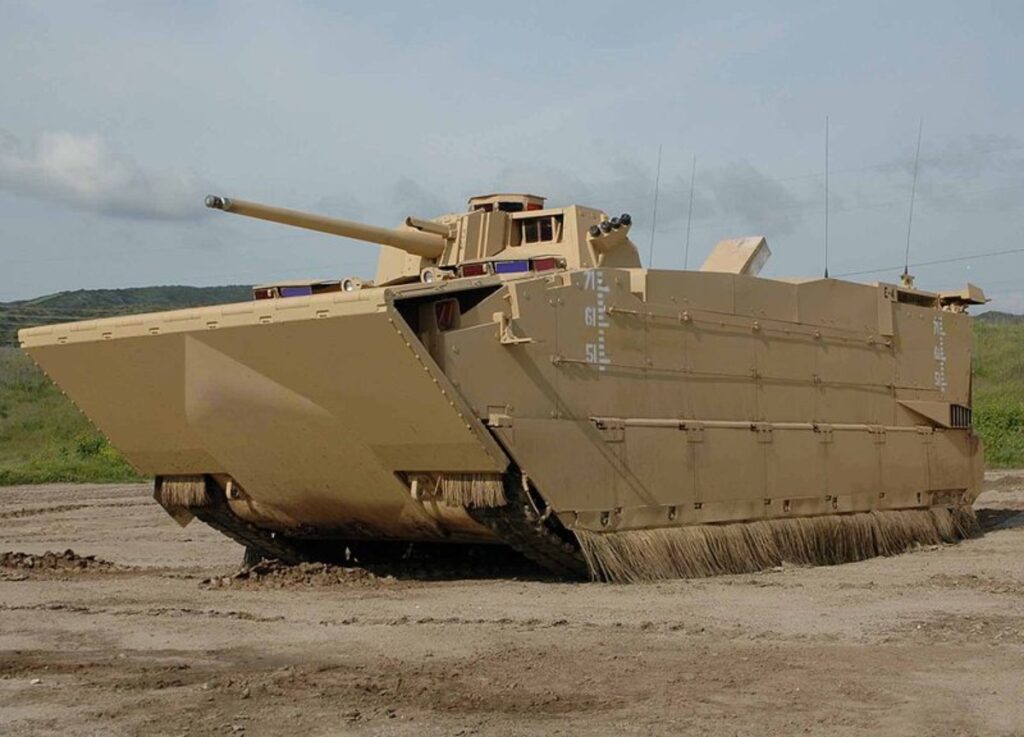 The expeditionary fighting vehicle was a General Dynamics Amphibious Assault Vehicle developed for the US Marine Corps.

It could carry a full Marine expeditionary unit and their equipment from ship to shore, providing them with armored protection once they were on land.

This vehicle was supposed to enter service in 2007. However, the program ran into numerous delays and cost overruns – and it was eventually canceled in 2011 after spending $3 billion on development.

The Expeditionary Fighting Vehicle was made to replace the AAVP-7A1

The expeditionary fighting vehicle program was first proposed in the early 1990s, but the Marine Corps awarded a development contract to General Dynamics in 2001.

It was an amphibious armored tracked vehicle designed to replace the AAVP-7A1.

It featured an aluminum hull, the commander’s station included a fire control system, as well as the primary and coaxial weapons. The vehicle was quite capable and armed with a 30 mm cannon, two machine guns, and four anti-tank missiles.

So, it looked pretty impressive and with a lot of potential to join the US Marine Corps as the next generation amphibious vehicle.

This vehicle had an Mk44 Bushmaster II 30 mm cannon, which fired up to 250 rounds per minute. Also, it had a general-purpose M240 7.62 mm machine gun with 600 ready-to-use rounds to be installed coaxially with the main armament.

The issues with the Expeditionary Fighting Vehicle

The Expeditionary Fighting Vehicle was designed to be fast, heavily armed, and with thick armor. However, it had several problems that ultimately led to its cancellation.

When it was tested to enter service, the challenges of warfare had already changed.

The Expeditionary Fighting Vehicle wasn’t designed to withstand increasingly powerful and sophisticated explosives employed by insurgent fighters in Afghanistan and Iraq. And to better cope with this threat, the vehicle would have to be up-armored… But, this would mean a considerable increase in its weight.

And a too heavy vehicle couldn’t serve as an amphibious vehicle for the Marines Corps.

Additionally, the vehicle had trouble in rough seas, meaning that it would have been unable to reach many of the beaches that Marines might need to assault. Moreover, the cost of each vehicle rose from an initial estimate of $12 million to over $22.3 million by 2007.

Expeditionary Fighting Vehicle (EFV) was an attempt to do something truly remarkable and failed horribly. But always a cracker to revisit and look at what was almost achieved when someone left the USMC unattended and they dared to dream #miltwitter #tanktwitter #usmc #EFV pic.twitter.com/SqEMS0aEyv

The Expeditionary Fighting Vehicle was supposed to be a game-changing amphibious assault vehicle for the US Marine Corps. However, its performance was far below expectations, and its costs per unit were much higher than the Marine Corps was willing to pay.

So, the vehicle couldn’t adapt to new warfare conditions, and due to its many problems, it ended up being a colossal waste of taxpayers money.