If We Encounter an Extraterrestrial Intelligence It Will Most Likely Be Artificial, Professor Claims

This professor at Cambridge University's department of cosmology and astrophysics will blow your mind with his views on what kind of extraterrestrial intelligence we might encounter. 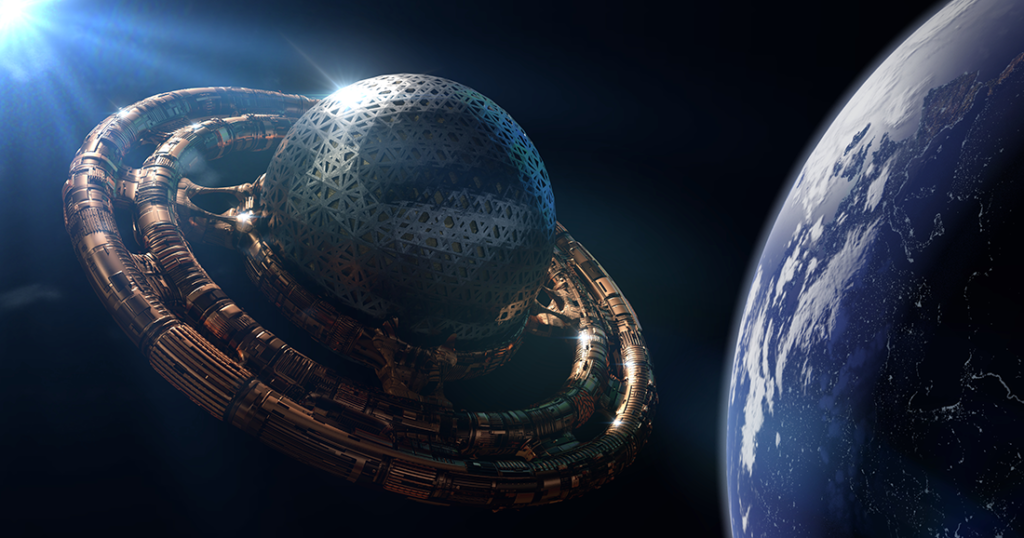 Martin Rees is an Emeritus Professor of Cosmology and Astrophysics at the University of Cambridge. His views on extraterrestrial intelligence are shared on theconversation.com. His views are pretty mind-blowing. The core point of his ideas is shared below and expanded upon.

Rees’ theories open up the discussion that different alien races may be older than our own and may have evolved at different rates, especially if the aliens experimented with combining genetic engineering with technology at some stage. AI, over billions of years, could have been able to make better and better versions of itself at a faster rate than Darwinian evolution.

Rees doesn’t think the first extraterrestrial intelligence humans will come into contact with is likely to be little green men. It is more likely to be AI-powered machines.

We need to rethink the Drake equation

Rees’ core ideas on extraterrestrial intelligence and AI revolve around his view that we need to rethink the accuracy of the Drake equation. The Drake equation was made in 1960 to figure out how many other civilizations in the Milky Way we might be able to talk to. The equation is based on a number of assumptions, such as how many planets there are and how long a civilization can send signals into space, which is thought to be between a thousand and a hundred million years.

Rees thinks that while organic civilizations such as humans might only last a few thousand years, aliens and humans could potentially leave behind an electronic diaspora that could live on for billions of years. Considering this, it looks like there may be more civilizations out there than we thought, but they would be electronic and AI.

Extraterrestrial intelligence could have once been biological and evolved into machines

Is it absurd to think that AI could have once been biological and evolved into machines? Fast forward through Rees’ theories and consider that maybe an alien race was once like people. They began experimenting with combining genetic engineering with technology to improve themselves, making cyborgs and having organic and inorganic parts. This gave AI the dexterity to build other machines which were more dexterous. This would be the first step of AI being able to recreate more AI.

Think this is hard to believe? Neuralink, a company owned by Musk, implanted a chip in a monkey’s brain, and it was able to play ping pong with its mind. Other neurosurgeons have helped a paralyzed man text his thoughts to a brain-computer interface. Imagine the stage of an alien race that is billions of years older than our own, evolving from cyborgs to fully machines.

Organic intelligence on the level of a human would then be a short part of “human history” before machines take over. So, if alien intelligence developed the same way, we would be very unlikely to “catch” it when it was still in biological form. If we did find alien life, it would probably be electronic rather than made of flesh and blood. It might not even live on planets.

Cyborg races could have evolved exponentially faster into AI-ruled machines.

How would AI evolve?

Even the word better is a human construct of thinking. Suppose AI-powered machines could reproduce and evolve without being motivated by an organic sex drive. If machines could develop their own algorithms and thoughts, what would the machine’s motivations be for producing and enhancing future machines?

Rees challenges us to even rethink the term “alien civilizations.” A “civilization” is a group of people living together. On the other hand, aliens might be a single, unified intelligence. Many scientists have puzzled over how ants seem to operate under collective intelligence.

Is there other life in the universe that is smart?

It’s a question that’s been talked about for hundreds, if not thousands, of years. But we’ve only recently had a real chance to find out. Projects like SETI (Search for Extraterrestrial Intelligence), which uses radio telescopes to actively listen for radio messages from alien civilizations, have given us this chance.

Our radio telescopes are unlikely to find any signs of life on planets where aliens are not using technology to communicate. It is reasonable to think that our first contact with aliens will be with aliens at a very similar or far more advanced stage of technology than our own.

What do you think we’ll find if SETI searches work?

Rees reminds us that human technology only goes back a few thousand years. Rees speculates that it may only be another century or two when inorganic intelligence, like AI, takes over or surpasses humans.

The power of computers to process data is already growing exponentially, which means that AI may be able to use a lot more data in the future than it can today. It seems likely that it could then get smarter and smarter until it was more intelligent than humans in general. An example of how powerful computers already are can be best illustrated by the supercomputer and AI that Facebook is developing for the Metaverse.

If SETI were successful, it would be hard to record messages that humans could interpret. Instead, SETI might find a byproduct or problem with a machine that is too complicated for us to understand.

Rees gets us to consider all the strange reasons (ideological, financial, and religious) that people have done things in the past. Even if humans did receive a radio message that we could figure out, how would we know the purpose behind what the super-smart sender wanted to say? We have no idea at all.

SETI looks at the part of the electromagnetic spectrum that deals with radio waves. Rees challenges astronomers to look into both the optical and X-ray parts of the spectrum. We shouldn’t just listen for radio transmissions; we should also be looking for other signs of things or activities that aren’t natural.

Dyson spheres may prove the existence of aliens

Rees thinks we should search the universe for things like Dyson spheres, artificial structures built around stars to absorb their energy, and chlorofluorocarbons, carbon, chlorine, and fluorine-based chemicals in the atmospheres of planets. These chemicals are greenhouse gases that can’t be made by natural processes. This means Dyson spheres could signify “terraforming” (changing a planet to make it more habitable) or industrial pollution.

We are looking for big alien spaceships, but alien AI might be nano size

Rees thinks we can probably rule out visits from species that look like humans, but there are other possibilities. For example, an alien civilization that had mastered nanotechnology might have put its intelligence into tiny machines. With swarms of tiny probes, it could attack other planets or even asteroid belts. Humans are already developing insect-like robots that can be used in swarms for search and rescue and pollination missions.

Are we / aliens made of things?

People can already model some very complicated things, like the weather. Smarter societies, on the other hand, might be able to simulate living things with real minds or even whole worlds or universes. Could we already be in some kind of alien virtual reality?

Are we just players in a computer game simulation made by aliens?

Rees gets us to consider that we might actually be living in a scenario similar to the Matrix film.

How do we know that we are not living in a simulation made by extraterrestrial intelligence with better technology than us? Maybe we’re nothing more than a bit of fun for the supreme being in charge of this model.

Rees hypothesizes that if life is destined to be able to make technologically advanced civilizations that can make computer programs, there may be more simulated universes than real ones, so we may be in one of them?

This idea may sound crazy, but it is based on what we know about physics and cosmology right now. But we should be sure to keep an open mind about the fact that there may be a lot we don’t understand. Maybe the laws and constants we see and measure are “local” and different in other parts of the universe? That would open up even more mind-blowing options.

Does no communication mean no extraterrestrial intelligence, or is it just their choice to ignore us?

To conclude, Rees gets us to consider that physical reality could be so complicated that neither our minds nor our senses can fully understand it. Some electronic “brains” may just see the world in a very different way. We can’t guess what they’ll do or figure out why. So, we can’t tell if the radio silence SETI is currently experiencing means there is no advanced alien intelligence or if it’s just their choice.