Is this the future of off-the-grid living? 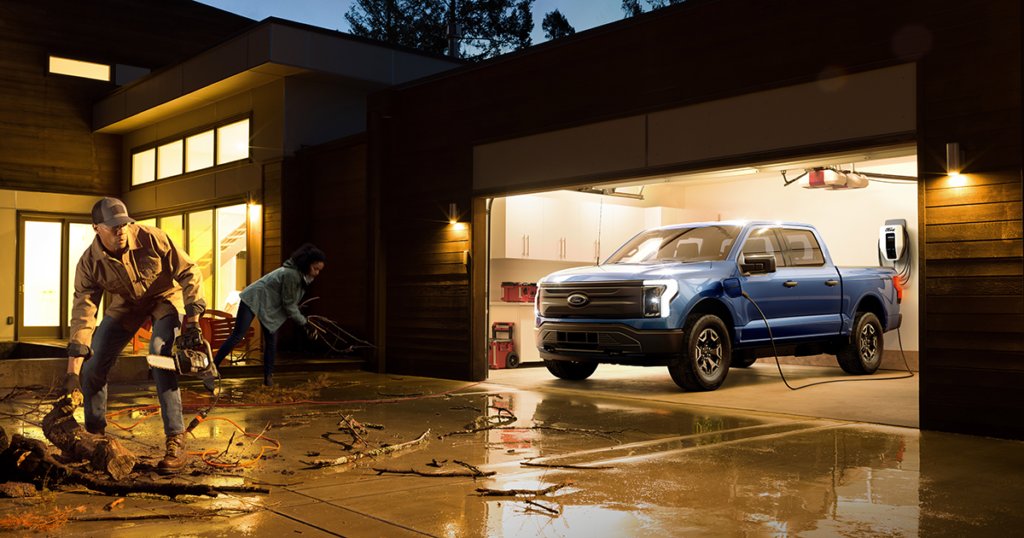 Electric vehicles will increasingly be part of providing backup energy for homes during grid blackouts.

Ford have made an electric car called the F-150 Lightning which ‘would be capable of serving as a backup power source.

Ford now reveals that the car’s 131-kWh battery will be able to power the average US home for up to 3 days.

The great thing about the Ford Charge Station Pro and Home Integration System is that ‘the F-150 will automatically take over powering the home if grid power goes down. Using its bidirectional charging capabilities, Ford’s system will send up to 9.6 kilowatts of power into the home. When the grid goes back online, the system automatically switches the home back to electrical grid power.’

Ford further claims ‘that the Lightning battery can power a home for up to 10 days when combined with solar charging and power rationing strategies.’

A great backup power solution to have in a crisis

The world needs more solutions like the Ford F-150 Lightning to adapt to the reality of a changing climate. The UN Secretary-General Antonio Guterres, referring to the increase of extreme weather conditions, has warned that the world is “changing before our eyes” due to climate change.

Alternative electricity sources for the home will become increasingly important to people who live in states that experience extreme weather conditions. February 10–11, 2021 ‘the state of Texas suffered a major power crisis, which came about as a result of three severe winter storms sweeping across the United States on February 10–11.’

The crisis in Texas, which cost more than $195 billion left ‘More than 4.5 million homes and businesses were left without power, some for several days. At least 246 people were killed directly or indirectly, with some estimates as high as 702 killed as a result of the crisis.’

Not only do crises such as the one in Texas leave people in life and death situations, but power companies in the Texas crisis were also quick to pass on the wholesale prices as high as $9,000/MWh on the consumer, where typically cost was $50/MWh.

There are perhaps some unanswered questions consumers will need to examine further before they buy an electric vehicle as a backup power source.

In a crisis such as the Texas big freeze, people will face the choice of either having to use the power from their vehicle to keep their home warm for a few days (when they don’t know how long the crisis will last) or save the power in their vehicle battery for emergency travel.

Also, another problem for consumers during the Texas power crisis, for some people, wasn’t that the grid stopped supplying their homes with power, but rather the power that the grid did provide came at a considerable cost.

Users will have to ask, are the bidirectional energy systems smart enough to opt-out of the grid supply when the price goes up?

For now, the Ford F-150 Lightning offers an innovative approach to handling a minor power outage.