The meteoric rise of computer technology created Google and Apple. Which company is bigger and better. This is the ultimate showdown: Google vs Apple 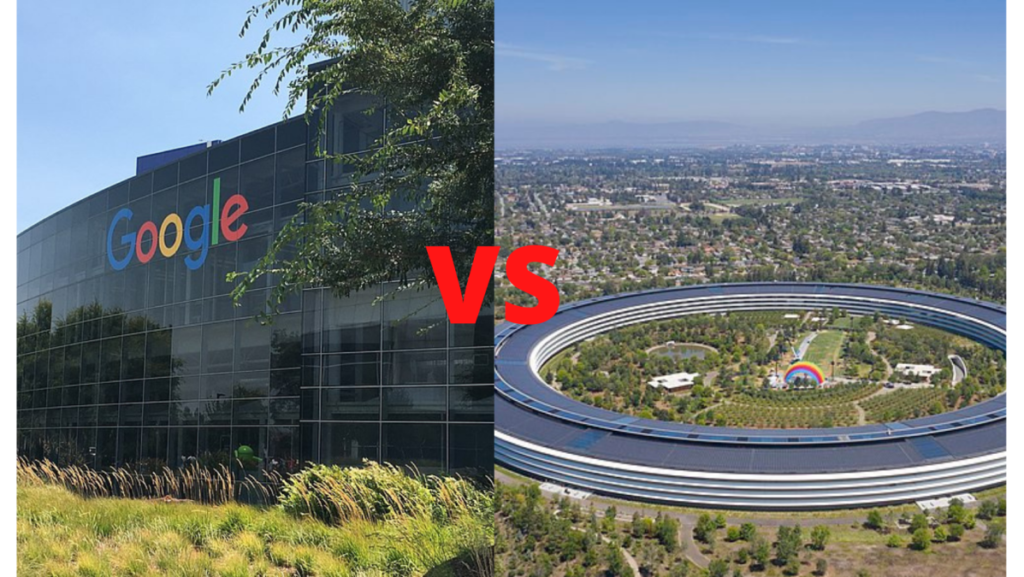 Technology Battle: Google VS Apple – How Do They Compare?

The meteoric rise of computer technology might not trouble the average millennial, but for those of you who remember the days before we were all hyper-connected, our reliance on modern technology might seem somewhat problematic at times. Where will we be in another 50 years?

Iconoclastic entrepreneur Elon Musk has said if we don’t get a handle on artificial intelligence, we may create something we’ll sorely regret. Perhaps the most frightening depiction of tech dystopia is in the television series Black Mirror, which exposes a world lacking in empathy, where what once were dreams have turned into living nightmares. Even now the media argues over automation.

Will it mean a laid back life for the masses, or mass unemployment under a technocracy? Innovation is unstoppable, and there are a handful of tech companies at the forefront of this innovation. We’ll look at two of them today. Google vs Apple

The story of Apple

If you’ve seen our other shows on Apple, you’ll already know something about the company. It was started by Steve Jobs and Steve Wozniak in 1976, with both men pushing to create the ideal personal computer. Jobs was forced out of Apple after what has been called a “failed boardroom coup.”

The company, however, lacked a great leader and Jobs was brought back to eventually become CEO. It was shortly after this that Apple grew into the innovative tech giant it is today. Jobs’s vision of the ideal personal computer became manifested when he introduced the first iMac in 1998. The world was equally impressed when Apple came out with the easy to use and beautifully made iPod three years later.

Two years after that came the iTunes Music Store, but what really shook things up was the release of Apple’s flagship product, the iPhone. That was in 2007. The iPad came in 2010, and since these products came onto the market, Apple has arguably ruled the roost of consumer gadgets. As for Steve Jobs, he’s now treated like a technology demigod.

The Founding of Google

But, where would we be without Google, the company behind the search engine that most folks can’t live without? Google co-founders Larry Page and Sergey Brin met at Stanford University in 1995. It’s said the two did not agree on many matters, but one thing they did agree on was the creation of a search engine that ranked pages by their importance on the World Wide Web.

This search engine was actually first called BackRub, but then fortunately for the pair they saw the light and made the change to Google. Google Incorporated was born in 1998, and soon venture capitalists were poised to invest in this small outfit. Google just kept growing and soon billions of searches would be made every day on its search engine.

The company created its headquarters the “Googleplex”, which would soon become synonymous with the avant-garde kind of tech workplace we see all over today. The company has since ventured into all kinds of markets, including the smartphone business, renewable energy, self-driving cars, enterprise services, artificial intelligence and machine learning, and all manner of smart devices. The google vs apple debate just got interesting.

If we can get through life without becoming part of Apple’s sometimes criticized ecosystem, it would be difficult to not be a consumer of a Google product. Because Google has its fingers in so many pies, it created a parent company that goes by the name Alphabet Inc. This is what we call a conglomerate. So which is the bigger firm; google vs apple?

Just how big are The two Tech Giants: Google Vs Apple?

Now let’s get straight to money matters when debating google vs apple. As we said before, some critics have said these companies are too big for our own good. If we take a look at the most recent Forbes ‘World’s Biggest Companies List’, Apple is in ninth place. That is the highest ranked tech company on the list, and for some time now the media has been telling us Apple will become the world’s first company to be worth a staggering one trillion dollars.

But 2017 has passed now, and so we must wait until Forbes creates its new list. As Fortune writes in 2017, while Apple generates bigger profits, it is only slightly ahead of Google in regards to which company will become the world’s first company with a valuation of over one trillion dollars.

Fortune puts Amazon as the third company in the running, with Microsoft also a contender and Facebook not far behind. Tesla, it says, is a “dark horse”, but CEO Elon Musk seems to think his company is on a similar trajectory to one of SpaceX’s rockets.

Where would you rather work?

Back to Google vs Apple. It’s thought that Apple has around 123,000 employees, but to the chagrin of President Donald Trump, Apple outsources much of its manufacturing to countries such as China and Taiwan. Apple’s biggest partner in the assembling business is Foxconn, and it has factories in a number of countries around the world. Google has 73,992 employees as of 2017.

It outsources such things as IT functions to India, while it’s also been building its servers in Asia. Where is a better place to work? Well, that’s not easy to say. According to one engineer that has worked at both companies, Google is better if you want to solve big technological problems, as Apple is more concerned with design and Google with technology. If you are a female engineer where would be better? Google is currently being sued for pay discrimination based on gender, whereas Apple has been shouting from the rooftops that it has solved the gender pay gap.

When it comes to controversy both these world leaders have been tainted more than a few times. Apple has come under the gun for human rights abuses in its assembly factories in China, and we all remember the news about those suicide nets at its assembly plants. But more recently Apple has been skewered in the press for its offshore business in Ireland, and late last year the billions it has saved from offshoring in the tax haven of the Channel Island of Jersey.

CEO Tim Cook fired back stating that Apple was the USA’s biggest tax payer. Alas, Google is no stranger to tax avoidance, so much so that in the UK a Google Tax has been mulled over to get something back from companies that funnel their profits through low-tax countries. It seems there is no angel in this department.

Apple vs Googe:Which is the more successful ?

What about their products, (google vs apple) which company could you just not live without? While it may be some time before we are being driven around in one of Google’s autonomous vehicles, and even though we enjoyed our 30-minute dalliance with its machine learning doodle bot, Google has a few things that we might take for granted.

But then we have those innovative and sleek Apple products, and also the Apple operating system, iOS, that Apple aficionados will tell you they cannot live without. “I’d never go back,” you hear many an Apple user saying.

Bottom line on Google vs Apple

The question is, which company has really done the most for mankind, and looking into the future, who will be at the forefront of tech innovation? Both companies are making hay in the augmented and virtual reality space, and both are very serious about artificial intelligence. So, who will be on top in 10 years’ time? Let us know your thoughts in the comments!