A new study has revealed that just two predators with a taste for shark liver are enough to force the great white sharks to abandon their entire habitat. 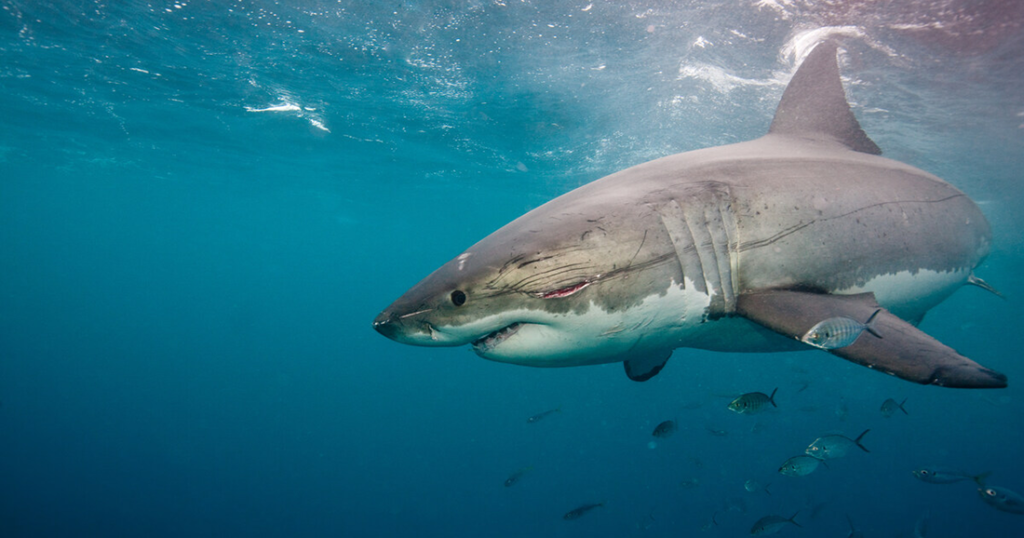 No other marine animal’s name inspires greater dread, whether that dread is well-founded or not – than the great white shark. The great white (Carcharodon carcharias) is recognized as one of the top predators in the ocean due to its sleek body designed for hunting, sharp teeth, and perhaps unjustified reputation for enjoying human flesh. While this is true, the great white shark also has what appears to be anxieties.

Researchers have documented that the white sharks have become incredibly scarce off the South African coast since 2017, where they usually assemble. The mysterious absence was previously attributed to human activities, including overfishing.

New research has now established the true culprit: a pair of orcas (Orcinus orca), which hunt the sharks and eat what are for orcas extremely delectable, nutritious, vitamin-rich livers.

The fishing town of Gasbag on the South African coast was previously like a Mecca for shark-spotters. It was heavily populated by predators, even the nearby Dyer Island is regarded as the great white shark capital of the world. However, the sharks’ presence has dwindled over the past few years. Eight great white sharks have washed up at Gasbag sea shore since 2017. Seven are without livers and some without hearts—a telltale sign of an orca attack.

These sharks’ characteristic wounds can be linked to the same pair of orcas. Scientists believe these two orcas are probably responsible for many more great white deaths that haven’t washed ashore. Other studies have shown that the presence of orcas can effectively drive great white sharks away. One study from 2020 discovered that if an orca shows up in the area, great whites will flee away from their regular hunting grounds off the coast of San Francisco.

A group of researchers led by marine biologist Alison Towner of the Dyer Island Conservation Trust demonstrated in a new study that orcas are the reason sharks are beginning to avoid what were once some of their favorite spots. The researchers used long-term sighting and tracking data from tagged sharks.

“Single great white sharks did not appear for weeks or months following an orca attack in Gasbag,” Towner said.

“However, what we appear to be seeing is a broad avoidance (rather than a fine-scale) strategy, comparable to what wild dogs in Tanzania’s Serengeti use in response to an increase in lion activity. “The more the orcas visit these locations, the longer the great white sharks stay away.”

The scientists tracked 14 GPS-tagged sharks over five years as they retreated from the region when orcas were around. Great white shark sightings have decreased dramatically in several bays as well.

This is a major event

Since records have been kept, there have only been two instances of great white sharks missing from Gasbag for a week or longer: one in 2007 and one in 2017. The researchers claimed that the recent absences were unprecedented. Additionally, they are changing the ecology.

The ecological niche left by the loss of great white sharks is being filled by copper sharks (Carcharhinus brachyurus). Great white sharks normally prey on these sharks, but when great whites are not there, orcas hunt copper sharks. Notably, the researchers noted that they are doing so with the expertise of predators having previous experience in taking down big sharks.

“In marine environments, for instance, where balance is crucial, the lack of great white sharks may allow Cape fur seals to prey on the critically endangered African penguins or to compete with them for the small pelagic fish they eat. This is a top-down effect; nevertheless, the significant removal of abalone, which grazes the kelp forests these species are all connected through, has also caused “bottom-up” trophic stresses,” Towner said.

Simply put, there is a limit to how much stress an ecosystem can withstand, and the effects of orcas killing sharks are probably much more widespread.

It’s essential to consider the potential motivations behind orcas’ shark killing. Shark’s livers are rich sources of nutrition, huge, plump, and full of fats and oil the sharks need to fuel their epic wandering journeys across the ocean. However, it’s unclear how the orcas came to this conclusion or why they might choose shark livers as a food source.

Scientists suggest that certain orcas may be adjusting to preferentially killing sharks in a paper that hasn’t yet been published, presumably in response to a decline in the population of their favored prey. However, the added strain from a powerful predator is worrisome, given that great white populations are declining globally.

Due to their sluggish development and late-maturing life-history strategy, sub-adult great white sharks can further threaten an already fragile shark population, according to Towner.

“To learn more about how these predators might harm the long-term biological balance in these intricate coastal seascapes, more monitoring studies and increased vigilance using citizen science (such as fishers’ reports, tourism vessels) will help, according to Towner.

The results of the team’s research were released in the African Journal of Marine Science.