Oort cloud, the cosmographic boundary of our Solar System consists of trillions of comets. 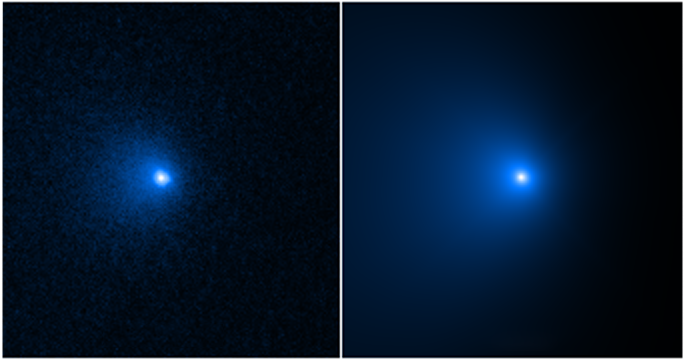 Far beyond Pluto and the edges of the Kuiper Belt at the outermost reaches of our solar system is the Oort Cloud.  It represents the cosmographic boundary of our Solar System. It is believed that the Oort Cloud is a massive sphere of icy objects and comets that surround the Sun, planets, and the Kuiper Belt.  It was a Dutch astronomer Jan Oort in 1950, who first believed in the existence of the Oort Cloud.  It is still a theory because too faint and distant for the innumerable comets which are believed to be in it to be observed.

Astronomers using the Hubble Telescope believe that they have witnessed 2 billion miles away, the largest comet ever observed.  They have called it C/2014 UN271.  They believe C/2014 UN271 originates from the Oort Cloud. Astronomers believe that the Oort cloud is host to trillions of comets which could be like C/2014 UN271 or even bigger. Professor of planetary science and astronomy David Jewitt at the University of California, Los Angeles (UCLA), thinks this is the tip of the iceberg as thousands of others are too faint to see.

The biggest comet ever recorded

Using measurement calculations from Hubble that observes the comet’s reflectivity, scientists think the size of the icy comet’s nucleus is approximately 80 to 85 miles across. It is kind of hard-to-get accurate measurements when an object is estimated to be 2 billion miles away and traveling at 22,000 miles an hour.

If observers are correct, this would make the nucleus of this comet about fifty times bigger than the nucleus sizes of other known comets.  Scientists calculate its mass to be 500 trillion tons. That is a hundred thousand times greater than the mass of comets that have been recorded close to our Sun.

Unlike asteroids which are made up of rocky materials and metal, comets are made up of ice, dust, and rocky material. Just because comets are essentially lumps of ice containing dust and rocks doesn’t mean they can’t do damage.  David Morrison, quoted by the scientificamerican.com, warns that if a comet is 10 kilometers (6.2 miles) or larger, the impact energy would be more than 100 million megatons, creating damage so extensive it would lead to mass extinction of most forms of life.

Scientists already know this from the Chicxulub crater and Vredefort crater, which caused mass extinctions on Earth in the time of the dinosaurs from asteroids calculated to be 7.5 miles wide.

It is kind of a shocker for space scientists to see a comet which they estimate to be between 80 and 85 miles across, traveling through space, fifty times the size of typical comets coming from a place where trillions of comets are believed to be.

The biggest crater ever made on Earth by an asteroid is the Vredefort crater, which has a diameter of 180 miles, caused by an asteroid estimated to be between 6.2 and 9.3 miles.  There have been much more bigger collisions in space, such as the comets or asteroids that collided with the Moon causing the PKA basin to 1,550 miles in diameter, covering almost a quarter of the Moon’s surface, and the one that collided with Mars, causing the Hellas Planitia crater 1,400 miles in diameter.

Comets the size of C/2014 UN271 traveling around our solar system, even though billions of miles away, are a truly terrifying prospect that NASA’s planetary defense programs prepare for.

We don’t need to worry about C/2014 UN271. The best time to see it will be in the year 2031 when it will be closest to our Sun; even then scientists don’t think it will be closer than 1 billion miles away from the Sun.

The Lincoln Near-Earth Asteroid Research (LINEAR) project is a collaboration of NASA, Massachusetts Institute of Technology’s Lincoln Laboratory, and the United States Air Force, which looks out for near-Earth asteroids.