A fight between two movie characters, John Wick, the most deadly assassin with emotional issues, and Neo, the kung-fu fighting master of the Matrix, played by Keanu Reeves. 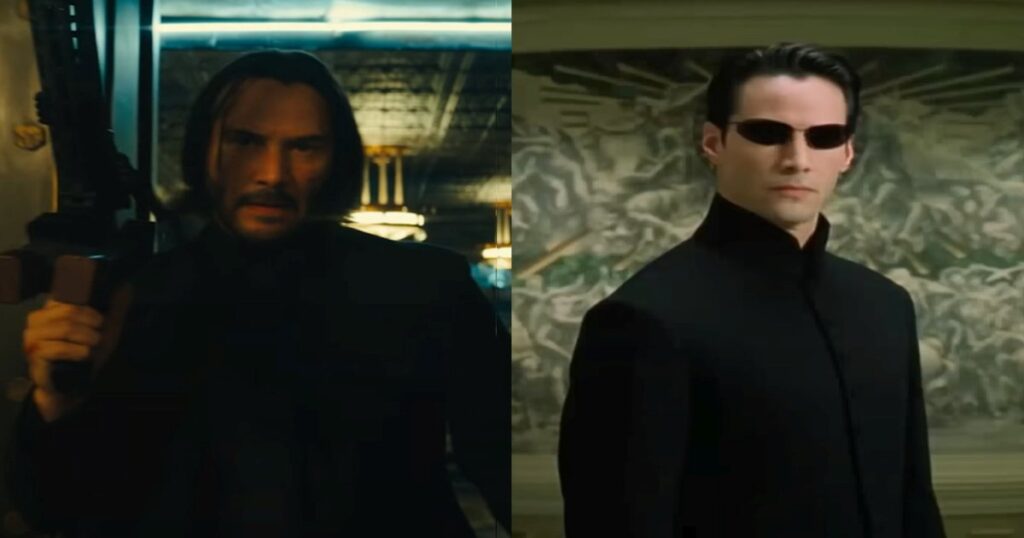 It’s the ultimate Keanu showdown, Neo vs John Wick movie characters. Young Keanu vs Old Keanu. But rest assured, one of these two- Neo or John Wick- movie characters is going to be a Sad Keanu by the time this fight is over.

Now, let us run down our two movie characters, and see what the tale of the tape tells us.

Neo, from The Matrix

Neo, or The One, or simply Thomas A. Anderson to his landlord, was a programmer working for a run-of-the-mill software company. By night however he was a prolific hacker who infiltrated company and government networks in order to sell off the secrets stashed there.

One day he came across something known as ‘The Matrix’, but Neo was unable to find any definite answer on what this was. He believed that whatever this matrix was, it was tied to his own feeling that there was something wrong with the world.

In a quest for answers, Neo undertook a search for one of the world’s most dangerous terrorists, a man known simply as ‘Morpheus’. His search leads him to make contact with Trinity, or Carrie-Anne Moss with a leather fetish, and this encounter inevitably leads him to Morpheus and his discovery that all reality is nothing but a digital construct created by intelligent machines.

The purpose of ‘The Matrix’ was to give human minds something to occupy themselves with while machines harvested the bio-electrical energy of their physical bodies, which makes absolutely zero sense but that’s ok because we got to see some cool gunfights.

Soon Neo is embracing his newfound identity as a freedom fighter- even if this is a fight to free people from normal life in pleasant modern-day Earth and awaken them to a post-apocalyptic hellscape where machines are constantly trying to rip them to pieces. Oh, and everybody eats goo soup- which we’re pretty sure is dead people by the way because did you see a single farm outside of The Matrix in any of the movies? Yeah, we didn’t think so.

So Neo literally becomes a god in between the first and second movies and at that point, the Wachowskis realize that you can’t have a protagonist become godlike at the start of a trilogy because then nothing is a challenge to him, and the entire Matrix series pretty much goes off the rails at that point. What’s important to us though is Neo’s powers, as that will be what John Wick will be contending with.

Has incredible abilities, some we don’t even know of

First, inside The Matrix Neo is practically God. With his ability to edit the very source code of the matrix, Neo can twist and spin reality as he wishes, dodging bullets, explosions, and destroying hostile AIs with but a touch. He can fly, we’re pretty sure he can teleport, and he has the strength of a hundred men. Or a thousand. Or a million- there’s literally no limit to his power because the matrix is his sandbox.

On top of godlike physical and mental abilities within the matrix, Neo is also an extremely skilled martial artist, given the fact that he can learn any martial art by simply downloading it directly into his brain. This means that Neo has mastered every fighting style that has ever been digitally recorded, which is pretty much all of them.

Knows his way around guns

He’s also an expert on every weapon ever conceived by man- as long as someone made a WikiHow on using it, of course. He knows every language posted on the internet, every single science, and all memes ever created, because he can just instantly download the information to his brain.

This makes Neo a dangerous opponent even outside of The Matrix, because while he can’t bend reality to his will outside the matrix, he still knows literally everything ever. There’s a popular myth that it takes 10,000 hours to become an expert at something- for Neo it takes a fraction of a second, and unlike your ability to ‘totally pwn 360 no scope’ noobs on call of duty, Neo’s knowledge actually has useful applications in the real world. So if John Wick thought this fight would be easier outside the matrix, think again.

John’s reputation quickly grew as he took on more and more dangerous assignments, earning the nickname of “The Boogeyman”. John would eventually join up with a Russian outfit known as the Tarasov Mob, becoming its leader’s top hitter. John worked for many years until one day he met a girl named Helen and fell in love with her.

Wishing to live a quiet, civilian life, John Wick asked his boss to release him from his service. A deal was struck- John would have to accomplish one impossible task and then be free to live his life as he wished: write just one good episode of The Mandalorian- err, we mean, kill all of Viggo Tarasov’s rivals in just one night.

With a little help from his friends, John managed to accomplish the feat and soon he was living the simple life with his beloved Helen, until tragically cancer claimed her life. Helen left John with a farewell gift though, a small beagle named Daisy. When Viggo Tarasov’s son ends up killing Daisy, John went super-sayian and killed literally everybody ever.

He is expert in basically everything

John is much like Neo, a martial arts expert, skilled in Barizilian jiu-jitsu, judo, jujutsu, sombo, aikido, and aiki-jitsu. He’s also very skilled with blades and knows his way around practically any firearm in the world, making him a deadly opponent.

So, how would the fight between these two movie characters go?

For our first round we’re taking things to the matrix, where obviously Neo is going to have all the advantages. Neo can simply dodge Wick’s attacks all day long if he wanted, but why not torment Wick and defeat him not just physically but psychologically.

Much like one of the first mods to hit Steam for XCOM 2, Neo can simply mod the matrix so that his own gun shoots beagle puppies at John Wick instead of bullets. A beagle moving at several hundred feet per second is still a deadly weapon, and one that will for sure make John Wick absolutely lose his (bleep).

Sadly, there’s literally nothing Wick can do in the matrix against Neo.

Well, you might want to pump your brakes before you think a real world fight between Neo and Wick would end with a Wick victory. Remember how earlier we made it clear that Neo basically has the sum knowledge of humanity in his brain thanks to his ability to download everything? Well, Wick may be a martial arts and gun expert, but Neo’s own proficiency is lightyears ahead of Wick’s.

Sure, Wick has real world experience- but Neo has something even better: simulated experience. While jacked into the matrix, or a training digital construct, Neo can gain a form of super intelligence known as speed intelligence.

This means that Neo is basically able to framejack his mind so that he experiences time in any digital world at hundreds or even thousands of times faster than time flows in the real world.

So while John Wick has been a top assassin for thirty years or so, Neo could have been practicing for this fight for tens of thousands of years, simply by jacking into a training program and framejacking his brain.

Experience is also on Neo’s side

Experience is firmly on Neo’s side, because John Wick will have lived only one lifetime as a super assassin, while Neo will have lived thousands of lifetimes in his digital training world, which is capable of fully simulating every single aspect of real life. Such accurate and detailed simulations mean that Neo’s fake, virtual experience is just as effective as Wick’s real-world experience.

Physically John Wick would have a slight chance

Wick’s one advantage over Neo is his physical fitness though, as Neo doesn’t have to be as physically fit as Wick when most of his fighting is in the matrix. You might think Wick’s reflexes are better than Neo’s, because of his real-world experience, but reflexes are based on electric impulses, which can be fully replicated by a computer in a simulation- so both Wick and Neo are on par here.

Physically, Wick is stronger than Neo without a doubt- but that matters little if Neo can resolve a fight at a distance using his tens of thousands of simulated years of gunfight experience to destroy Wick.

To make matters worse, Neo also has the ability to affect the electronic systems of machines in the real world through some poorly understood method, or just bad plot writing, so Neo could use that power to destroy or interfere with any electronics Wick may be using.

If the fight came down to hand-to-hand combat, Wick may have a shot at victory thanks to his superior physical strength and stamina. However, Neo has mastered every martial art that was ever digitally recorded, and many of these martial arts are designed for weaker opponents to defend themselves from physically stronger opponents.

Once more, given his thousands of years of experience in simulated martial arts fights, even Wick’s superior strength may not be enough to overcome Neo’s god-like skill set.

Which of the two movie characters would win the fight?

In the end, we’re declaring Neo a winner, because when your brain is literally a supercomputer, it’s like playing at life with cheat codes enabled. But, Neo and Wick movie characters have one opponent that neither can defeat- and that’s Keanu Reeves.

Keanu Reeves, the man who would beat both of them

Not only are both Neo and Wick movie characters constructs in Keanu’s head, mere fictions in his imagination, and a person who played both movie characters. Keanu is basically the best at everything IRL. Seriously, he’s the nicest guy in Hollywood by far, the most respectful, and he learned every single martial art and gun skill that he really needed to know for both Neo and John Wick movie characters. Keanu has been an undercover Chuck Norris this whole time, because the true master always keeps his strength secret.