Revolutionary Laser Propulsion Could Take Humans to Mars in 45 Days 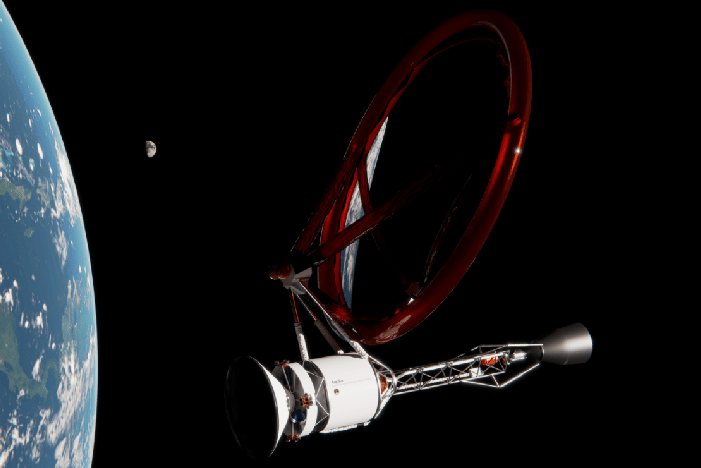 Laser-thermal propulsion could be the key to Mars exploration

One of the challenges of travelling to Mars, is that ‘missions can only launch for Mars every 26 months when our two planets are at the closest points in their orbit to each other’.

The Perseverance Rover was launched from Cape Canaveral Air Force Station on July 30, 2020, it landed on Mars on February 18, 2021

There are now emerging technologies that could have got the Perseverance Rover to Mars much quicker in 100 days or less, such as nuclear-thermal propulsion or laser propulsion.

Is nuclear power the way forward?

Iain Boyd Professor of Aerospace Engineering Sciences at University of Colorado Boulder is an advocate of nuclear-thermal propulsion.

Writing for theconversation.com Boyd acknowledges Chemical propulsion systems provide a lot of thrust, but says chemical rockets aren’t particularly efficient. This is because rocket fuel isn’t that energy-dense. The Moon mission which used the Saturn V rocket carrying 950,000 gallons of fuel. produced 35 million Newtons of force at liftoff. Most of the fuel was used getting the Saturn V rocket into orbit. The limitations of chemical propulsion is apparent, a lot of heavy fuel is required to get anywhere.

New laws were introduced in 2019 to regulate the use of nuclear technologies in space flights.  The ability to use nuclear systems safely and sustainably is the challenge that the new laws try and address.  Under the new laws NASA was obligated to ‘create an Interagency Nuclear Safety Review Board (INSRB) consisting of representatives from the departments of State, Defense, Energy and Transportation, as well as the Environmental Protection Agency, NASA and the Nuclear Regulatory Commission.’

Also, another disadvantage of using nuclear technology is the potential prolonged exposure to radiation.

Could laser technology be the way forward?

Chemical propulsion is heavy and fuel intensive and slow compared to nuclear propulsion.

Nuclear propulsion is heavily regulated and carries with it the risk of prolonged exposure to radiation and radiation hazards.

Also any technology where parts run out of fuel just increases space junk. There is increasing challenges on rocket scientists to not only reach other parts of the universe quicker, but to do it more sustainably.

Now there is a new study called ‘Design of a rapid transit to Mars mission using laser-thermal propulsion’ by a team of researchers from Montreal’s McGill University  into a novel propulsion system, which proposes lasers could be used to heat hydrogen fuel, and this could reduce transit times to Mars to just 45 days.

This new technology if its research claims are true could mean that spacecraft could reach Mars 4.51 times faster than current technology.  Compared to using Nuclear Technology, the most immediate benefit is that it offers a solution to reduce ‘prolonged exposure to radiation and microgravity’.

These researcher’s study isn’t the only study that proposes it can reduce the current time of it takes to travel in space.

Since 2009 NASA has funded research into programs that create solutions for directed-energy (DE) propulsion, with the ‘aim to adapt large-scale DE applications for interstellar missions’.

Other scientists studying laser propulsion are considering whether it is possible to accelerate a lightsail, enabling the spacecraft to travel at a fraction of the speed of light. The projects researching these methods include Breakthrough Starshot and Project Dragonfly.

Other scientists think that power beaming is the way forward, the design of the technologies that provide wireless power transmission between planets.

Many of these space travel enhancing technologies which are at a theoretical stage, would have broader applications to defence and communication technologies.  If successfully implemented would hopefully mean less rockets would run out of fuel in space, meaning less space junk, that’s got to be a good thing.