There is a possibility that life on Earth was seeded from outside our solar system. 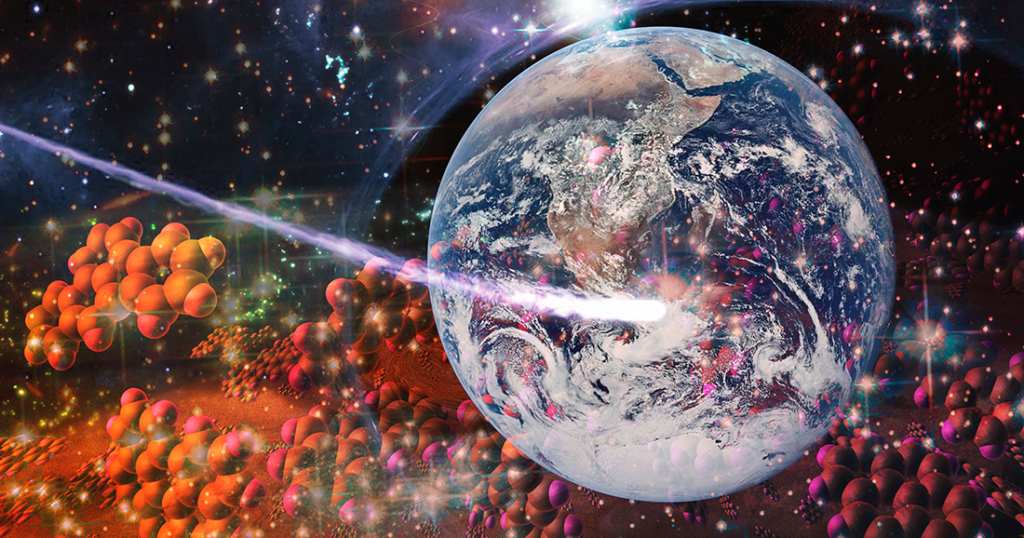 Many things confuse scientists about outer space; there is a little understood time that they call the cosmic dawn just after the Big Bang.

Why has life come to exist on Earth when it is not apparent that life is in abundance anywhere else?

Conveniently scientists refer to the Big Bang and try and work everything else out from there. From the Big Bang emanated black holes and mysterious dark matter, black holes powered quasars, quasars turned into galaxies where solar systems and planets form. Some planets like Earth have developed at a more habitable distance from the sun and were able to support life.

It is a fantastic fact that humans can exist at all in this world after everything results from a cosmic explosion. One can only imagine that before this time, that matter was just like a mess of unformed things, a cosmic soup that contained every ingredient for something that later became life or inanimate. Why does Earth seem to have so much life, and the rest of space appears to be inanimate?

Everything that makes a human being results from a sequence of genetic code that consists of what scientists call four genome letters, nucleobases that contain the blueprint for proteins A, T, G, and C. In people, the sequence of those letters makes us different from, say, a rock or a vegetable. The four letters arranged in a unique series of over 3 billion characters make us human. Scientists have gone to incredible lengths to map how the letters in people’s DNA.

The letters stand for:

The letters of the genome are the building blocks of life on Earth. The absence of any one of these letters on our planet would have meant that there would not have been the ingredients necessary to form human DNA. The letters in DNA are in everything that we see on our planet, both live and inanimate.

When scientists search outer space for evidence of all the DNA that forms the building blocks of life on Earth, they have been searching meteorites for Nucleobases. There are two types of Nucleobases, purines and pyrimidines.

Until recently, scientists had failed to find pyrimidines in meteorites.

When scientists could only find purines in outer space and meteorites on Earth, they could only find two of the building blocks of life, A and G, contained in purines, but not T and C or U.

Scientists had until recently been puzzled why, when examining meteorites, they couldn’t find all the letters needed for key DNA building blocks. After all, someone might expect all the ingredients from the same cosmic Big Bang to be present in most parts of space.

Scientists had one theory why meteorites didn’t have pyrimidines because purines include a pentagonal ring known as imidazole. Imidazole acts as a catalyst setting off chemical reactions that could form purines instead of pyrimidines.

The issue of not finding pyrimidines in meteorites has now been put to rest by the Japanese space agency (JAXA), which had collaborated with NASA to look specifically at asteroids formed in the early solar system when Earth was just starting to form.

These space agencies now confirm that they have found pyrimidines in space rock samples that they are returning from C-type asteroid Ryugu and B-type Bennu. Their study of these asteroids has allowed them to analyze uncontaminated extraterrestrial materials leading to this discovery.

JAXA and NASA chose C- and B-type asteroids for sample return missions because these carbon-rich asteroids are potential parent bodies of carbonaceous chondrites.

A chondrite is a rocky meteorite that has not changed by melting or differentiation of the parent body. Chondrite asteroids were formed as primitive asteroids in the early solar system by small grains of various types of dust.

Better technology reveals what was always there

Scientist Yasuhiro Oba has said that this discovery of pyrimidines in meteorites was possible using state-of-the-art analytical techniques initially designed for genetic and pharmaceutical research to detect tiny amounts of nucleobases. These techniques are 10 to 100 times more sensitive than prior methods.

The discovery of pyrimidines in space rocks is causing some scientists to consider the possibility that the letters to form life on our planet were delivered by meteorites impacts with ancient Earth.