5 Interesting Facts of Life In Smallest Country In The World

What it's like to live in the smallest country in the world? 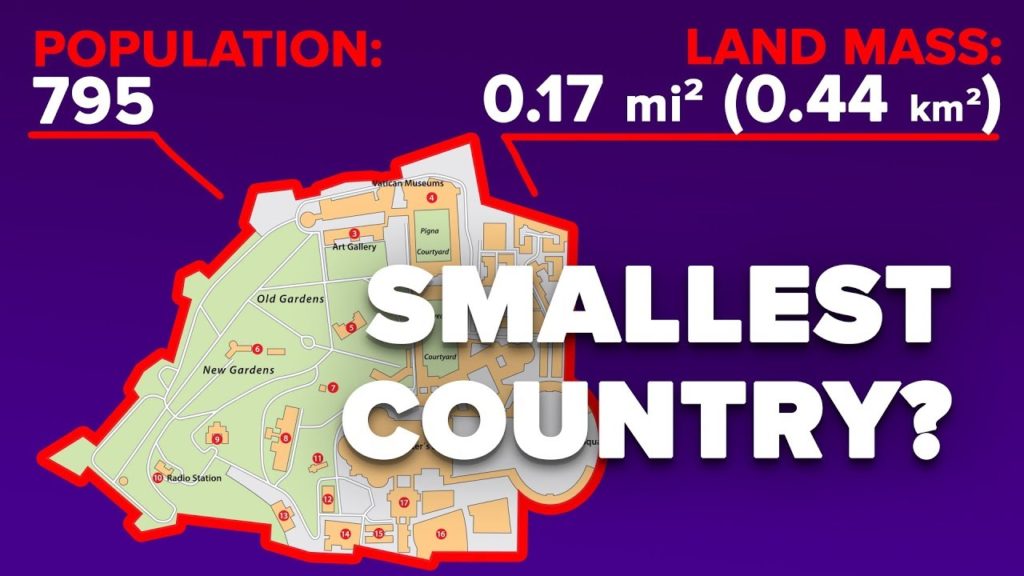 In terms of population, China comes top, followed by India, the United States, Indonesia, and Brazil. India is expected to take the number one spot from China by 2022 according to the UN, while Nigeria is set to catch up to the USA or even exceed it in terms of population by 2050.

A UN report tells us Nigeria is the fastest growing population worldwide, and one of the reasons the world’s population will be 8.6 billion by 2030; 9.8 billion by 2050, and 11.2 billion by 2100. But today it’s all about the little guys, in this Article of  The Infographics Show, Smallest country in the world.

We’ll start with the smallest by landmass, and that is Vatican City. Sharing a 2-mile (3.2km) border with Italy, it is a country located within the city of Rome. It has a landmass of 0.44 km2 (0.17 sq. miles), or measures about 109 acres. Worldometers puts the live population of this country at 795. In order to put this into perspective, Vatican City is about one-eighth the size of New York’s Central Park. You can literally run around the entire country in about 30 minutes, though the lack of sidewalks will make it not so much fun.

How did this little place become a Country?

The area is home to historic sites such as St. Peter’s Basilica and the Sistine Chapel, and so it was designated the headquarters of the Catholic Church. It became a nation after the signing of the Lateran Pacts in 1929. But why bother making this small area an independent state? It’s a very long story, but the gist of it is that the Papal States which covered much of modern-day Italy was coveted by the then neighboring  Kingdom of Italy.

So, the Italians conquered the Papal States during the mid-19th century and the Pope retreated to the Vatican – this was a base built around a hill where St. Peter’s Basilica stood. The Pope stayed put and was not keen on the idea of being a prisoner in a Kingdom which he believed didn’t exist. To cut a long story short, Prime Minister Benito Mussolini came in and made some moves to make everyone happy.

He gave the Holy See its sovereignty, as well as lots of money. The Holy See, or Holy Chair, is the universal government of the Catholic Church. The Pope for his part acknowledged the Kingdom of Italy, promised to stay out of politics, and a deal was signed. That’s why we have today’s smallest country in the world.

But does it actually function as a Country?

Kind of, yes. It is governed by an absolute monarchy, with the Head of State being the Pope. He has full legislative, executive, and judicial powers, and if he should die and there’s some downtime, then the College of Cardinals wields those powers. It has its own courts that act under the authority of the Pope. It has its own police force, known as the Gendarmerie Corps of Vatican City State.

All Swiss Guard members are Swiss 19-30-year-olds who must be at least 5 ft 9 (179.8cm). They must also be Catholic, unmarried men, that have done some training with the Swiss Army. Vatican City does not have a military force but is protected by Italy.

What do people do for a living? Life In Smallest Country

Not surprisingly, just about everyone from the Pope down works in some capacity for the Catholic Church. Everyone is of Italian ethnicity (Vatican citizenship) except for those Swiss Guard we just mentioned. This could be one of the many cardinals that work in the country or working in some kind of administrative position. An amusing story we found was the job of the person or people responsible for overlooking the Pope’s tweets.

This went to a group called the Pontifical Council for Social Communications. According to Slate, positions such as this are not posted on job sites but people will be found via word of mouth. You can be a layperson and fill a position, but many of the lay people that work in Vatican City don’t actually live in the country. While its population might be only 795, CIA Factbook puts its 2016 labor force at 4,822.

It functions as a country in other ways, too, such as minting its own euros, printing its own stamps, and also issuing passports and license plates. It has a flag, a national anthem, and even has its own media outlets. It does not tax its citizens, however, and for money relies on things like admission fees for places of interest, and souvenir sales. Vatican City has small industries such as printing services, production of coins, worldwide banking and financial activities, and the production of mostaics.

The Holy See also has properties and land all over the world. Vatican City heavily relies on contributions, and those are substantial. It’s actually seen as a very wealthy place in the world. According to media reports in 2014, it was so wealthy hundreds of millions of euros were discovered in sectional accounts that were not on the country’s balance sheet.

How do you get to live in this rich country? Life In Smallest Country

Well, as it doesn’t have birthright citizenship, the only way in is if you are chosen. Even then it might be for a short stint, which can be renewable. There are no schools here, but religious training is given in parts of Rome. So, since you can’t work or study, you’re just going to have to settle for being a tourist.

You’d probably have a better chance of finding a job in the world’s smallest country in terms of population. This goes to the Pitcairn Islands in the southern Pacific Ocean. It’s estimated that the population there is around 50-plus people. These folks have an interesting story, with most of them being ancestors of British HMS Bounty mutineers that made the island their home in 1789. They also settled there with Polynesian tribe members.

The 50-odd citizens speak English or Pitcairnese, live under a government, for the most part, are Protestant Seventh-day Adventists, and they spend the New Zealand dollar. It’s a beautiful place, but when in 2015 the island sent a message to the British press that they needed people to emigrate there and that land was totally free, they got only one interested reply according to The Telegraph. New Zealand is 3,000 miles away. There is only one general store that opens three times a week, and you must order food three months in advance if you want supplies from New Zealand.

You might be stranded in the middle of nowhere, but according to the person responsible for bringing in more residents, “Once you are there, you are as connected as anywhere else. The island has electricity and the internet now.” The bluest waters you’ve ever seen, she said, adding that seeing the stars from this island is magnificent.