How did Europa's icy ridges form, and why could they be hiding extraterrestrial life? 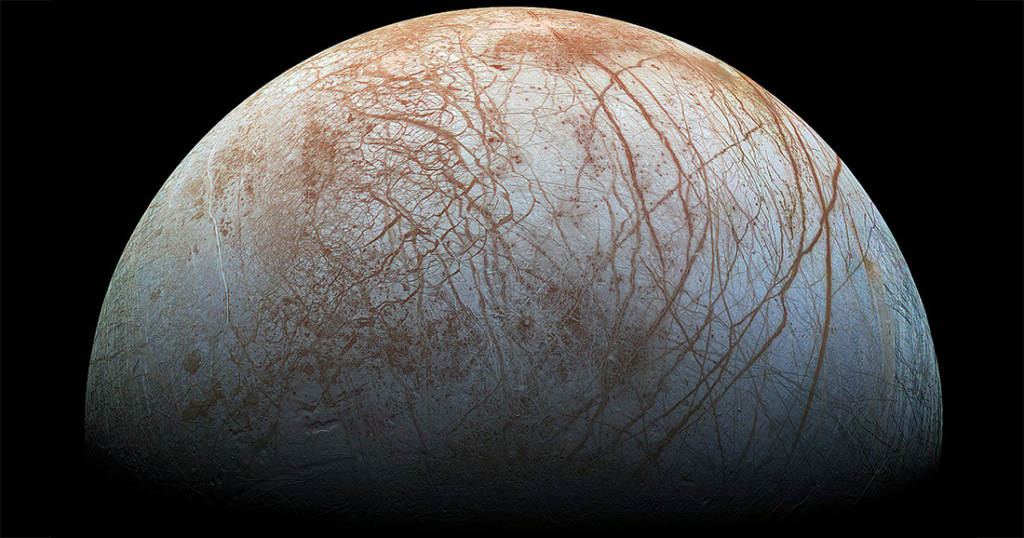 A recent study of Europa came about because geophysicists from Stanford University were attending a presentation that NASA was presenting about Europa (one of Jupiter’s seventy-nine moons) and noticed something they weren’t expecting to see.

The geophysicists saw something strangely familiar in the presentation images. They noticed Europa had giant ridges that reminded them of ridges they’d observed in Greenland’s glacier.

Bear in mind that Jupiter’s moon Europa is 390.4 million miles (628.3 million km) away in outer space, so its uncanny resemblance to Greenland would have been quite a surprise to these geophysicists who are not NASA scientists and were seeing the images for the very first time.

Dustin Schroeder, a geophysicist from Stanford University, thinks that the way similar ridges are formed in Greenland indicates what is going on with Europa’s ridges. It means there is water everywhere.

The Galileo probe took the images of these ridges in the 1990s. People had been studying the ridges for over 20 years.

What happens in Greenland may also be happening on Europa

How did these ridges form? A team has been able to study the data collected by NASA’s Operation IceBridge, observing radar data that started in 2015. In parts of the 2015 data that showed no ridges, ridges were found later in data collected in 2017. This means that ridges are actively forming in the ice of Europa, but what exactly is making them? Scientists think they have the answer by looking at how similar ridges form in Greenland.

When ice sheets fracture, it produces a double-peaked M shaped-feature in the ice. In Greenland, this type of activity happens when a pocket of pressurized water refreezes inside an ice sheet causing the ice sheet to fracture. Scientists now think that similar processes may be taking place in Europa.

Dustin and other geophysicists began to consider these ridges indicating a possibility for life to exist on or closer to the surface of Europa. Before this coincidental observation, scientists previously thought that if life did exist on Europa, it was in the ocean tens of miles below Europa’s ice.

A discovery by coincidence will influence NASA’s CLIPPER mission.

Without the coincidence of Stanford University geophysicists who had been to Greenland attending the NASA presentation about Europa, we would not have this new evidence that suggests it isn’t completely frozen. Scientists consider that below Europa’s ice, it may have a salty ocean warmed by internal geological processes.

By combining water at Europa’s surface with other chemicals from space, moons, and volcanoes, there may be a possibility that life may be able to exist, thinks Schroder.

The theories that Europa’s ridges are similar to Greenland’s ridges will have massive significance for NASA’s CLIPPER mission and may provide a foundation for how and where to scan for life.