Why Origins of Mars’ Moons Still Baffle Astronomers to This Day

The two moons of Mars remain a mystery to this day. 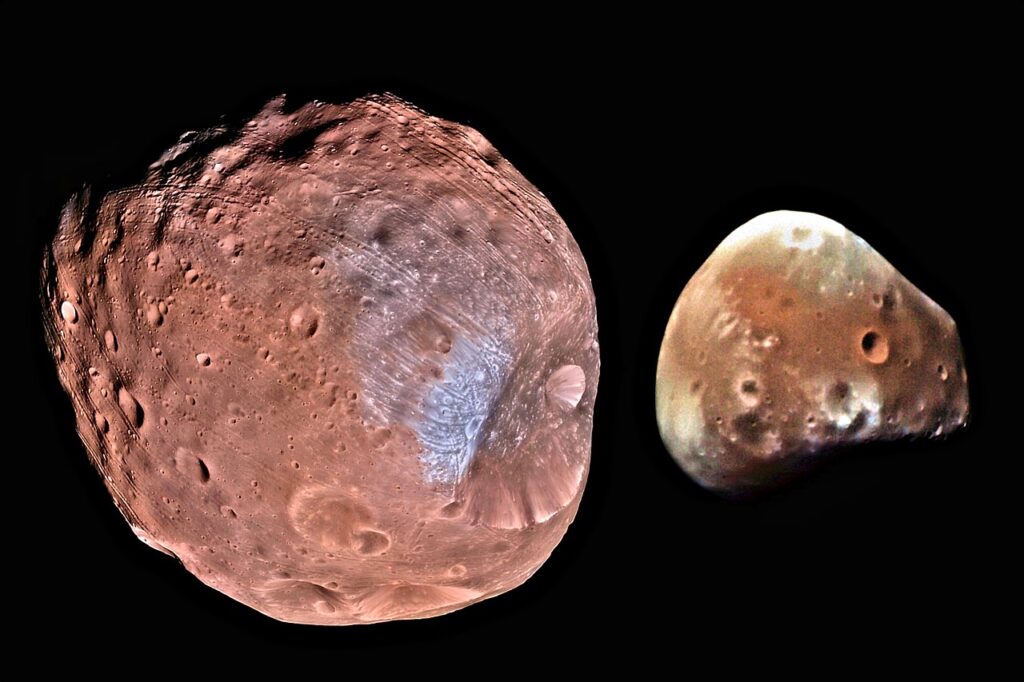 If we settled on Mars as Elon Musk hopes people will be able to do one day, our days and nights would be about the same length.  A Martian day — is 24 hours, 39 minutes, and 35.244 seconds.

There would be some noticeable differences we would see when we gaze at the Martian night sky.  Stuart Atkinson, Astronomy writer for skyatnightmagazine.com, ‘Generally speaking the Martian night sky would usually be as clear as a clear desert sky here on Earth. You would see two moons in that sky instead of one, and there would be a lot less interference from satellites.’

Scientists are particularly fascinated with Mars’s two bizarrely shaped moons called Phobos and Deimos. People settled on Mars many years from now on one romantic Martian evening may discuss wonder why Phobos is named after the Greek god who personifies fear and panic and why Demios is named after the personal god of dread and terror.

Any Martian who reads their history would know as Rupendra Brahambhatt, writing for interestingengineering.com, states, ‘These two satellites of the red planet were later named Phobos and Deimos, as suggested by an English chemist Henry Madan. Interestingly, the planet Mars was named after the Roman war god of the same name, and so its moons received their names from the twin horses (Phobos and Deimos that represent fear and panic, respectively) of the Greek counterpart of the Roman god, Ares. ‘

Martian real estate with the best views of the moons

Not every Martian stargazer will be fortunate enough to be able to observe the Martian moons.  Since Phobos and Deimos are orbiting very close, Mars’s curvature hides them from view from the surface.

Brahambhatt advises the moons ‘are not visible from any Martian region that is located at more than 70 degrees north or south (for Deimos, it’s 83 degrees) from the planet’s equator.’

If you are planning on buying real estate on Mars, the best view of the Martian moons is from the equatorial region of Mars. When ‘you look at the skyline during the night. Phobos would appear to you as a static asteroid at their highest brightness, and Demos would only look like a star. only.’   However, there are good reasons why you might not live under Phobos.

There is a good reason why Martians in the future may think that the Martian moon Phobos personifies fear and panic to them. Brahambhatt writes ‘From the data from different Mars rovers, astronomers have concluded that since Phobos is so close to the red planet, it may eventually be pulled apart by the gravity originating from Mars. Moreover, Phobos is coming 1.8 cm (0.7 inches) closer to Mars every century, so probably within the next 50 million years, it will either strike with the planet and turn into bits and pieces or break up and form a ring around the planet. This is why Phobos is also called the doomed Martian moon.’

In comparison to our Moon, which is 1,079.6 miles, Phobos and Deimos are considered tiny by our scientists as they measure only 13.8 miles and 7.8 miles in diameter, respectively. However, as a Martian, you don’t want to be around with the possibility of a 13.8 mile Moon hurtling towards your real estate on Mars’s equator. It may seem something terrifying, like a scene out of Moonfall.

Stargazers living on Mars will notice that ‘Deimos, which is located at a distance of 14,576 miles (from the center of Mars), takes approximately 30 hours to complete one orbital revolution’, and ‘Phobos which is moving in an orbit that is only 3,700 miles away from the surface of Mars has an orbital period of 7.66 hours. So, Phobos can perform three complete orbital revolutions around Mars in just one day.’

Compared to our Earth’s moon’s orbit, which takes 27 days, 7 hours, and 43 minutes to make a complete orbital revolution around Earth.  The Earth’s Moon is also a lot further away from the Earth than the Martian moons are away from Mars. Our Moon is an average distance of 238,855 miles from the Earth.

Lander craft is set to visit Phobos in 2024

Before we move to Mars, there are a few things that these moons can hopefully teach us first.  Russia made two failed attempts to send probes to explore Phobos in 1988, but that hasn’t stopped scientists trying to reach the Martian moons.

Japanese space agency JAXA now plans to send a lander aircraft to Phobos in 2024. The lander will collect rock and soil samples from Phobos and return in 2029 (just before NASA expects to have rock samples gathered by the Perseverance Rover back from Mars).

Researchers are hoping a moon landing on one of Mars’s moons will help their understanding of the origin of Phobos and Deimos, which will give insights into other space phenomena.

Both the Martian moons look like asteroids; if confirmed the moons are ‘made up of C-type space rocks that are primarily found in carbonaceous chondrite meteorites and asteroids,’ it may give scientists an insight into how other moons and planets formed.

Thomas Zurbuchen at the Science Mission Directorate under NASA says, “Solving the riddle of how Mars’ moons came to be will help us better understand how planets formed around our sun and, in turn, around other stars.”

There are several theories as to how the moons came about. Maybe the moons were originally asteroids captured in Mars’s orbit, or perhaps the moons came about because of a larger planetary collision with Mars, ‘Under the influence of gravity, the molten rocks may have formed larger clumps that later became Phobos and Deimos’.

Did Mars originally have one moon that broke into two?

A team of researchers puts forward the most recent theory about the two Martian moons from the Swiss Federal Institute of Technology (ETH Zurich), and the US Naval Observatory proposed that concluded that at the time of its origin, Mars was accompanied by a proto moon that later broke into two pieces.  Mars’s tidal energy caused the orbit also to turn circular.

Long before the Martian moons were discovered ‘German astronomer, Johannes Kepler had proposed that since Jupiter has four moons and the Earth has one, the red planet between them should have two moons. However, he couldn’t prove his number-based assumption.  Following Johannes Kepler’s theory, can we speculate that planets further out than Jupiter will have more moons? We now know Mars has two moons, and scientists are using them as an excellent opportunity to theorize how other moons and planets were formed.