Top 5 Most Deadly Air-To-Air Missiles in Use Today

Air-to-air missiles are evolving fast – and global military powers are fiercely competing to develop the deadliest and most advanced missile to achieve air superiority. 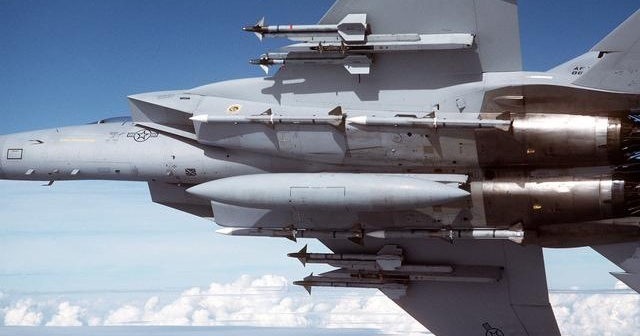 Air-to-air missiles are an essential part of any military arsenal. They provide a way for fighter jets to take out enemy aircraft from beyond visual range.

These missiles can be fired from long range. They can easily take out targets – and countries like China, Russia, and the US are working hard to develop the most accurate and deadly missiles to gain the upper hand in possible future conflicts.

The Russian R-37M is a long-range missile developed for the Russian Air Force.

The missile has a range of up to 400 kilometers (249 miles), making it one of the longest-range air-to-air missiles today.

The R-37M is considered to be very accurate, with a reported success rate of hitting its targets at over 90 percent and an impressive hypersonic speed of Mach 6 (7,400 km/h or 4,600 mph).

In addition, this Russian missile is equipped with a guidance system that allows it to home in on targets even if they are performing evasive actions.

The K-77M is a state-of-the-art weapon system designed to take down enemy aircraft.

This missile is equipped with a powerful radar system that can track up to 10 targets simultaneously, making it a formidable adversary for any air force.

It has an operational range of 193 kilometers (120 miles), and a top speed of Mach 5 (which makes it a hypersonic missile). The missile is also designed to be highly maneuverable, allowing it to evade enemy defenses and strike at its target with precision.

The Chinese Air Force has been developing new air-to-air missiles, including the highly effective PL-15.

It has a range of over 300 kilometers (186 miles) and is designed to target enemy aircraft at long range.

Also, it reaches a supersonic speed of Mach 4,5 – and like the K-77M, the PL-15 is believed to be equipped with an active radar seeker, which gives it the ability to track and engage multiple targets simultaneously.

The PL-15 is #China’s long-range air-to-air missile integrated with J-10, J-11, J-16 and J-20 fighters. An export variant has been sold to #Pakistan for its J-10 and JF-17 jets. #WeaponWednesdayhttps://t.co/cObA6PRkcJ pic.twitter.com/yaRgZ1TJQ8

As a result, the missile represents a major upgrade to the Chinese air force’s capabilities and is likely to have a significant impact on the regional balance of power, even if it is slower than the Russian K-77M or R-37M.

It is designed to provide an air superiority capability and can be armed with either a conventional or nuclear warhead. The Meteor uses a unique propulsion system that combines a ramjet engine with solid-fuel rockets, giving it an operational range of 200 kilometers (124 miles) and a speed of Mach 4.

It also features an advanced seeker head that allows it to engage long-range targets, even in the most hostile environments.

Consequently, with its unique capabilities, the Meteor is set to become the premier air-to-air missile in Europe in the coming years and serve as a deterrent to any Russian threat.

The US Military’s AIM-120D missile

The American AIM-120D missile is one of the top American medium-range air to air missiles. It was designed for use against targets such as fighters, bombers, and ground-attack aircraft.

It has a maximum speed of Mach 4 (4,900 km/h or 3,000 mph) and an operational range of 160 km (99 miles). The AIM-120D is also equipped with a data link that allows it to be controlled by the pilot after it has been launched –and this missile entered service with the United States Air Force in 2009.

It is the latest version of the AIM-120 missile, which was first introduced in 1991. The AIM-120D has several improvements over previous versions of the missile, including a more powerful motor, a larger warhead, and an improved guidance system.

Fighter jet dogfights are no longer the norm, and the more range an air-to-air missile has, the better it is for the air forces that operate it.

So, the competition to design the most effective, accurate, and the longest-range missile is likely to begin… and with the race to create hypersonic missiles on the horizon, we are sure to see even more impressive air-to-air missiles soon.