MrBeast Ranks as Highest-Paid YouTube Star Ever, Earning an Estimated $54 Million in 2021 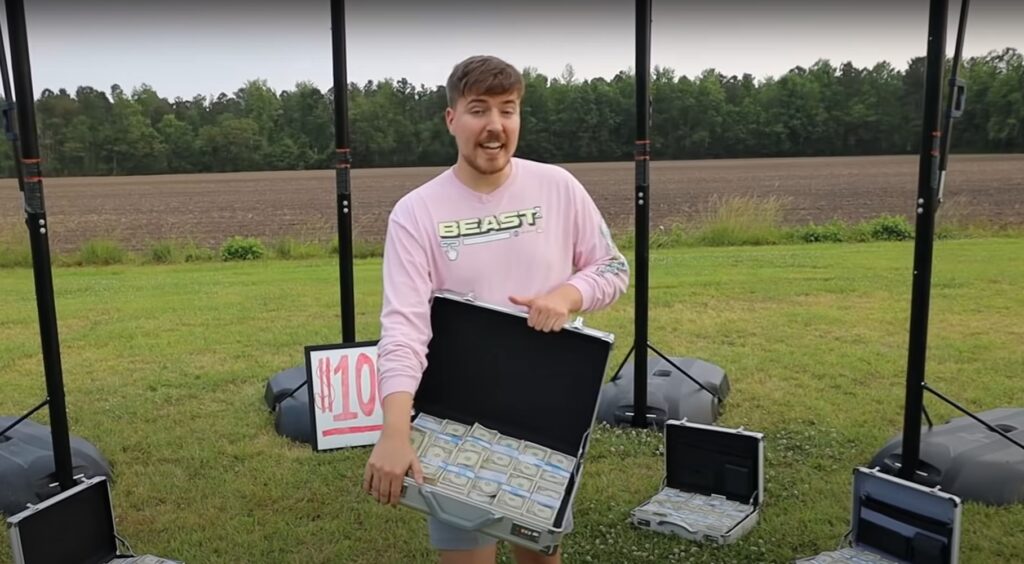 According to recent estimates from Forbes magazine, MrBeast, also known as Jimmy Donaldson, had a fantastic year in 2021, raking in $54 million in gross income, the most of any YouTube artist in history. His intricate stunts have racked up over 10 billion views on the platform, earning him $54 million (£39 million).

He has surpassed Ryan Kaji, a 10-year-old toy reviewer who has led the yearly list for the last two years.

In the second position, Jake Paul is is, making his first appearance in the top ten since 2018, while his brother Logan is back in the top ten after a two-year absence. MrBeast was followed by controversial YouTuber/boxer Jake Paul, who earned an estimated $45 million last year; game vlogger/comedian/podcaster Markiplier, with $38 million; and longtime comedy duo Rhett & Link, whose “Good Mythical Morning” talk show on YouTube celebrated its 10th anniversary this week, with $30 million.

MrBeast, 23, is known for his massive giveaways, stunts, and charity endeavors, such as his viral replication of Netflix’s “Squid Game.” The winner received a $446,000 reward. His YouTube channel has over 90 million subscribers at the time of writing. Donaldson is the CEO of a 50-person firm that includes Beast Interactive Games (which generated his successful “Finger on the App” contests) and launched MrBeast Burger, a virtual restaurant chain, last year.

Donaldson won the YouTube Streamy Awards creator of the year award in 2021. He also teamed up with YouTube founder Mark Rober for #TeamSeas, a $30 million fundraising drive to eliminate rubbish from bodies of water all across the world.

“If you look at recent years’ lists and check for any of the names, you’ll undoubtedly find them there as well, only in a different order.”

Many conventional entertainment media outlets struggled to adapt during the pandemic. Movies have been pushed back, soap opera dates have been changed, and video game releases postponed.

It was, however, a period of boom for YouTube.

According to estimates, the network will have 2.3 billion users globally by 2021. Each day, YouTube claims that one billion hours of video material are consumed on the free video sharing website.

According to Stokel-Walker, “YouTube was created to shake up the media sector and remove gatekeepers. It was supposed to democratize our society as well as the entertainment sector.

“This list implies that it has morphed into something more like to television than it would like to be. The presence of money on the site has raised the stakes for content, as seen by MrBeast’s work.

The high production levels of YouTube today, according to Stokel-Walker, are establishing a barrier to entry, implying that you must “pay to play and be successful.”

Forbes has recognized the top earners as effectively generating money from brand collaborations, sponsorship deals, and item sales rather than those who have the most views.

Even though two-thirds of YouTube material is not in English, it appears that English-speaking artists are among the top earners.

Like many other modern media platforms, YouTube is struggling with disinformation and controversial content, but this does not appear to be affecting the ability of its producers to attract advertising and sponsors to their channels.

Preston Arsement’s fanbase developed mostly due to Minecraft-related videos; however, he has multiple channels on YouTube.

He was a regular on this list, earning an estimated $16 million (£11 million) in 2021, a slight decrease from the year before when he was ranked sixth.

The world’s most renowned toy critic has plummeted to number seven on the list.

His mix of gadget reviews, instructional films, and family vlogs helped him earn $27 million (£19 million) in 2021.

On YouTube, the seven-year-old Russian has roughly 90 million viewers.

She began as a toy unboxer, but her vlogs and music videos have grown popular. Her earnings reached $28 million (£20 million) in 2021.

The Minecraft player is a newbie who has been uploading to YouTube for almost a decade.

Last year, he made $28.5 million (£20 million) by selling the rights to his back catalog to Spotter.

The geek talk program Good Mythical Morning hosts made $30 million (£22 million) in 2021, making them a regular on the YouTube top earners list.

Jake Paul has re-entered the top ten after branching out into boxing. In 2021, he earned $45 million (£32 million) through high-profile fights against UFC stars.

It’s a remarkable reversal for the inventor, who was chastised with his brother in 2017 for several of his vlogs, which were deemed offensive by many.

With additional boxing plans in the works for 2022, it wouldn’t be surprising if he remained among YouTube’s elite on the following year’s list.

YouTube’s top earner is a creative who delights his audience with stunts and pranks.

He played hide and seek in an 80,000-seater stadium and was buried underground last year, recreating portions of Netflix’s smash Squid Game on his channel.

Jimmy Donaldson almost quadrupled his income in 2021 after ranking second on this list the previous year, thanks to his 10 billion views and the MrBeast burger company.

The secret of MrBeast’s success? “Philanthropy as entertainment”

In recent years, MrBeast has become well-known for films that feature “philanthropy as entertainment.” Before Thanksgiving, he gave free 10,000 turkeys to families in Greenville, North Carolina. He became viral in 2019 after tipping a pizza delivery man a wholly furnished, mortgage-free house.

In 2018, he got popular after gifting $100,000 to his mother. She first declined the money, but he explained that she would have to accept the present for the video to go viral since the money earned from the video’s popularity is how he will be compensated.

MrBeast isn’t only good at making money off of various antics that he makes into video — he also does a lot of raising money for chairty and is very active in environmentalism. MrBeast and Mark Rober signed up with #TeamSeas in 2021, an international collaborative fundraiser endeavor to generate money and awareness for ocean and marine ecosystem cleanup. Together, they collected more than $30 million, promising to remove 30 million pounds of marine trash from the ocean by the end of 2021.