A huge crater basin in the Moon's South Pole reveals clues to how the near side of the Moon's layer formed. 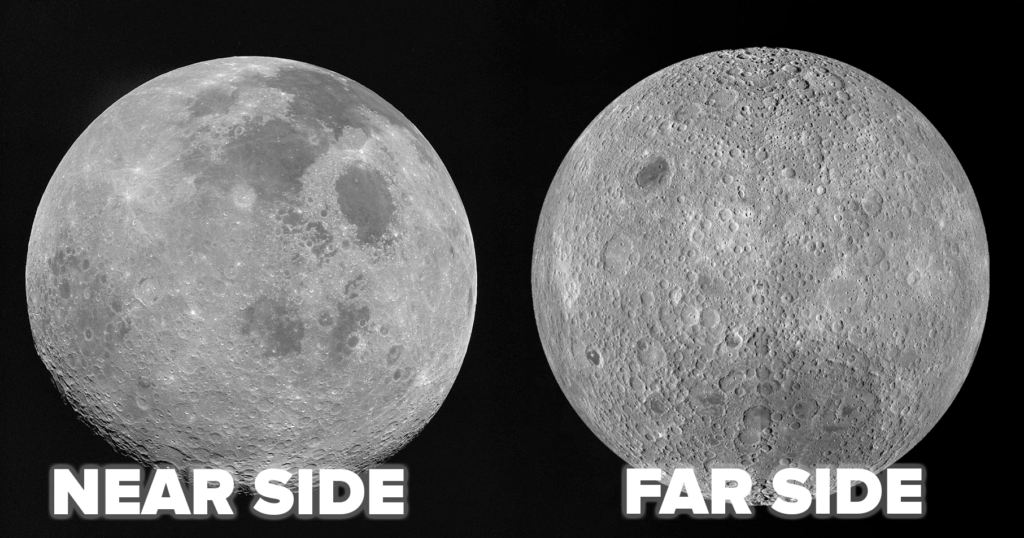 One side of the Moon gives the distant appearance of a burnt pizza leading people over the ages to either joke or believe that the Moon was made of cheese.  This is the near side of the Moon and is called the near side because it is the side facing Earth. It is covered with large dark basaltic plains.  These basaltic plains with visible dark volcanic deposits are dark remnants of ancient lava flows.

If you look at the south pole of the Moon, you will see a giant basin which is called the South Pole-Aitken.  Its diameter is roughly 1,550 miles and (3.9–5.1 mi) deep; it covers nearly a quarter of the Moon.

Is there a scientific explanation for the two stark differences between the near and far side of the moon, and why is such a large basin covering the bottom of the Moon?

Some researchers have come up with a suggestion. They include Matt Jones, a Ph.D. candidate, together with assistant professor Alexander Evans his advisor from Brown University, assisted by researchers from NASA’s Jet Propulsion Laboratory, the Lunar and Planetary Science Laboratory, Purdue University, and Stanford University.

After much theorizing, these researchers believe it likely that billions of years ago, a monster-sized asteroid collided with the Moon’s far side pushing lava and minerals to the Moon’s near side, which explains why the near side of the Moon is covered and dark basaltic plains and dark volcanic deposits.  They hope that future missions to the Moon will help them determine the geochemical composition.

The giant basin which is called the South Pole-Aitken (PKA) is evidence of a giant impact that hit the Moon.

The impact that was caused to the PKA is over eight and half times the size of the Earth’s largest known impact crater caused by an asteroid that was at least 6.2 miles in diameter. The Vredefort crater has a diameter of 180 miles and is the Earth’s largest.

There are smaller craters than this on Earth which are attributed to species extinction-level events such as the Cretaceous–Paleogene extinction event, also caused by an asteroid. The Chicxulub crater is a mere 110 miles in diameter compared to PKAs, 1,550 miles in diameter.  The asteroid that created the Chicxulub crater caused the death of three-quarters of the Earth’s animals and plants.

The Moon’s South Pole-Aitken (PKA) basin is presumed to be the second-largest impact crater in our solar system.  The first largest visible impact crater in the Solar System is detailed as the Hellas Planitia on Mars; the asteroid that hit Mars left a crater that was about 1,400 miles in diameter and 4.3 miles deep.

The effect of the collision would have been a massive plume of heat propagating through the Moon’s interior, forcing materials referred to as KREEP to create volcanic plains on the Moon’s near side.

The researchers were keen to conduct computer simulations that would show how the Moon’s interior convection patterns would have been altered by the heat of the collision.  They have tried to establish how the impact redistributed KREEP material.

Future missions to the Moon will be able to determine if the geochemical composition of KREEP is consistent with this theory.