Finally! After four months, NASA engineers managed to fix the problems with Voyager 1. But what exactly was the cause, and how much longer can this decades-old probe still carry on? 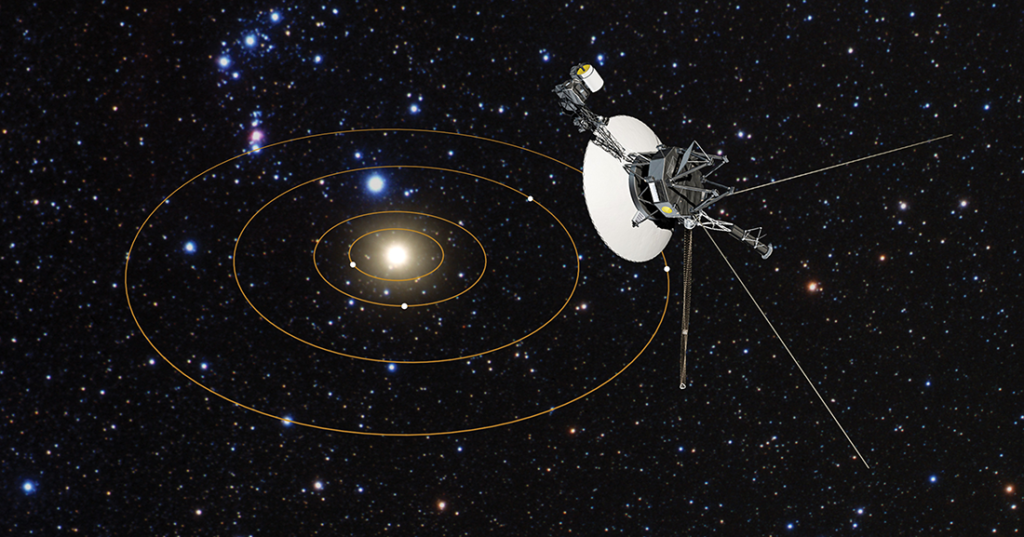 In the 1970s, NASA launched the Voyagers. Voyager 1 was sent into space in 1977 to study the planets at the edge of our solar system.

Now NASA’s VOYAGER 1 is the farthest human-made object from Earth. It is about 14.6 billion miles away, and its sister ship, Voyager 2, are the only ones that have made it out of the Solar System and into the space between the stars.

Then in May, Voyager 1 started sending weird, garbled nonsense back to NASA instead of telemetry data.

Did Voyager 1 develop a bad attitude in space?

The 45-year-old spacecraft appeared to be having a mid-life crisis and was having trouble communicating with Earth. Its “attitude articulation and control system,” or AACS, which keeps its high-gain antenna pointed at Earth, started sending confusing jumbles of data instead of the usual reports about the spacecraft’s health and status.

Even more confusing for engineers was the fact that Voyager 1 seemed to be in great shape despite its strange status reports. The ship’s radio signal stayed strong and steady, which meant that the antenna was still pointed at Earth and not in the position the AACS told NASA it was in.

In the same way, Voyager 1’s science systems kept gathering and sending data as usual, while the AACS was affected by the same strange things. Whatever was wrong with the AACS didn’t set off a fault protection system that puts the spacecraft in safe mode when there’s a problem.

NASA engineers could have been forgiven for calling it a day, but they didn’t! Now, after about four months, they have won. NASA engineers found a way to communicate with their wayward spacecraft, and now Voyager 1 is sending back data to Earth again.

In fact, the problem was easy to fix, or at least as straightforward as anything can be, when there is a 22-hour communication delay in each direction and billions of miles of space in between.

NASA engineers discovered that Voyager 1’s AACS had a little mishap and had started sending its telemetry data via an old, outdated computer. Unfortunately, this computer had long since stopped working, and as a result, the data became corrupted. NASA engineers had to step in and send the command to the AACS to use the correct computer to transmit its data home.

Why did Voyager 1 develop an issue? No one knows yet!

Next, engineers will have to figure out why the AACS changed computers in the first place. NASA says another computer on board may have sent a bad command to the system. Even though they say it’s not a big deal for Voyager 1’s health right now, the real cause will need to be found and fixed to stop strange things from happening again.

The Voyagers continue on their journey

‘Mysteries like this at this stage are par for the course’ according to Suzanne Dodd in a May statement. Cosmic rays are known to mess up electronics here on Earth. When one of these high-speed, high-energy particles hits a computer chip, it can cause small memory errors that add up over time. Voyager 1’s onboard computers will likely have the same problem. Voyager 1 has been traveling through interstellar space, far from the Sun’s magnetic field, for the past ten years. The field had shielded the ship from cosmic rays and other forms of radiation from beyond our solar system, just like Earth’s magnetic field shields us from high-energy particles and radiation from the Sun.

Both of the Voyager spacecraft are almost 45 years old, which is much older than what the mission planners thought they would get to. The Voyagers are also in interstellar space, where there is a lot of radiation and no spacecraft have ever been. But don’t worry, NASA has got a team of the best engineers working around the clock to make sure these bad boys, which occasionally need an attitude adjustment, keep on going!