Iskander-M missiles are one of the most feared weapons today due to their mobility and quick deployment, making them extremely hard to destroy. 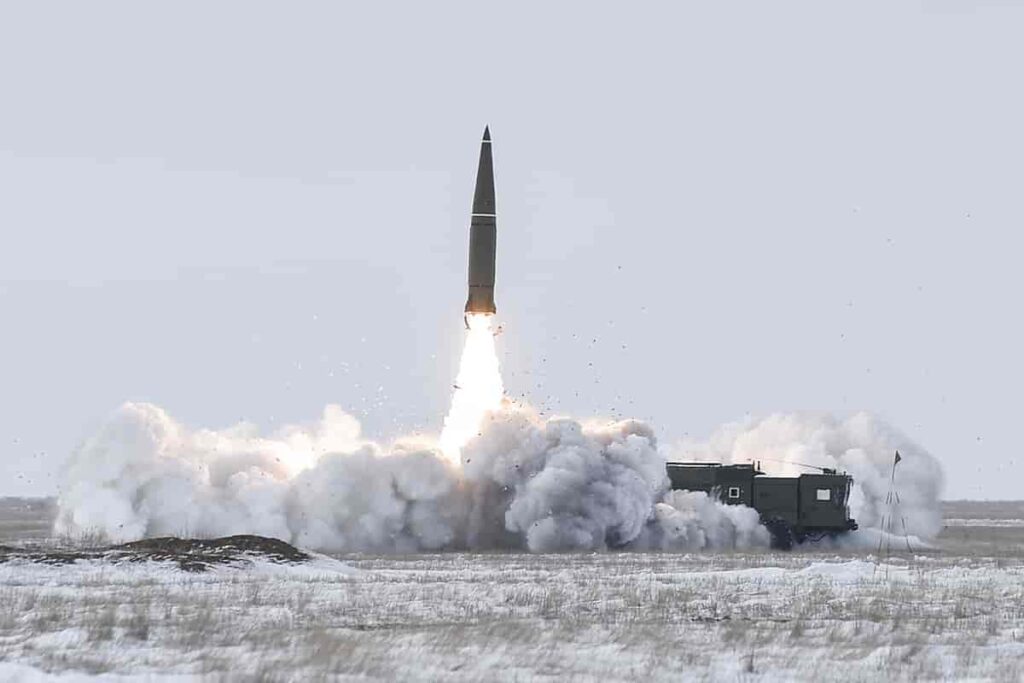 The Iskander-M missiles are one of the world’s most modern and sophisticated missiles. They are the pride of Russian forces – and the missile’s range, accuracy, and various payload options (including nuclear warheads) make them a significant threat to both military and civilian targets.

In the wrong hands, the Iskander-M missiles could be used to devastating effect… And now, it is also in the hands of the most reliable ally of Russia: Belarus, which shares a border with NATO’s ally Poland.

The Iskander-M missiles are Russian short-range ballistic missiles that were developed in the late 1990s and early 2000s.

It is designed to evade anti-missile defenses and can travel at speeds of up to Mach 5.6, almost six times the speed of sound, making it a devastating and unstoppable weapon that could be ideal for delivering a nuclear strike against US bases in Europe.

They are built to be launched from either road-mobile or rail-mobile launchers and are capable of carrying nuclear or conventional payloads.

Additionally, these missiles have a range of up to 500 kilometers (310 miles), which makes them a lethal enough threat to attack Ukraine or NATO allies from anywhere in Russia or Belarus.

The Iskander-M missiles system entered service with the Russian military in 2006 and has since been exported to Armenia and Algeria… In addition to Belarus, which will soon be acquiring it.

Russia and Belarus have a long history of alliance, dating back to the days when they were both parts of the Soviet Union.

Now, Russia has announced that it is giving Belarus this nuclear-capable missile system. The move is seen as a direct threat to Ukraine, which has been engaged in a conflict with Russian-backed separatists in the east of the country for over five years.

Putin said that the Russian Federation will transfer Iskander-M complexes to Minsk in the coming months.
So the United States will transfer ATACMS to Ukraine?#UkraineRussianWar #RussianWarCrimes #ArmUkraineNow #MLRSforUkraineNow #HIMARS pic.twitter.com/2LFb4gDC0P

While Belarus has remained officially neutral in the conflict, it has allowed Russia to use its territory as a base for supplies and troops heading to Ukraine.

As the conflict in Ukraine continues to escalate, Belarus will likely further cooperate with Russia by using its territory and volunteer soldiers to carry out attacks on Ukraine since the United States is already providing longer-range weapons to Ukraine to strike Russian troops and pro-Russian areas of Ukraine.

In fact, Ukraine is attacking the pro-Russian area with the artillery sent by the United States without mercy… Probably thinking that they won’t be able to recover it in the future. So, they are wiping out the Donbas region.

Precisely for this reason, Russia is preparing Iskander-M missiles as a direct response.

In addition to causing extensive damage to buildings and other structures, the Iskander-M also creates a large explosion that can kill or injure people caught in the blast radius.

While the Iskander-M is not specifically designed to target civilians, its use in populated areas often results in high civilian casualties.

The war in Ukraine has become much more brutal in the last few days, and more high-tech weapons are being fired… and now that Russia has almost total control of the eastern part of Ukraine, it will probably continue the attacks with these missiles launched from Belarus which can easily reach the capital of Ukraine.