Militarized SpaceX Starships may become the norm for transporting heavy military equipment around the globe.

It is speculated that a very unusual leak regarding SpaceX Starships was the cause of the delay in the launch of the SpaceX Cargo Dragon. Now that leak has become public.

It is no secret that the US government intends to dominate space with military space tech. Recent projects have included DARPA’s project to test a Nuclear-Powered rocket in space as early as 2026.

What is the real purpose of thousands of SpaceX Starships under construction? SpaceX founder Elon Musk gained much popularity in Tweet that went viral when he described his company’s Starship as a modern Noah’s ark and plans to build thousands of them to help bring life to Mars.

Elon’s viral tweet received more than 10,000 likes, and 800 people shared it with their followers. According to one of Musk’s followers, Starship is the modern-day counterpart of Noah’s ark.

According to Tech Times, Elon Musk has expressed his aim to build more than one thousand SpaceX Starships in the future. According to the opinion of the millionaire, increasing the number of these massive reusable rockets would make transporting humans to Mars simpler and more expedient.

After the release of leaked military documents, foreign military powers may consider Elon Musk’s idea of a mission to Mars as a front for other US military projects.

According to a leaked document circulated by many online news outlets, the US military is becoming interested in using SpaceX Starships which have a boasted payload capability of 100 metric tons (enough power to carry eleven elephants!).

An Antonov An-225 Mriya plane holds the record for being able to move 280 tons. By comparison, a Boeing 747 plane can carry 139 tonnes. Still, Starship has the potential to take payloads to space and deploy them on Earth when needed.

According to documents stolen from the United States Transportation Command (USTRANSCOM), the Pentagon may use the gigantic Starship spacecraft to transport essential military supplies.

Reports suggest that the US military could utilize this enormous spaceship to transfer supplies directly from the United States to a remote location in Africa.

According to Drive Tesla Canada, the documents from USTRANSCOM detailed how the Pentagon might deploy a fleet of weaponized SpaceX Starship rockets.

Implementing Starship rockets could be an alternative technique for delivering logistical supplies in the Pacific region, which uses the enormous spaceship. This proposal from the Pentagon raises the possibility of armed war with China.

Alternatively, SpaceX Starships could provide the Air Force with deployable air base systems using SpaceX’s reusable rockets as the primary means of transportation. Starships could be used to hoist heavy objects such as automobiles, construction machines, and other similar items off the Earth.

Environmentalists and others won’t be happy

Environmentalists and foreign military powers will not be pleased to see the fruition of Musk’s dream to build thousands of Starships.

Environmentalists had already voiced their concerns about the three consecutive launches of the SpaceX Falcon 9 rocket.

According to sciencefocus.com, the amount of kerosene that is contained in three Falcon 9 rockets is approximately 440 tonnes, and the carbon content of RP-1 is 34%. This quantity of carbon is a drop in the ocean when compared to the total world industrial emissions; however, if SpaceX’s goal for a rocket launch every two weeks comes to fulfillment, this quantity of carbon (about 4,000 tonnes per year) would quickly become a more significant problem.

Maybe we don’t have to worry about world military superpowers using militarized spacecraft to carry weapons to annihilate the planet. If environmentalists are right the emissions from the rockets alone will do the job.

Experts had previously queried the sanity of Musk’s plan to send a million colonists to Mars. Is a new plan unveiling? 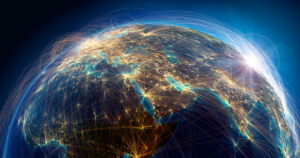