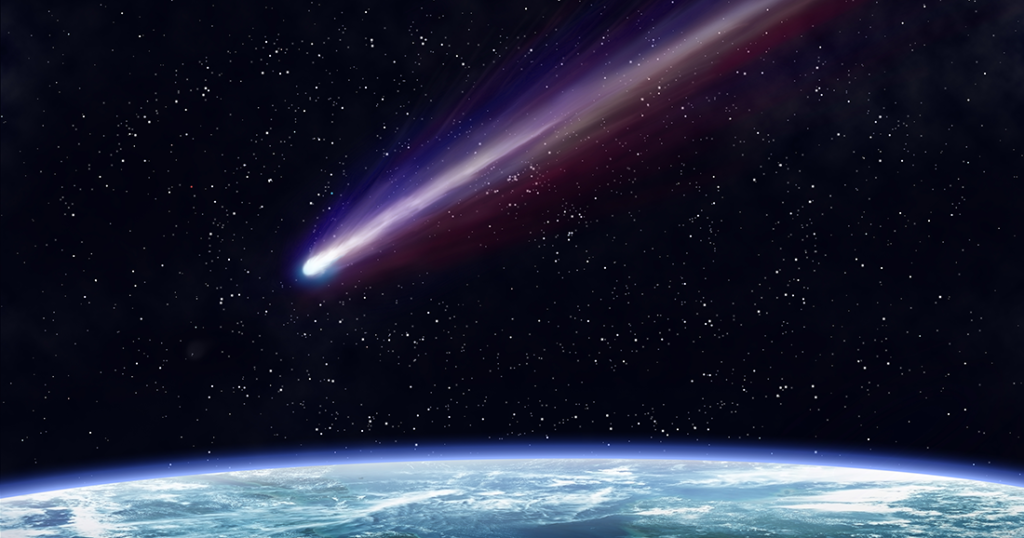 The story begins in 2014 with a fireball whizzing over Papua New Guinea at speeds reaching 130,000 miles an hour, likely scattering debris into the South Pacific Ocean.

This event left some quirky data that piqued the interest of two researchers, Amir Siraj and Abraham Loeb.

As active researchers in the Harvard Galileo Project (extraterrestrial technological signatures of Extraterrestrial Technological Civilizations), they had gone through all the declassified Pentagon data from 1998 to review records of fireballs.

This particular fireball, for some reason, stood out and interested them.  They began to hypothesize that considering this meteor’s unusually high speed, could it possibly come from another planetary system?

For years these researchers were frustrated that the US government had not shared information relevant to their research with the Center for Near-Earth Object Studies (CNEOS) database.  Without this information, they would not be able to complete a peer-reviewed academic journal.

The evidence which the researchers needed to collaborate with their research could only be supplied at the discretion of the Pentagon, which also use fireball detecting sensors.  Typically, the purpose of those sensors for the US Department of Defense is to detect nuclear detonations in the skies.  This is classified information that the US Department of Defense doesn’t typically hand over to people who are working on an academic project associated with searching for signatures of Extraterrestrial Technological Civilizations. Especially as alien hunters in the past have had a reputation for being a bit kooky.

The researchers were determined to get evidence to collaborate with their research. They went through a lot of bureaucracy following up leads with Los Alamos National Laboratory, NASA, until finally, Joel Mozer, chief scientist of Space Operations Command at the US Space Force. Mozer had access to the sensor data and released the memo confirming that “the velocity estimate reported to NASA is sufficiently accurate to indicate an interstellar trajectory.”

This event, apart from the fact that it was picked up by two Harvard researchers reviewing publicly available government data on fireballs, wouldn’t normally be very exceptional.

Tracking asteroids and comets from space

Our planet suffers constant intrusion from millions of space debris such as micrometeoroids and meteoroids entering our atmosphere every day, amassing as much as 15,000 tonnes every year.

However, most of this debris gets burnt upon contact with our atmosphere, but on a rare occasion, a large meteor can get through our atmosphere, like the one that wiped out the dinosaurs or smaller subsequent ones that flattened 830 square miles of a remote forest named the Tunguska event, or the Chelyabinsk meteor which created an airburst above Russia and causing panic and injuries among thousands of people damaging many buildings.

NASA Planetary Defence Coordination Office (PDCO) and United States Space Command (USSC) concern themselves with looking for the larger asteroids near Earth that could make an impact.  There are also academic institutions that track asteroids, such as Lincoln Near-Earth Asteroid Research (LINEAR) and the Galileo project, in which Amir Siraj and Abraham Loeb are involved in.

6/ “I had the pleasure of signing a memo with @ussfspoc’s Chief Scientist, Dr. Mozer, to confirm that a previously-detected interstellar object was indeed an interstellar object, a confirmation that assisted the broader astronomical community.” pic.twitter.com/PGlIOnCSrW

Our own solar system has some terrifying possibilities of where asteroids and comets could be projected from if they are knocked off course.  There is the Oort Cloud at the edge of our solar system, which is host to trillions of comets, including one approaching the Sun that, at 80 miles + in size, is the biggest comet ever observed. There is also the asteroid belt between Mars and Jupiter, home to Ceres.

Most of the small asteroids that create space debris on Earth come from the Asteroid Belt, which is located between Mars and Jupiter.  The Asteroid Belt is approximately 111.5 million miles from our planet.

Now the Pentagon has confirmed that the data in the case of this meteor that flew over Papua New Guinea originated from outside our Solar System and is an interstellar object; it opens the floodgate to more questions.

Interstellar objects penetrating our solar system aren’t a totally unknown phenomenon. This is the third interstellar object detected in our system; what makes this one different is that it is the first known one to enter Earth’s atmosphere.  This has been officially confirmed as an interstellar object in a memo released by the United States Space Command (USSC) on April 6th.

This discovery means that as well as the trillions of asteroids that can potentially hit Earth from our own solar system, the Earth is susceptible to potential asteroid threats from other galaxies.

Before the Pentagon confirmed this meteor was an interstellar object, all previous rocky bodies that fell to Earth were previously believed to have originated from our own Solar System.

Where will the findings lead next?

Siraj and Loeb posted research on their theory back in 2019 without peer review to preprint server arXiv.  Considering the Pentagon’s confirmation of the USSC memo, they will now submit their journal for peer review.

Amir Siraj is very interested in retrieving the debris scattered on the ocean floor and embarking on an ocean expedition to recover the first interstellar meteorite.  He hopes extensive analysis of a sample will help him understand its origin and the information it carries about its parent system.