We may need to revise our understanding of how planets are formed. 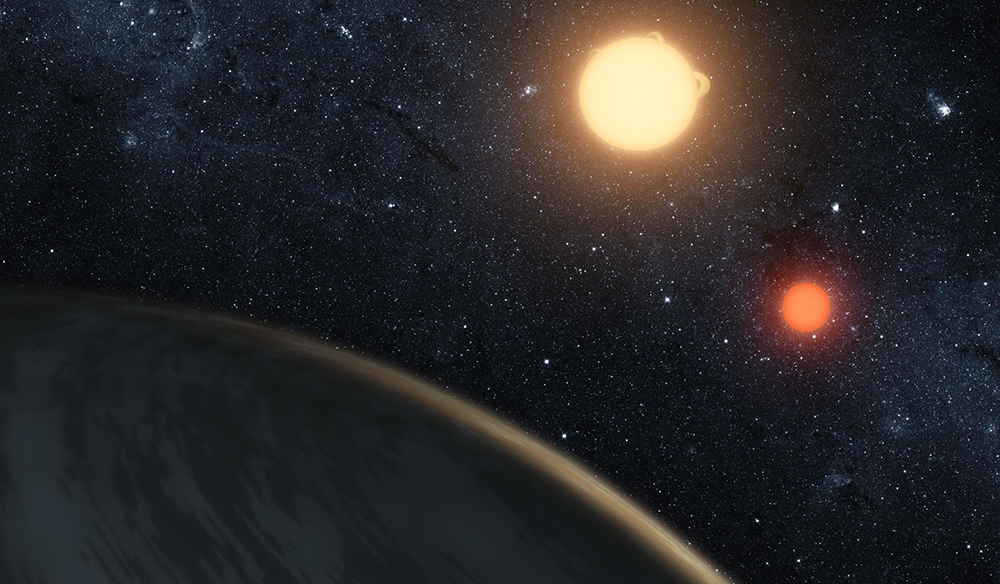 When astronomers look for exoplanets, the two most popular methods are:

Previously radial velocity had only been performed on single stars.

Michelle Starr writing for sciencealert.com, describes the radial velocity technique as much more difficult for observing a planetary system with two stars, ‘Binary stars are a more complicated prospect; since they orbit each other, they have much larger motions through space, which makes the detection of the much smaller gravitational tug of any orbiting exoplanets more difficult.’

Exoplanets orbiting multiple stars are real, not just the invention of fiction

The concept of a planet orbiting two suns isn’t just fiction.  In real life, the exoplanet Kepler-16b orbits around two stars; this is what scientists call a circumbinary orbit.

Scientists from the University of Birmingham (UK) are using radial velocity to analyze the two stars that exoplanet Kepler-16b orbits around (unlike our planet (the Earth), which orbits around a single star (the Sun)).

They are doing this to improve their understanding of how to use radial velocity techniques to discover new exoplanets and to understand how exoplanets orbiting multiple stars may have formed.

In astronomy, ‘using a well-characterized and well-studied target is a good way to find out if techniques work.’

The team led by astronomer Amaury Triaud wanted to see if, using radial velocity, they could detect Kepler-16b through the wobble of one of its stars.

The Birmingham science team concluded that they had successfully been able to use their techniques in radial velocity to get measurements that calculated the mass of Kepler-16b to be similar with previous estimates from other observations.

When a star wobbles, the motion changes the observed light.

If astronomers can understand how to analyse the wobbles in circumbinary such as Kepler-16b  (or even circumtrinary) orbits astronomers will be able to find more exoplanets.

Challenging our understanding of how other exoplanets are formed

It is a puzzle to scientists how circumbinary planets can exist, as the presence of two stars interferes with dust agglomerating into planets (a process called accretion).  Astronomers uses observations from radial velocity to help their understanding of other theories. Astronomer now think that the planet may have formed far from the two stars, where the star’s influence was weaker. The planet then could have moved inwards in a process called disk-driven migration. Radial velocity is challenging scientists to revise their understanding of the process of planetary accretion.

Understanding the complex gravitational processes of circumbinary and circumtrinary orbits may even give scientists an idea whether such planets could be habitable or not.