Railguns: Why This Futuristic Weapons Are Taking Forever to Develop 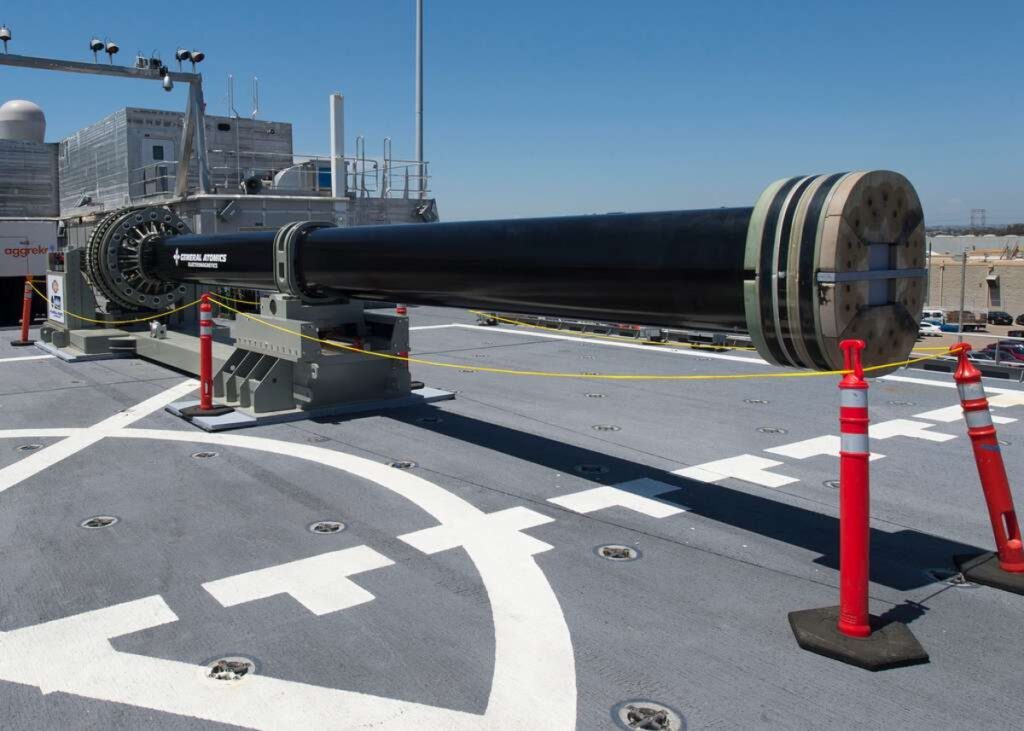 Railguns are cutting-edge weapons that have been in development for some years, but numerous engineering challenges have delayed their implementation on warships.

However, due to their high performance and power, the deployment of railguns is a project that cannot be easily dismissed and that could potentially break new ground and replace the use of standard gun systems.

How powerful is this new technology? Can it really be deployed on warships?

Electromagnetic railguns are weapons at an experimental stage, and their deployment on military vessels could bring about a real breakthrough in military naval technology, rendering many of the existing ships’ cannons practically obsolete.

Unlike conventional cannons, railguns propel projectiles forward through the use of an armature between two electromagnetic rails, by using a magnetic field driven by high electric currents drawn from a surface ship’s power supply.

This technology is still under development like other pioneering technologies like high-power laser weapons. But because of their great destructive power, they could be essential in future conflicts.

The railgun technology was initially conceived over a century ago by André Louis Octave Fauchon-Villeplée in 1917.

However, they only started to be developed in the mid-1940s, and it was only in the early 21st century that significant technological innovations allowed them to prove their incredible destructive power.

Now, the U.S. Navy is testing railgun launchers to be part of the arsenal of its aircraft carriers and naval vessels – and defense firms such as BAE Systems and General Atomics are developing electromagnetic gun prototypes.

How do they work?

A railgun is comprised of three main components: a power source, a couple of rails, and a sliding armature.

This weapon launches a projectile fabricated with very dense and rigid material, such as tungsten or any steel alloy. The projectile is ejected from the cannon at up to seven times the speed of sound (Mach 7 or 5370 mph) – and the kinetic energy is sufficient to cause severe damage to a surface ship without explosives and hit a target over 125 miles (200 kilometers) away.

The electromagnetic railgun could upend the use of traditional weaponry. 🧐#engineering pic.twitter.com/uSJUGdEyTW

The thrust is electromagnetic, which means that no explosive propellant is needed, which facilitates the manufacturing of projectiles and eliminates the risks of handling and stowage onboard in the always dangerous ammunition locker, reducing the ship's vulnerability.

Why aren't railguns operational yet?

The major issue with railguns is the power source as these cannons need to be linked to a nuclear reactor, and they demand a very sizable power supply.

Moreover, current railguns need to be repaired constantly, making them less convenient than regular gun systems in use. This means they have limited usability and would likely present a huge problem on long missions.

Another massive problem with railguns is that, at the moment have a very limited rate of fire that doesn't exceed eight rounds per minute and needs maintenance after a few shots.

As a result, many experts state that it's preferable to invest in reliable missiles systems rather than railguns. They are more likely to work as a deterrent in an actual combat scenario.

For instance, hypersonic weapons can travel at speeds of at least Mach 5, but it is their high maneuverability, unpredictability, and exceptional flight trajectory that make them especially threatening today, and there's no way to stop them right now.

So, investing in the development of hypersonic missiles seems to be more cost-effective than railguns today.

Actually, the U.S. Navy plans to equip some of these warships with hypersonic missiles, specifically the Conventional Prompt Strike weapon now under development. At the same time, the Navy is wary of expensive weapons projects with no certain results like the railgun technology.

Consequently, the U.S. Navy is phasing out research and development of the electromagnetic railgun to develop hypersonic missiles and lasers in the coming years… But the Navy can't completely discard the railgun research because there are other military powers working on deploying them in their warships.

China is also testing this technology

Aside from the U.S., China is also testing railguns and has even included them in its ships.

But there's no evidence that they managed to develop effective railguns. They are probably prototypes that are still under development and not viable weapons for real combat.

So, like the United States, Chinese engineers have a lot of technological hurdles to overcome to deploy and use these weapons effectively.

Railguns have massive potential but...

Electromagnetic railguns are a new weapon undergoing an experimental phase that has a high potential for warships of the future.

Their deployment on military vessels could bring a real technological revolution in naval technology, rendering many of today's ships basically outdated. But, it’s not in its current state feasible for deployment on naval vessels, and to see railguns in warships, we'll have to wait for this technology to become more cost-effective than conventional weapons.