This machine can also lower the amount of water used for growing crops. 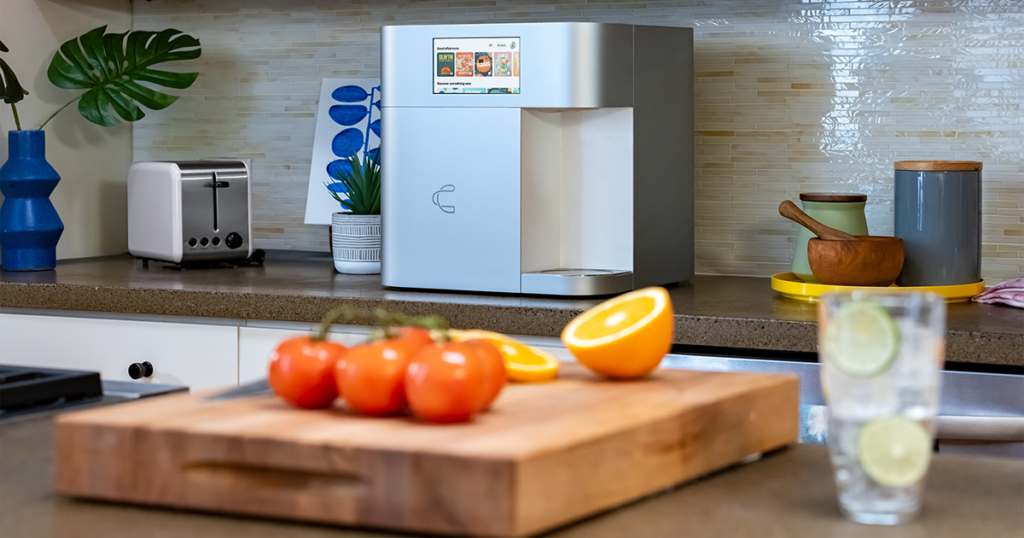 Cana, a California-based tech firm, introduces Cana One, the “world’s first molecular beverage printer” that allows users to produce ” thousands” of distinct beverage drinks right from their countertop. Cana one is a countertop machine that works similarly to a pod-based drink dispenser but does not require pods. It claims to provide one-of-a-kind discovery experiences, innovative brands, and options to suit any lifestyle or inclination. The machine’s touchscreen display lets users discover, explore, and make their ideal drink from thousands of beverage varieties and brands.

In a statement released early this month, the company announced the official presale of their forthcoming Cana One. “It is designed to provide each user with convenience, cost-savings, and an experience they didn’t realize they needed while also helping to clean up the planet,” says CEO Matt Mahar. He further explains that “It’s like having a bespoke beverage store in your kitchen — with zero fuss or trash from aluminum, plastic, and glass containers.” The announcement stated that interested individuals can begin to pre-order Cana One now, with an estimated shipping date in early 2023.

Cana can save the average family “100 beverage containers per month,” according to Mahar, who also hinted that “beverages are just the foundation; with our eyes on food and more beverages, we are taking ‘climate failure action’ to 10.”

Science in every drink sip

According to Cana, it took three (3) years for a team of experts at Cana to analyze popular drinks at a molecular level to separate the trace chemicals behind popular flavors and aromas to generate Cana One’s different drink options.

According to the company, the drinks printer uses “novel microfluidic liquid dispense technology” that offers people the option to customize the ingredient levels in every pour like alcohol, sugar, caffeine, vitamins, portion size, and other supplements.

The results sound too good to be true.

A single Cana One ingredient cartridge can make hundreds of different beverages by pulling recipes from its “universal ingredient set.” The company’s beverage page tout juice, iced coffee, soft drinks, iced tea, sparkling tea, energy water, flavored water, immunity water, sports drinks, hard seltzer, sophisticated cocktails – without the trash-generating, carbon-intensive, bottling complex, and industrial beverage. The company also mentioned the capability of the machine to brew wine. However, the wine is viewed with a healthy level of skepticism. Users can also use a pin code to lock caffeinated and alcoholic drinks so that children cannot access these options.

Cana claims that the machine can reduce waste and related emissions by assisting users in avoiding canned and bottled beverages. The company also claims that Cana One can lower the amount of water used to grow ingredients for wine and orange juice.

Cana One will use a one-of-a-kind pricing model to save costs. Users can reserve a Cana One now with an initial $99. This is a refundable credit towards the total price. Cana One will cost US$499 for the first 10,000 orders and US$799 afterward.

Customers will pay on a “per-drink basis”, depending on what they ask their Cana One to make. Advertised prices are $2.99 for a craft cocktail, $0.79 for an iced tea, and $0.29 for sparkling water. However, Cana claims the average price will be lower than bottled beverages at retailers.

Can this magical machine make drinks that taste good?

Cana emphasizes the use of high-quality ingredients, claiming that their machine recreates your favorite beverages from the molecule up, using all-natural ingredients you’re already familiar with and love. The firm also promises “exclusive beverages from popular brands.” Presently, Hella Cocktail Co is the only partner listed on their website. It’s still unclear whether they’ll ever land a deal with Coca-Cola or Pepsi.

“Every home in the industrialized world has water,” said Dave Friedberg, founder and CEO of the Production Board that built Cana. “We take only 1% of the water that distinguishes it from beer, coffee, juice, tea, wine, and liquor and transport it alone, basically creating a beverage printer. Everyone will find a favorite beverage brand instead of being participants in the lowest common denominator solution that the large companies designed for all of us. Everyone gets a better fit personalized for them.”

“Cana One gives users the ability to make any beverage, at any time, using the water from their tap – it is like magic,” said Cana CEO Matt Mahar. “The molecular printer allows you to make beverages at home using only the most essential 5% of ingredients in a highly optimized cartridge, which significantly increases the number of drinks you can make.”

Clear drinks are expected to be offered first. Other characteristics such as pulp, opacity, and viscosity are much more difficult to achieve until future versions of the device are released.

“The system that allowed us to produce the bottled beverage industry 150 years ago has gotten cheaper, faster, smaller, and better, and now it is in your kitchen,” Friedberg continued.

Is Cana One the future of the beverage industry?

It is impossible to say whether Cana One will be the beverage provider of the future. All the technology in the world won’t help if the drinks don’t taste good. If the beverages taste great and its pricing model stays low, Cana has the potential to save time, money, and the environment.

If you are a tech-obsessed – the early adopter type, Cana One might pique your interest enough to give it a shot. For additional information and to make a reservation, go to Cana.com.