Why did the Soviet Union cancel its Rikhter space canon project so abruptly? 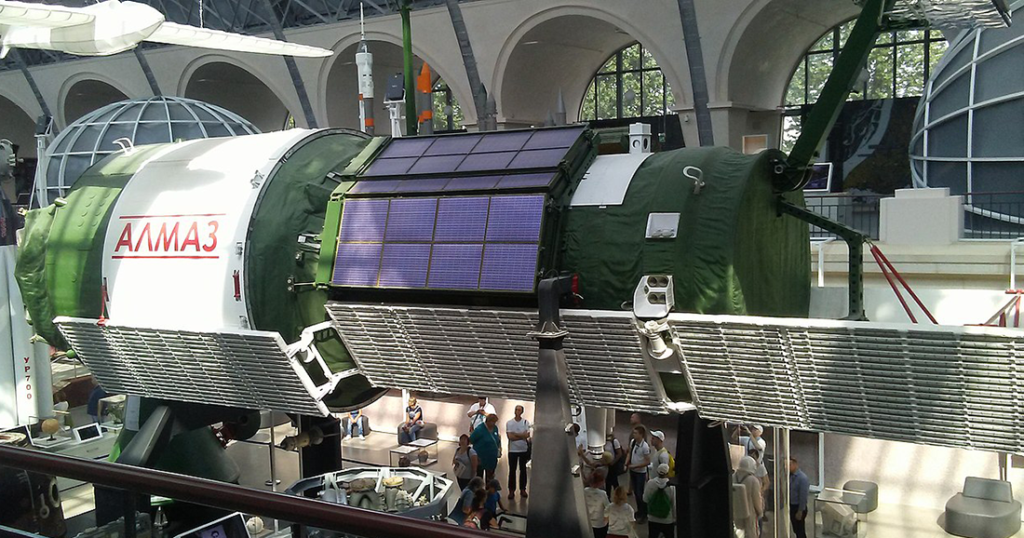 However before the DARPA project, other super powers were establishing their potential military strategies for space. China had already launched a satellite that had a robotic arm which could potentially grapple and disable other satellites.

In a recent article by Christopher McFadden writing for InterestingEngineering.com he shares some information that has been kept secret for almost 40 years about Russia’s first efforts to gain military supremacy in Space.

In his article he describes the Soviet Union’s frantic effort to have a space station in operation before the US and how the early Soviet space station hosted Russia’s first space gun the Rikhter R-23.

Not many people would know or remember that before DARPA’s ambitions for military supremacy in space, the Soviet Union was in fact the first and only nation to fire a cannon in space in the mid-1970s. The gun had been in development since the 1960s, it wasn’t until the 1970’s that the Soviets had developed a space station called the “Almaz” project to test the Rikhter R-23.

It was believed that the last armed Soviet space cannon and Almaz project was decommissioned in 1978. However, in 2016, Voennaya Priemka, a military show produced by the Zvezda TV channel affiliated with the Russian Ministry of Defense, aired some shaky footage of what is believed to be the space cannon.

…And after nearly half a century of waiting, finally, a clear visual of the legendary Almaz space cannon (left), along with my circa 2016 virtual recreation. FULL STORY: https://t.co/lmN0BSeWBo pic.twitter.com/o4kfirMC3t

This raises the question how many military spacecraft are orbiting the Earth right now? What would the capabilities of 1970’s weaponry in Space be like? Has more weaponry been sent into space since?

Was there a functional cannon on a Soviet space station?

The gun which the Soviet Union launched into space was based on a powerful revolver-like aircraft armament, is the only one officially known to have been fired in space.

Although the first project was decommissioned in 1978 it gives an interesting insight into the capabilities of space weaponry.

The weapon, which was based on a Cold War-era bomber tail gun cannon the Rikhter R-23. The weapon’s development was entrusted to the Moscow-based KB Tochmash Design Bureau, according to these papers. Aleksandr Nudelman, their chief engineer in such subjects, was promptly assigned to manage the project.

How powerful was the Russian space gun?

While Rikhter R-23 could be fired in the same way as on Earth, using an optical sight from the cockpit, it did not guarantee a hit.

You’d have to shift the entire spacecraft to center in on the target unless the target was gracious enough to approach within your field of fire.

According to veterans of the “Almaz” project, this is exactly what was accomplished. They were able to puncture a metal gasoline canister target from a mile distant during ground tests (1.6km).

How did the information of the Soviet space gun come to light?

The “Almaz” program remained classified until the end of the Cold War, despite the fact that Western intelligence and independent observers soon figured out who was who.

What happened when Rikhter R-23 was fired at Earth?

To carry out the test, the station’s jet thrusters were fired at the same time as the gun. This was to mitigate the gun’s strong recoil to the best of their abilities. This is especially true in low-g situations. The cannon apparently fired one to three explosions and roughly 20 shells, according to several accounts. According to reports, all of the shells burned up in the Earth’s atmosphere

While the test’s exact results are still classified, it appears that future Soviet armed space stations will be equipped with missiles rather than projectile weapons.

What do we know about the actual space cannon?

The gun was a version of the Soviet Rikhter R-23, according to documents and sources. In the late 1950s, the Soviet Union developed an aircraft autocannon for use aboard Soviet aircraft. It was specifically developed with a small barrel to avoid concerns with directing weapons into the airstream of high-speed jet aircraft.

It was the fastest single-barrel cannon ever placed into service, firing roughly 2,000 rounds per minute.

Due to the technological challenges of such a weapon, it took a long time to develop and was not operational until the mid-1960s.

The gun was principally utilized as the primary armament for the Russian Tupolev Tu-22 strategic jet bomber’s defensive tail turrets.

How did the Soviet Rikhter R-23 space cannon launch?

The Salyut-3 (aka “Almaz” OPS-2) space station was equipped with the RM-23 gun. This was the Soviet Union’s second military laboratory in orbit, launched in 1974, however it was officially classified as part of the “civilian” Salyut series.

The OPS-2 space station was launched from the “left hand” launch pad at Site 81 in Baikonur on June 25, 1974, after some technical issues throughout the night. Months later, Salyut-3 was ready for its top-secret missions.

The official payload for OPS-2, according to official records, contained but was not limited to:

During its brief existence, it was assigned to two crewed missions: Soyuz-14 and Soyuz-15. The former occurred in early July 1974, with crew members spending 15 days onboard.

The station’s “remote-sensing equipment” was turned on during this time and was used to image wide areas of the Earth’s surface. Various system inspections and other housekeeping activities were also performed by the crew. The station’s onboard camera films were also reloaded.

The second mission took place in late August 1974. While the crew was instructed to “[test] multiple rendezvous modes during its mission,” it has now been discovered that they had serious difficulties docking.

The Igla (“needle”) rendezvous system failed to transition to final-approach mode when Soyuz-15 approached the station at a distance of roughly 300 meters. Instead, it sent out a series of directives that would normally be sent out kilometers from the docking spot.

This means that Soyuz-15 and its crew were launched at 72 kilometers per hour utilizing thrusters toward the station. Fortunately for everyone involved, Soyuz-15 avoided a direct hit and missed the station by around 40 meters.

Because the crew failed to notice the fault (and turned off the Igla), the rendezvous system attempted to re-establish radio contact with the target and sent the Soyuz-15 back to the station twice more, narrowly missing a deadly crash.

The crew just had enough fuel for the fall down to Earth when ground control ordered the deactivation of the Igla, hence the mission was cancelled.

Following a study into the potentially disastrous circumstances of the Soyuz-15 flight, the required changes to securely dock future trips to the station were considered unworkable, and the station was planned for destruction.

While only seven months in orbit, Salyut-3 actually outperformed initial projections for the space station.

Salyut-3 made a number of firsts in space history during its brief existence, including carrying the first operable space weapon. It was the first, for example, to retain a continuous Earth surface orientation. This was accomplished by firing the ship’s attitude control thrusters 500,000 times.

Why did the Soviets launch a cannon into space?

The Soviet Union was vigilant about the risk that American spacecraft were becoming even more sophisticated in their ability to approach and monitor Soviet military space assets during the Cold War. The Soviet Union was naturally highly protective of its secrecy. This is especially true because, according to official Soviet propaganda, these military space assets did not exist.

As a result, it was only natural to consider ways to enable spacecraft to have some type of self-defense, such as genuine kinetic weaponry.

In response to U.S.A’s Cold War capabilities the Soviets developed “Almaz”. “Almaz” was a livable space station that was originally intended solely for military use, especially reconnaissance. This was a clear asset to protect Russia from possible opposing interests.

Why was the Almaz project disbanded?

The Soviet military’s focus began to shift towards using crewless satellites to perform a similar job. They were competing against the U.S. which was supposed to finish and launch its Skylab space station in 1973.

This would put the Soviet Union in danger of losing the contest to be the first country to launch a space station into orbit. As a result, efforts were redoubled to complete the project first.

The completed vessel, an orbiting laboratory, was launched successfully in 1971 and given the name “Salyut.” This accomplishment had a direct impact on public opinion, bolstering Kremlin support for the “Almaz project.”

Because the hurry to launch the first space station was over, there was more time to properly flesh out the more sophisticated Almaz station. By 1982, the Soviet Union had successfully deployed seven space stations in orbit, all of which were known as “Salyut.” Three of these, however, were “Almaz” spy posts.

While many specifics regarding Salyut-3 and its notorious space cannon remain unknown, there is little doubt that it was one of the most significant occurrences in the history of space exploration.