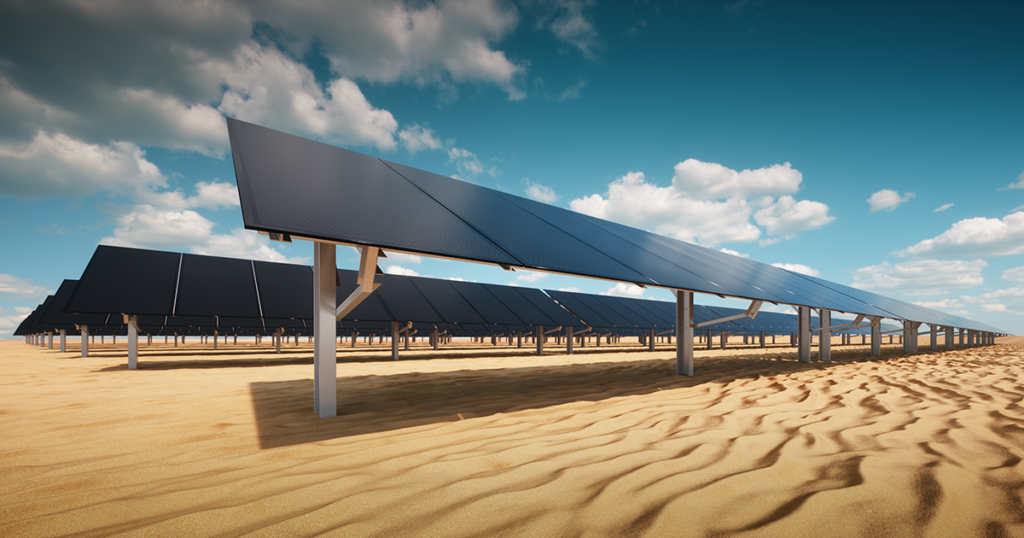 The Sahara desert seems like a perfect place for solar energy production. Solar energy seems good; in terms of carbon emissions, people consider it the cleanest energy that doesn’t harm the environment.  Solar energy ‘produces clean, green power in the form of electricity and can be used to power just about everything we need.’

There is one primary consideration; solar panels contain ‘toxic materials like lead that can leak out as they break down.  For starters, you would want to find somewhere where you wouldn’t get many animals or children wandering about, somewhere far away from water in case the panels broke and leaked and caused an environmental hazard.

Having ruled out the liabilities of humans, animals, and water, you would then begin to think about the places where solar panels can most effectively harness sunlight.  You would probably avoid the earth poles where the solar panels would get covered in snow or damaged by storms. You would probably think of somewhere sunny near the earth’s equator line; how about the Sahara Desert?

The Sahara Desert would seem to tick all the right boxes where most people with reasonable intelligence researching for a big fat consultancy fee would determine where solar panels should be put.  Furthermore, if you suggested putting solar panels in a desert, you would get extra brownie points because ‘Deserts are spacious, relatively flat, rich in silicon – the raw material for the semiconductors from which solar cells are made — and never short of sunlight.’

Also, the fact that ‘the ten largest solar plants around the world are all located in deserts or dry regions.’ would credit a consultant’s decision to put a solar power plant in the desert.  It is a very well-trodden path for implementing this green energy solution.

Like other consultants in the solar industry, some researchers have put together blueprints for ‘projects in Tunisia and Morocco that would supply electricity for millions of households in Europe.’  If the Sahara, the world’s largest desert, were turned into a giant solar farm, it would be capable of ‘meeting four times the world’s current energy demand”.

Unfortunately, recent scientific findings into these projects’ impact state that putting thousands of miles of solar power panels in the desert would actually cause more harm than good.

The crux of the problem is ‘While the black surfaces of solar panels absorb most of the sunlight that reaches them, only a fraction (around 15%) of that incoming energy gets converted to electricity. The rest is returned to the environment as heat.‘

Heat emitted from thousands of miles of solar panels…

Due to the large scale of the planned projects ‘covering thousands of square miles. Heat re-emitted from an area this size will be redistributed by the flow of air in the atmosphere, having regional and even global effects on the climate.’

Scientists have used an analysis model that indicates when ‘20% of the Sahara is covered with solar farms it raises local temperatures in the desert by 1.5°C. At 50% coverage, the temperature increase is 2.5°C. This warming is eventually spread around the globe by the atmosphere and ocean movement, raising the world’s average temperature by 0.16°C for 20% coverage, and 0.39°C for 50% coverage.’

Suppose the scientists’ modeling prediction is correct. In that case, the impact from increased temperatures around the globe caused by putting thousands of miles of solar panels covering the Sahara will result in environmental catastrophes such as ‘increasing sea ice loss in the Arctic,’ leading to ‘more frequent tropical cyclones hitting North American and East Asian coasts.‘