Scientists Are Inching Closer to Making ‘Jurassic Park’ a Reality, But Should They?

Scientists have learned enough about DNA to potentially recreate dinosaurs as we saw in 'Jurassic park.' But is it ethical to bring these creatures back from extinction? 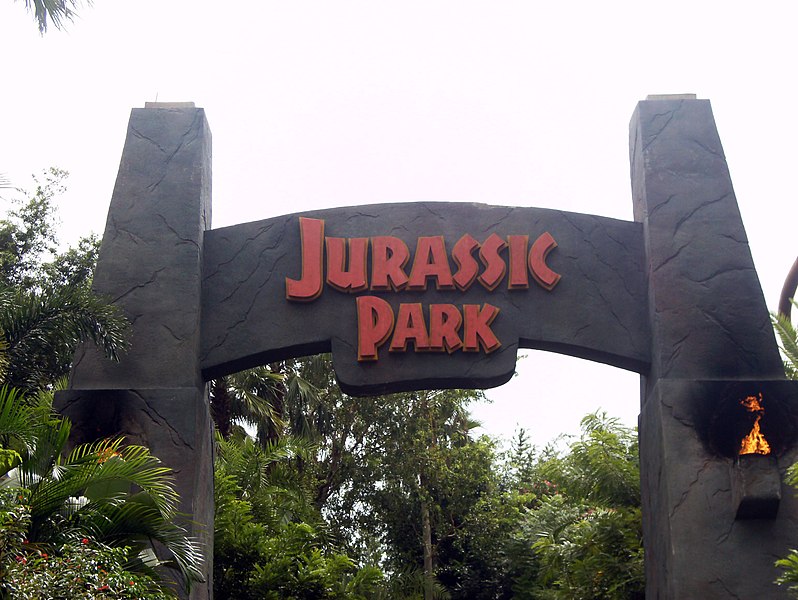 If you’ve seen or read about “Jurassic Park,” you may already have an image of what a dinosaur might look like.  The movie’s famous theme tune may play in your head as you imagine herds of long-necked monsters parading across the land or the gruesome visuals of park guards becoming easy meals for these giant creatures.

We cannot dispute the pleasure of the dinosaur park because of its large, never-before-seen species.  But can a Jurassic Park really happen?  Herds of woolly ‘mammoths’ might be roaming the Siberian tundra in just a few years if a biotech firm is successful. But bringing back an animal closely related to the modern age elephant and extinct for only a couple thousands years is a lot easier than bringing back species that have been extinct for several million years.

One of the last things Michael Crichton wrote when he first envisioned the “Jurassic Park” narrative in the late 1980s was possibly the most significant. How would the scientists in the story get the DNA they need to develop a dinosaur theme park? This would be the key to the entire scenario, providing a sense of scientific realism to the story. As reported in Science Friday, Crichton was eventually motivated by a scientific report he read and incorporated it into his bestseller book Jurassic Park.

In 1982, a fly was discovered preserved inside hardened tree resin, according to research published in the journal Science. This was a real-life discovery and not just a vivid imagination that led to the formation of this imaginary land. The story of “Jurassic Park” and the science at its heart would inspire the next generation of paleontologists, introducing dinosaurs to the general public.

The number of unanswered questions concerning dinosaurs, with just clues of their enormous size, excite people the most.  What did dinosaurs look like in real life, and how did their distinctive appendages help them roam the land in various groups?

Nobody knows the answers to these questions since humans have never lived alongside dinosaurs. As scientists discover and research new fossils, we continue to learn more about dinosaurs. For the records, over 700 dinosaur species have been found by scientists globally.

Scientists are looking to reverse extinction by reintroducing long-extinct species back into our lives. Scientists can carefully build backward and alter a model of the species’ DNA by editing the genetic code in the DNA of extinct creatures’ closest surviving relatives.

The most challenging obstacle to overcome before creating a dinosaur park is to source for dinosaur DNA. Without it, it is impossible for researchers to clone actual dinosaurs.  New fossils are discovered daily in the ground.  But while this can be useful in determining a species’ form, the biological material has long since vanished. Dinosaur fossils are made up of rock and sediment that have taken the place of bone.  While these hints can provide information about a specimen’s shape and size, the time it was alive, and any distinguishing characteristics it possessed, they cannot provide genetic information.

Bailleul was looking at a young hadrosaur’s fossilized skull from a collection at the Museum of the Rockies in Bozeman, Montana. The young hadrosaur is a duck-billed, plant-eating beast that roamed what is now Montana 75 million years ago.  Bailleul wanted to figure out how they evolved, but something drew her attention as she looked through a microscope.

What looked to be fossilized cells were embedded in calcified cartilage towards the rear of the skull.  Some had small structures that looked like nuclei. One contained what appeared to be a clump of chromosomes, the DNA-carrying strands of a cell.

Mary Schweitzer, a professor, and researcher in molecular paleontology at North Carolina State University, visited the museum when Bailleul showed her the fossils. Bailleul’s discovery piqued Schweitzer’s interest, and the two collaborated to learn more about the fossils.

They issued a bombshell study on their findings in early 2020 when the globe was struggling with the arrival of the Covid-19 pandemic. Their findings included not just evidence for dinosaur cells and nuclei in the hadrosaur bones but also chemical analyses that revealed DNA, or something similar to it, coiled up inside.

The concept of retrieving biological material from dinosaur fossils is both controversial and significant. Schweitzer does not claim to have discovered dinosaur DNA because the evidence is insufficient.  However, she believes that scientists should not rule out its potential to survive in prehistoric remnants.

She says, “I don’t believe we should ever rule out acquiring dinosaur DNA from dinosaur fossils.” “We’re not there yet, and it is possible we won’t, but I guarantee we will not if we do not keep looking.”

Rather than recreate the monsters, Schweitzer desires to learn more about them.  Organic molecules preserved in dinosaurs’ fossils could give an insight into the dinosaurs’ enigmas.  Did they create enzymes to increase the nourishment they got from plants?  How did they manage CO2 levels that were more than twice as high as they are now?  And how did they manage their frequently colossal physiques?

“I don’t think it’s unrealistic to expect informative DNA as technology and our understanding of degradation improve,” she says. “Imagine the questions we could answer if we did — that excites me.”

An article published in The Conversation showed that many paleontologists are suspicious of this assertion because it is widely considered that the protein in these molecules could not survive for millions of years. The cartilage is from a Cretaceous Period Hypacrosaurus species and is almost 70 million years old, but it has been calcified and petrified, which may have safeguarded the cells inside.

Is it possible to make a dinosaur like in Jurassic Park?

Crumbs of prehistoric tissue, proteins, or DNA could revolutionize molecular paleontology and shed light on many of dinosaurs’ puzzles.  But the thought of knowing the complete genetic code of a tyrannosaur or velociraptor poses problems that scientists have been asking about since the release of the first Jurassic Park film in 1993.

Could we save the ponderous beasts from extinction if we had enough dinosaurs’ DNA?  Scientists are trying to work out something, although the process would be pretty different from how it’s portrayed in the famous movie franchise Jurassic Park.

“We believe we have found DNA signals. There may be a few small amounts left, but not sufficient to build a dinosaur.

Collagen and some dinosaur proteins can be easily gotten, but not all of the materials we require, “Jack Horner, a paleontologist, said.

“It would be absurd to put the DNA in an ostrich egg if we had it. The best thing is to develop it in a test tube because we have no idea how big dinosaur embryos are.  Some dinosaur eggs are the size of ostrich eggs, but we believe Tyrannosaur eggs are far longer and larger.  It’s like considering implanting a human fetus into a squirrel.”

Horner is the real paleontologist who influenced Alan Grant’s character in the “Jurassic Park” movie. In comparison, he considers cloning to be a work of fiction, but that hasn’t prevented him from attempting to bring back the dinosaurs.

“I really have a dinosaur-making lab where we’re trying to figure out how to produce one.  The initiative is known as the dino-chicken project, which is based primarily on genetic engineering.  The concept is to make use of atavistic genes. They are essentially ancestral genes, meaning ancestral creatures programmed them.”

Horner intends to use these atavistic genes to his advantage. “I was expecting that some of the dinosaur’s characteristics might be atavistic in a bird.  Since all bird species are related to dinosaurs through a common ancestor, so any bird should work. I discovered that it’s easy to get eggs from chickens, so I established a laboratory, engaged geneticists and developmental biologists, and began searching for some of these probable atavistic genes, “he explained.

“We’ve largely been working on the tail since it seems to be the most difficult aspect. We found that the change from a long-tail dinosaur to a short-tail bird does not result from an atavistic gene.  Hence, we want to understand how the tail functions and reverse the mechanism that resulted in the short tail,” he further explained.

Are we any closer to making a dinosaur?

“The face, teeth, arms, and hands have all been examined in other laboratories. I believe we will be able to complete the rest of the body.  We have the possibility of creating an animal with a dinosaur-like skull, most likely with fangs, and we can absolutely reverse the wings to create arms and hands. We know we can accomplish it, but we’re focused on fixing the tail “Horner remarked.

How would we coexist if we were able to bring dinosaurs back from the brink of extinction?  Humans would not have been able to evolve if dinosaurs had not gone extinct.  Mammalian species coexisted with dinosaurs for 150 million years, although these animals were nocturnal and lived in caves.  This shows that the only option for mammals to coexist with dinosaurs was to emerge at night to hunt. Since our lives are so dissimilar from dinosaurs’, there’s no way of knowing what would happen if dinosaurs and humans shared the same territory.

Observing human behavior in the presence of today’s huge predators, it is improbable that the two species could coexist in the wild. Humans take up so much land space that releasing predators like dinosaurs into the wild would almost certainly end in a land battle.

Horner has a different view.

People usually ask where I’m going to put these dinosaurs when they are created.  I usually say, “We started with wolves thousands of years ago, and now we have chihuahuas.”

“We don’t have to restrain dogs because they’re like wolves.  Similarly, dino-chickens aren’t the same as the dinosaurs in Jurassic Park. We won’t have to worry about them because they’ll be domestic animals,” he said.

“You’d have to worry about containing an actual Tyrannosaur if you were cloning one.  Dogs and cats used to be wild, but we no longer had to cage them, at least not to the point of creating a park,” he continued.

Even if we overcome the problem of bringing Jurassic park to life, could we keep dinosaurs alive?

According to New Scientist, specific analyses of air trapped in amber reveal that its composition during the Cretaceous Period may have been 35 percent oxygen, compared to current 21 percent.  However, throughout the dinosaurs’ long existence on the planet, this number is thought to have fluctuated significantly. As a result, certain species might be better suited to our air than others.

The National Oceanic and Atmospheric Administration have also concluded that when dinosaurs roamed the Earth, the global temperature would have been significantly greater than it is today.  An island in a tropical region of the world would be the greatest hope for providing temperatures suitable for many dinosaurs.

As regards confining dinosaurs, the park would have to look quite different than it was in the movie. “There must be walls surrounding the dinosaurs to keep them in if you really want to establish a Jurassic Park and aren’t just producing a movie.  The use of electric fences would be a bad idea. Since electricity can go out, a reinforced concrete wall will make a better option,” Horner explained.