In a world first, genetically modified mice reproduced with healthy mice paving the way for a better understanding of numerous diseases. 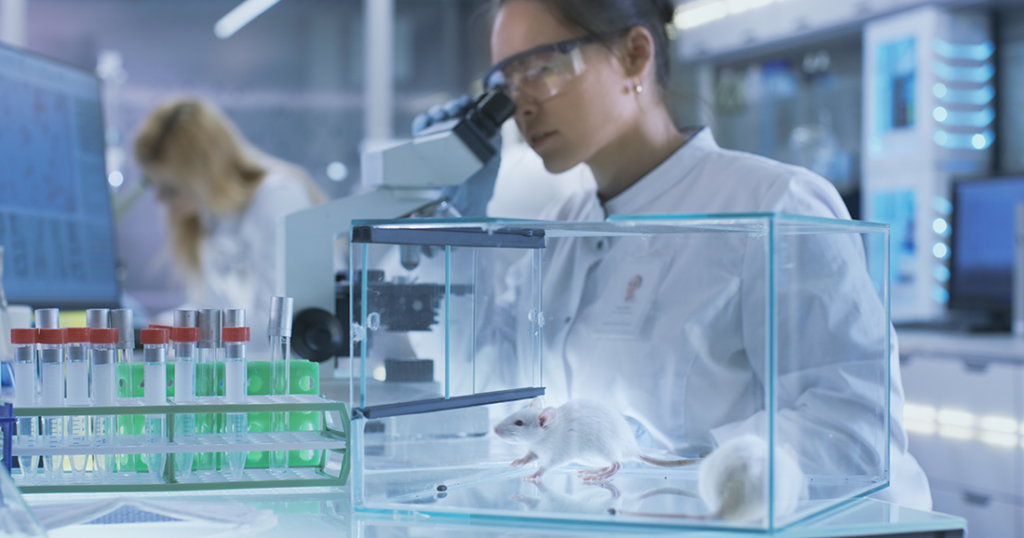 Animals that scientists have genetically modified in the past haven’t been able to reproduce. The problem is caused by a phenomenon known as genomic imprinting, in which molecules are normally bound to DNA and help control which genes are active or inactive. Experiments in the past that involved modifying the chromosomes of mammalian cells frequently disrupted the patterns of this genomic imprinting in mammalian cells. As a result, it was impossible to grow living animals from these cells.

Now researchers have successfully altered mice in a genetic modification experiment where chromosomes were fused. These mice with mixed and matched chromosomes were able to produce offspring with standard mice at a lower rate than typical lab mice.

This was the case despite the fact that they could only produce offspring with standard mice. This victory will have significant effects on research in the years to come.

The genetically modified mice could still pass on their fused chromosome to their rodent babies.

In mice, researchers have discovered a way to accelerate their evolution to a much greater degree than would typically be the case by skipping millions of years of natural selection. This could have repercussions on how we understand diseases and how we treat them, in addition to how we approach the study of evolution in general.

Synthetic biology is a relatively new scientific field focusing on constructing complex life from individualized DNA. This has been an aspiration of mine for a good number of years.

A group of scientists has successfully mixed and matched the chromosomes of different mammalian species, which would normally take millions of years for evolution to accomplish.

Explaining the science helps to understand what differentiates the way human and gorilla chromosomes have evolved.

The human genome has 23 pairs of chromosomes, and each parent contributes one complete set of 23 chromosomes to their offspring. Chromosomes exist in sets of two. In a healthy human, each cell contains 23 different sets of chromosomes (pairs),46 total chromosomes. Half comes from the father, while the first half is inherited from the mother.

On the other hand, the genome of a gorilla is composed of 24 pairs. This is because two separate sets of chromosomes in human ancestors merged into a single set, which did not occur in gorilla ancestors. Over the course of millions of years, the chromosomes in our bodies have been rearranged thanks to a process called chromosome fusion.

In primates, chromosomal rearrangements typically take place at a rate of approximately once every 1.6 million years. On the other hand, synthetic biologists are looking into ways to engineer these changes on a much shorter timescale, potentially even within the lifespan of humans. This may have significant repercussions for the future trajectory of the human race.

Now imagine being able to rearrange chromosomes in days within a lab, which would typically take 1.6 million years to happen naturally.

This is not a mere thought experiment. It is already happening. A recent article by Science.org headline states that any idiot can do it using a CRISPR genome editor. The question is, can people use this tool responsibly? The answer is that it depends. CRISPR is a tool that can be used for good or for bad, for example, for adding or editing genes in plants and animals or for creating designer babies.

In the past, scientists have utilized chemical agents and radiation to bring about significant alterations in chromosomes. However, synthetic biologists are now interested in developing a more accurate method that can be replicated when making these modifications.

In the new study, researchers from China led by Wang worked with mice, which typically have 20 pairs of chromosomes in their bodies. They experimented on embryonic stem cells extracted from mouse embryos that had not yet undergone fertilization; these embryos each had a singular set of chromosomes.

The researchers concluded that eliminating three imprinted regions in embryonic stem cells allowed them to successfully fuse chromosomes and enabled the cells to develop into embryos.

After making modifications to certain embryonic stem cells, the researchers injected them into the egg cells of mice. These egg cells eventually developed into embryos while being carried by surrogate mothers who were mice. The newborn mice each had only 19 pairs of chromosomes, which is one pair less than what is normally found in mice.

Although the pregnancy of a mouse lasts about three weeks, the genetic modification only took a few days to complete, which is orders of magnitude faster than actual evolution.

In one permutation of the experiment, the mouse cells behaved abnormally, resulting in the embryos passing away after only about 12 days of development.

In another permutation of the experiment, the mice pups that matured into adults that were larger, more anxious, and moved more slowly.

Instead of producing some kind of monstrous mutant animal, this method will be used to investigate how chromosomes progress over time in natural environments.

The chromosome fusion technology developed by Wang is an invaluable instrument for the field of synthetic biology. Wang is able to create new and unique chromosomes through the process of fusion, which can then be used to create new organisms with the characteristics that are desired. This technology has the potential to completely transform the field of synthetic biology and lead to the creation of extraordinary new forms of life.

To better understand diseases like infertility and childhood leukemia, which are both associated with chromosome abnormalities, Wang’s team may end up creating more mice with chromosome fusions. This may pave the way for the development of new treatments for these diseases.

In other research, mice have been used for some very interesting experiments with pretty astonishing results, such as anti-aging; who knows what scientists will come up with next?