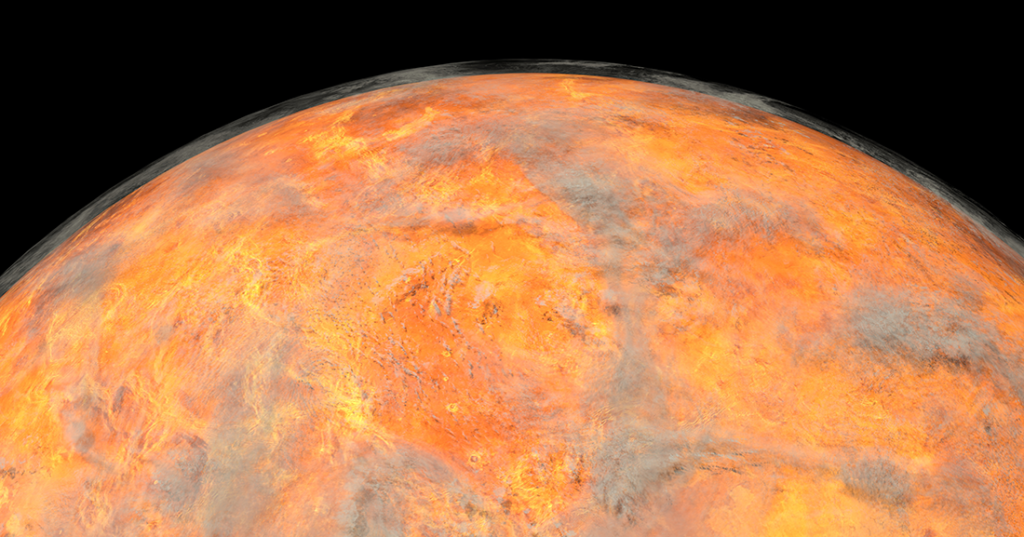 Astronomer Sean Jordan of the University of Cambridge recently published the results of a new study in Nature Communications. Based on these results, experts are starting to agree that there are no signs of life on Venus.

In this study, a group of scientists looked at how chemical reactions can be predicted based on the energy sources in Venus’s atmosphere.

The new investigative report in Nature Communications states no biomarkers indicative of airborne, sulfur-metabolizing life has been discovered. The information is a fresh, detailed investigation of the chemistry of Venus’ clouds.

Alien life or a planet with a sulfur-based metabolism?

People had hoped life could be a possible explanation for the presence of phosphine gas in the clouds of Venus. Still, after Jordan’s research team ran models, they found that it’s not a good explanation. But even if life doesn’t explain what they observe on Venus, there’s still a problem to solve: there’s a lot of strange chemistry to look into.

The idea of alien life in the clouds of Venus is not new. In fact, biophysicist Harold Morowitz and astronomer Carl Sagan came up with it in 1967, almost 50 years ago.

Scientists have recently said that the chemistry may hold clues and that life on Venus may have developed in the form of a sulfur-based metabolism living in Venus’ clouds, like microbes on Earth. Sulfur dioxide (SO2), a chemical made of sulfur, has an odd property on Venus: it is very common at lower altitudes but almost nonexistent at higher altitudes.

Paul Rimmer, an astronomer and chemist at the University of Cambridge has spent the last two years trying to figure out how to explain the strange sulfur chemistry found in Venus’ clouds.

The scientists conclude that no matter how strange Venus’s chemistry is, life as we know it isn’t very good at hiding itself unless it’s underground or in a cave or something.

Biological processes take components from their surroundings and release them back into them. A good example is a respiration: we humans inhale oxygen and exhale carbon dioxide. (Trees take CO2 and release oxygen, which is an excellent system.) There is no evidence yet that life on Venus is doing that.

Venus’s chemistry is very different from Earth’s. Its atmosphere is full of sulfur, with concentrations 100,000 times higher than on Earth. This sulfur is bound in molecules like sulfur dioxide, sulfuric acid, and carbonyl sulfide.

The scientists say they have looked at the sulfur-based ‘food’ accessible in Venus’s atmosphere — “it’s not anything you or I would want to eat, but it’s the primary energy source,” Jordan explains.

According to Jordan, if life consumes that food, we should see evidence of it in the form of specific molecules lost and gained in the atmosphere.

No life on Venus, but maybe it is the volcanic activity?

The peculiar sulfur dioxide signature piqued Jordan’s interest. The chemical is also formed by volcanic activity on Earth, and these researchers think that it’s probable that it’s the same on Venus.

Suppose animals with sulfur-based metabolism lived in Venus’s upper atmosphere; in that case, they could be blamed for the strange lack of sulfur dioxide at those altitudes.

Scientists have devised sulfur-based metabolisms that may hypothetically use chemical species found in Venus’ atmosphere. Jordan and his colleagues used these as a starting point to model the chemical reactions that would occur if those lifeforms were present to test if they produced the observed composition of the Venusian atmosphere.

They discovered that sulfur-metabolizing life may cause the observed sulfur dioxide depletion, but the metabolic processes of a biomass of the size necessary would produce other molecules in abundances that, in short, aren’t there.

It would shatter everything we know about Venus’s atmospheric chemistry if alien life was responsible for the SO2 levels we detect on Venus, explains Jordan.

Are Jordan and his team worried that the probe will prove them wrong?

The discovery of phosphine gas in the clouds of Venus remains an unresolved subject. Scientists don’t know how or why sulfur dioxide is sucked out of Venus’ upper atmosphere. It’s also feasible that a biosphere with an unknown metabolism exists. Jordan thinks that the findings will be pretty thrilling when a probe arrives to investigate.

The team claims that their research provides a foundation for simulating the effect of an aerial biosphere on other worlds and, as a result, searching for life in exoplanet atmospheres.

The team hopes to apply what they learned from the report to analyze the atmospheres of other exoplanetary systems.

Is this scientific hypothesis correct about life being improbable on Venus?

Michelle Starr writing for sciencealert.com, thinks that the main scientific view will likely agree with the findings of Jordan’s report regarding life on Venus until we acquire new information.

In 2026 any doubts surrounding the views asserted by Jordan in this new report may be put to rest. Rocket Lab, a California-based startup, will deploy a probe in 2023 as a preparatory mission to seek life on Venus in 2026.