Two stars in the WR 140 system are orbiting around each other in ovals rather than circles and rapidly losing mass, but what exactly are they, and why are astronomers so highly interested in this never before seen space phenomenon? 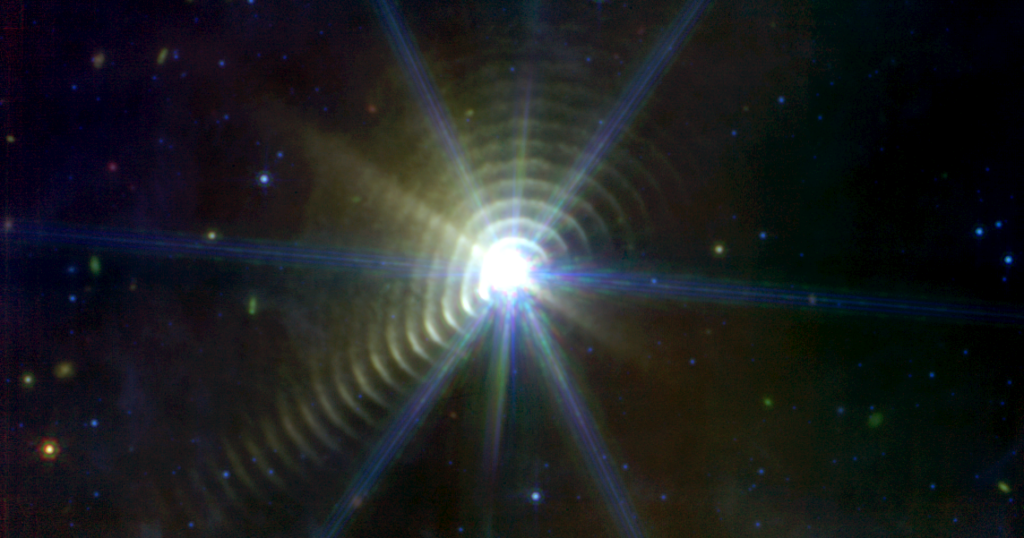 The Institute of Space and Astronautical Science at the Japan Aerospace Exploration Agency, led by Ryn Lau, requested the James Webb Space Telescope to observe an object in space called WR 140. The institute is currently writing a paper about its observations of it. Michelle Starr, a prominent writer for ScienceAlert.com, speculates that we could be on the verge of discovering something new about WR 140.

Michelle Starr describes the images of WR 140 as one of the clearest images we have ever seen of one of the many marvels found throughout the cosmos.

In question is a star located approximately 5,600 light years away. The infrared eye of JWST has picked up on an extraordinary detail: the star is surrounded by what seems to be concentric rings of light radiating outward.

Describing the image of WR 140, Starr states that even though Webb’s signature diffraction spikes are not “real,” the concentric rings are real, and there is a wonderful and fascinating explanation for why they appear as they do.

Their interactions cause precise periodic dust eruptions in space that expand out in shells into the space around them as time passes.

Not one star but two!

WR 140 is actually a binary pair of rare stars in the Cygnus constellation.

Because dust shells from WR 140 emit infrared light, a sensitive instrument like Webb’s MIRI was able to capture them in exquisite detail. This was made possible by the dust’s ability to glow.

Why is WR 140 called a “Colliding-wind binary?“

WR 140 is known as a colliding wind binary, and it is composed of a Wolf-Rayet star with the designation WR 140 and a companion star of the O-type that is both massive and hot. Both of these objects are extremely rare.

WR 140 is losing mass at an extremely rapid rate

Wolf-Rayet stars are incredibly luminous, extremely hot, and extremely old; they have reached the end of their lifespan in the main sequence. They are deficient in hydrogen but abundant in nitrogen or carbon, and they are losing mass at an extremely rapid rate.

O-type stars are some of the most massive stars known; in addition to being extremely hot and brilliant, their lifespans are extremely short because they are so enormous.

The stars that make up the WR 140 system have strong stellar winds that travel at a speed of approximately 1,864 miles (3,000 kilometers) per second out into space. Because of this, both are rapidly shedding their respective amounts of mass. Both stars appear to be behaving in a normal manner.

The stars orbit around each other in ovals rather than circles

What happens when star winds collide?

When the two stars reach a distance known as periastron, which is approximately a third greater than the distance that separates Earth and the Sun, they draw near enough to one another for their powerful winds to collide.

This causes shock waves to be transmitted through the material surrounding the stars, which speeds up particles and creates high-energy radiation such as X-rays. As the material being carried by the colliding stellar winds cools, dust formation can be caused as a result of these winds colliding.

Dust is a form of carbon capable of absorbing the ultraviolet light produced by the two stars. This warms the dust, which causes it to re-emit thermal radiation, which is what the JWST sees in infrared wavelengths.

The stellar wind pushes the dust in a direction away from the star, which causes an expansion of the partial dust shells. When blown outward, they lose both their heat and density as they expand and cool.

Because the binary star’s orbit has a period of 7.94 years, the collision of the wind and the production of dust happens once every 7.94 years. This indicates that the age of the outermost visible dust shell can be determined by counting the rings of the nebula that surround the binary, similar to how tree rings are counted.

There are approximately 20 rings that can be seen, which indicates that the image obtained by JWST contains about 160 years’ worth of dust shells. This is relatively recent in space-time. Michelle Starr writes that 2016 marked the year that saw the most recent observation of the WR 140 periastron.

What next exciting thing could be revealed by the Japanese report on WR 140? Astronomers will no doubt be waiting in excited anticipation as more amazing facts about WR 140 get shared.