The upcoming generation of stealth bombers from Russia, China, and the United States will increase their stealth capabilities and make them virtually undetectable. 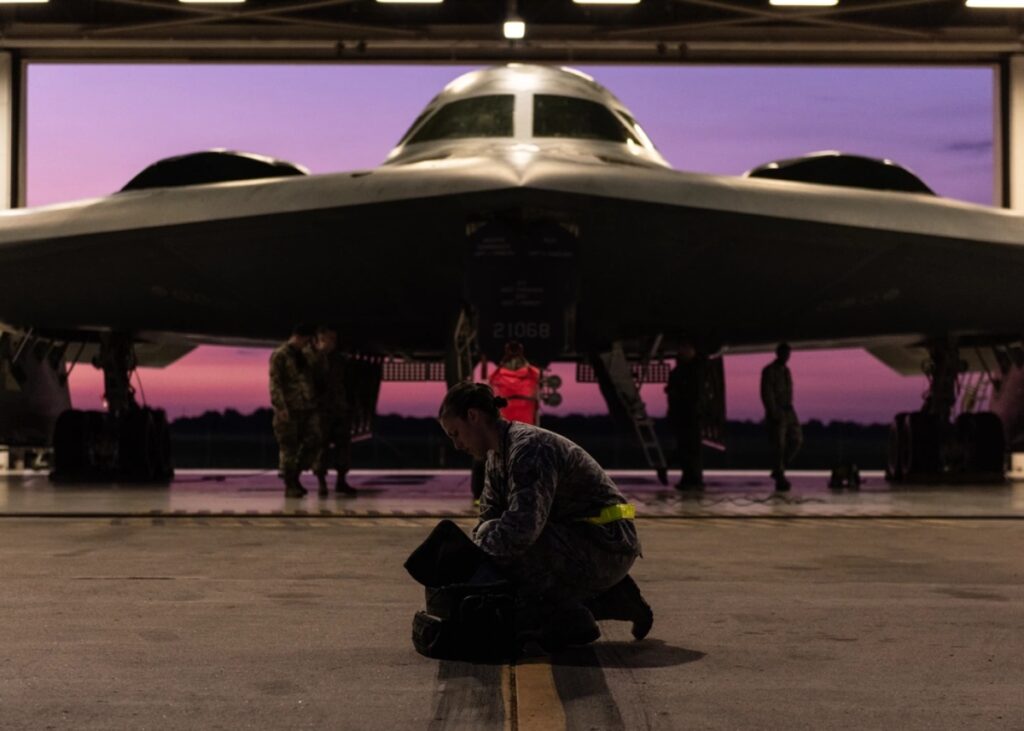 Stealth bombers are the newest and most advanced type of aircraft of the top global military powers… And the US, China, and Russia are investing heavily in these new warplanes, as they constitute a significant deterrent and offer a massive advantage on battlefields.

The Stealth bomber technology is still in relative infancy. Still, it is clear that America, China, and Russia are committed to making them a crucial part of their military arsenal – and this new arms race could have significant implications for the future of warfare.

Conventional bombers are simply large aircraft that fly at high altitudes and drop their massive array of bombs on targets.

They are really effective at wreaking havoc, and they have destroyed entire cities with their incredible power… But they are also vulnerable to detection and attacks from SAM missile batteries and fighter-interceptor aircraft.

On the other hand, stealth bombers are equally destructive. They are designed to avoid detection, making them potentially deadlier as they are much harder to spot because of their low radar signature. For example, the B-2 Spirit, with its massive wingspan of 172 ft (52 m), appears on the radar as a large bird.

The main difference is that they carry their payloads internally, reducing their vulnerability. So, stealth bombers offer a significant advantage in terms of secrecy and surprise.

Known as the H-20, this Chinese bomber is designed to evade detection by infrared sensors, radar, and other forms of electronic warfare.

It was developed by the China Aerospace Science and Technology Corporation (CASC) and is expected to enter service in 2025. However, the Chinese government hasn’t disclosed the program details.

Reports suggest the H-20 will be a long-range bomber capable of carrying nuclear weapons. Additionally, it will fly at very high altitudes and will likely incorporate features such as a low-noise propulsion system and radar-absorbent materials.

So #Russia starts construction of PAK DA fifth gen stealth bomber. Construction of fist platform to be completed by 2021.
It will have an operational range of 12000 km and carry 30T of weapons. pic.twitter.com/w5FTcWMMga

The PAK DA is a Russian stealth bomber currently in development. The warplane is designed to be highly stealthy, armed with long-range precision weapons, and able to penetrate enemy airspace to deliver its payload.

The PAK DA is being developed by the Russian aerospace company Tupolev. When completed, the PAK DA will be one of the most advanced stealth bombers in the world, and it will give Russia a significant military deterrent against the US and European countries.

This bomber will likely incorporate many of the same stealth features as the H-20, including a low-noise propulsion system, radar-absorbent materials, and nuclear striking capacity.

However, it is still in the early stages of development, and the Russian military industry is not famous for its speed in producing aircraft. So, it can take decades before they mass-produce this bomber.

The US is also developing a new Stealth bomber: the B-21 Raider

America already has a stealth bomber in service, known as the B-2 Spirit. But, it is rapidly developing a new generation of Stealth bombers with more capacities and cutting-edge technologies.

The B-21 Raider is a next-generation stealth bomber designed to be highly survivable and able to penetrate deep into enemy territory. The B-21 Raider is being developed by Northrop Grumman and is expected to enter service in the mid-2020s at the earliest.

Also, it will be capable of carrying both conventional and nuclear weapons, giving the Air Force a versatile platform for striking targets anywhere in the world.

The B-21 will replace the aging B-52 Stratofortress as the Air Force’s primary long-range bomber.

When it enters service, the B-21 will give the US Air Force a critical new capability that will ensure its dominance of the skies for decades to come.

These stealth bombers will take aerial warfare to the next level

Stealth bombers are a relatively new type of aircraft and are still being developed by the US, China, and Russia.

While Russia does not manufacture aircraft that often due to budget constraints, China is fully engaged in this arms race, and the United States wants to take the lead with the B-21.

And indeed, the B-21 design will shape the design of future bombers for the rest of the 21st century.