A psychology study on beauty investments shows no difference between men and women on the amount of time spent caring for their appearance. 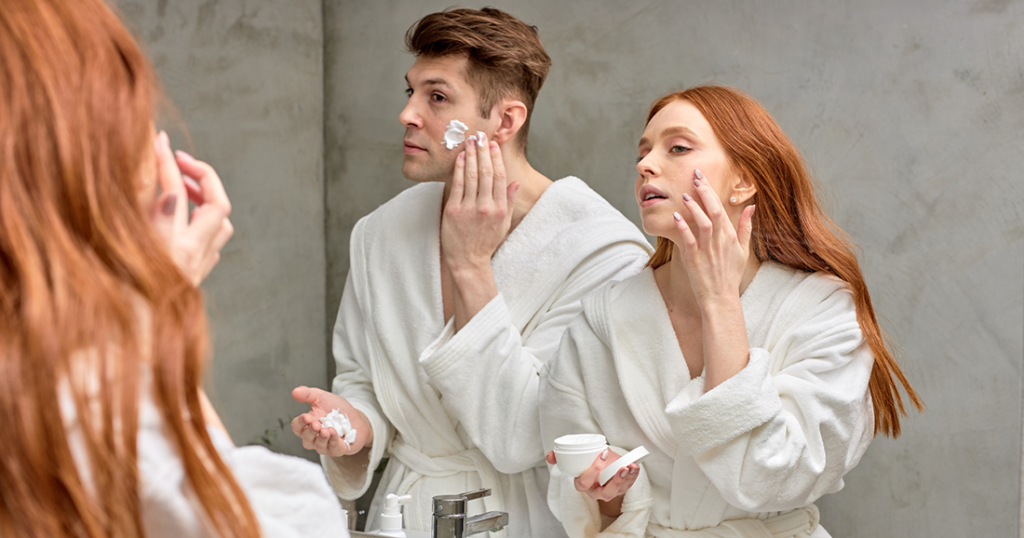 We all are used to the widely believed perception that women typically take more time to get ready before heading out. While there may be some truth to this because it’s based on our own real-life observations, it may not be entirely accurate and doesn’t reflect the actual truth.

However, with the never-ending argument, ‘who spends more time on beauty enhancements?’ It’s important to look at the issue from a scientific standpoint. If not for anything, but to have an unbiased view of the general belief. These were some of the thoughts of Marta Kowal and Piotr Sorokowski, which led them to conduct the research, which was published in Environmental Research and Public Health on 24th March 2022.

Society conditions women to invest more time in cosmetic use to maintain or improve their beauty. On the other hand, the typical male will spend comparably more time exercising and weightlifting to enhance their masculinity. We often fail to acknowledge that this can be attributed to the men’s need to improve their physical attractiveness.

Scientific analysis of beauty investments for both genders

The researchers chose a 2- step study process to arrive at a result. This model improves accuracy and removes a lot of ambiguity relating to the underlying subject. At any rate, both studies involved examining how men and women invest in their looks and how much time both sexes invest in improving their appearances.

The researchers implemented qualitative analysis models on 121 candidates between 18-49 years old for the first study. They were asked two open-ended questions, ‘what do people do to improve their physical attractiveness?’ and ‘how do you enhance the way you look?’ The answers were evaluated and streamlined to the eight most common beauty-enhancing behaviors. These behaviors were makeup use, cosmetic use, hand grooming, body cleaning, mirror-checking, strength training, cardio, and hair grooming. Perhaps these findings are needed to prove that men invest as much in beauty as women.

The second study involved 62 candidates between 20-67 years old. The researchers asked them to record their beauty-enhancing routines in an online diary for seven days. The candidates made at least three entries daily, including the demographic information (age, sex, and education) recorded on day 1. Then fifty-four percent of the candidates proffered answers to the questions asked throughout the seven days.

The second study participants also went through the Narcissistic Personality Inventory-13 test to establish their perception of physical attractiveness and evaluate their daily commitment to improving their appearance. Following the eight types of beauty-enhancing behaviors shown by candidates in the first study, the researchers developed an appearance-improving scale containing eight questions to assess the beauty-enhancing behaviors. Questions like the amount of time (from 1 minute to 6 hours) were pivotal in getting a final resolution.

Importance of the study

In an interview with Psypost, Marta Kowal made us understand that the research establishes the fact that there are different ways to a good look for each sex.

In the same manner, when the definition of beauty-enhancing behaviors is niched down to the activities stereotypically perceived as feminine, women will appear to invest more time in improving their appearance. However, when we take a holistic view and include the stereotypically masculine activities, we can observe that the difference in time invested is very minimal and sometimes disappears.

Potential limitations of the study

“Even though our study may seem to refute evolutionary psychology notions – which, oversimplifying, state that women should be more interested in enhancing their physical attractiveness due to, inter alia, different mating strategies – it is not necessarily irreconcilable. Says Marta Kowal, “We observed that men are interested in looking attractive mainly via improving their prowess, strength, and agility, which is very much in line with the evolutionary perspective. After all, our male ancestors who possessed these features could have had higher fitness outcomes.” She added.

Regarding possible limitations, Kowal was quick to point out that the study is innovative, more so, as it employs a diary design for its evaluations. The sample size is more or less insufficient to draw a general conclusion.

Of course, this is largely expected because it took ages to arrive at the perception that women spend more time on appearance in the first place.

Overall, we expect further studies with a larger sample size to follow. Perhaps, the currently ongoing research by the team on physical-enhancing behaviors will be the solution. According to Kowal, in the ongoing research, her team has recruited 107,715 participants from 175 countries. We will keep an eye out for when they publish the results and update you accordingly.