A Colossal Sunspot Grew Twofold in the Last 24 Hours; Could Hurl a Massive Solar Flare at Earth

Sunspots are common. Why are astronomers so concerned about this most recent sunspot dubbed "AR3038?" 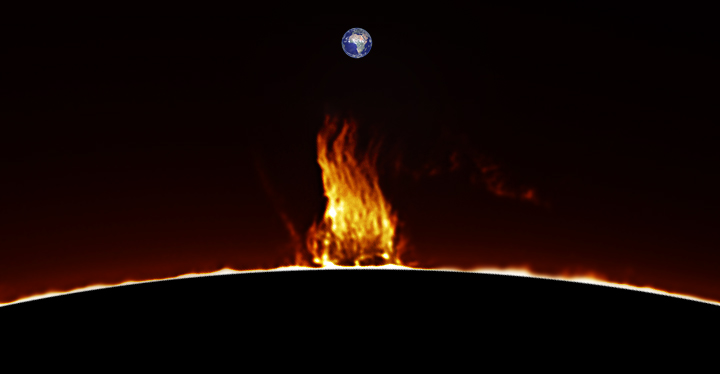 Sunspots are black patches on the sun’s surface that emit powerful bursts of energy. What happens when an already massive sunspot quadruples in size in just 24 hours and faces Earth? This is the situation that we are now facing.

AR3038 is the name of a sunspot that has lately grown in size. Astronomers have been observing AR3038 for years, and it has become enormous. According to the website SpaceWeather.com, in just 24 hours, this already massive sunspot has doubled in size. On Sunday, NASA’s Solar Dynamics Observatory footage observed how the sunspot has twisted and contorted over the last day.

Sunspots seem dark as they aren’t as hot as other portions of the sun’s surface. This is because they form over areas where the sun’s magnetic fields are powerful. These strong magnetic fields prevent some heat within the sun from reaching its surface.

Tangled magnetic fields can reconfigure themselves at any time. When this happens, a solar flare occurs, a quick explosion of light and radiation from the sun.

A solar flare won’t engulf the Earth with fire; even a huge plasma ball projected at the Earth on April the 14th, 2022, which was hundreds of millions of cubic miles, didn’t harm us given the distance of the Sun from the Earth. Still, solar flares depending on their power, can potentially impair Earth’s radio communication networks and navigation systems because of their magnetic activity and radiation. Ed Browne, writing for newsweek.com, states that such flares are extremely rare, occurring less than once every 11 years, roughly the duration of a solar cycle.

One notable solar flare event in the past was the Carrington Event, named after Richard Carrington, an astronomer who witnessed it. The Carrington Event was a solar storm in early September 1859, just a few months before the 1860 solar maximum. In August of 1859, astronomers worldwide watched as the number of sunspots increased.

The Carrington event-triggered auroral displays that were seen worldwide and sparked fires in many telegraph stations. Today, a Carrington-like event would devastate electrical systems, satellites, and wireless communication. A solar flare in 1972 knocked off long-distance telephone cables in Illinois. In 1989, a flare caused a blackout of most of Quebec province, leaving around 6 million people without power for nine hours.

According to the NOAA (National Oceanic and Atmospheric Administration), a solar storm the size of the Carrington Event could severely damage satellites, disrupt communications via phone, radio, and television, and trigger electricity blackouts. An occurrence like this is thought to happen once every 500 years.

The current status of the AR3038 magnetic field is that it might potentially hurl an M-class solar flare toward Earth, which is the second-strongest type.

M-class flares are only known to cause modest radio blackouts. An M9 flare, the most powerful of the M-class, could disrupt radio communications for tens of minutes in afflicted portions of the Earth and degrade low-frequency navigation signals. Flares of the M-class are also common.

If AR3038 continues to grow unpredictably, it could potentially cause an X-class flare and a Carrington-type event. Flares of the X-class are the most powerful. The X-class flares, which are less common, can create more serious problems. For example, an X20 flare would induce a complete high-frequency radio blackout on Earth’s daytime side for several hours, preventing boats and planes from using navigation signals.

The Space Weather Prediction Center (SWPC) of the National Oceanic and Atmospheric Administration has not issued any solar flare alerts yet. Still, astronomers, utility providers, airlines, maritime, and many other businesses will be watching nervously how developments of AR3038 unfold.