Train Your Body Like Wim Hof To Survive Extreme Cold, And Possibly Even Extreme Heat 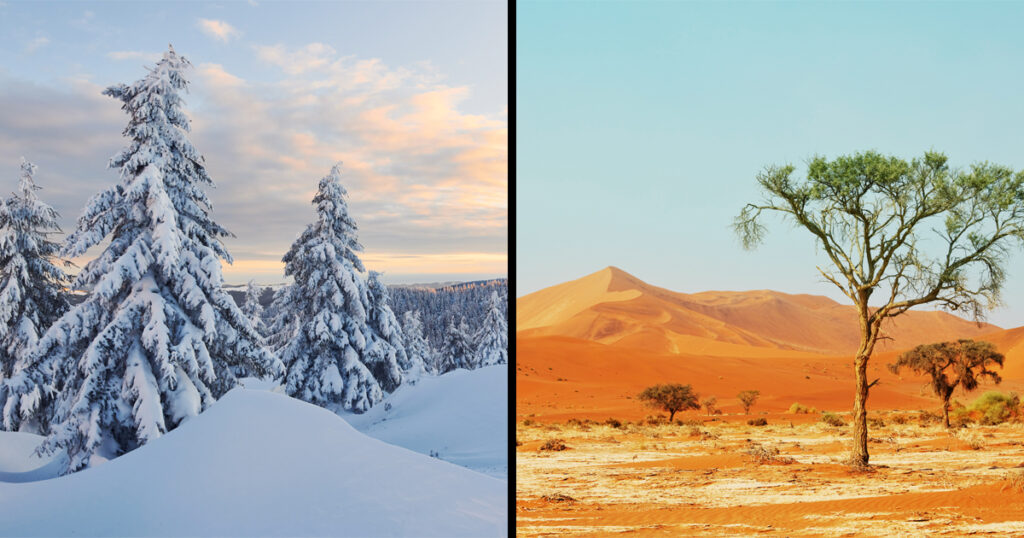 We’ve all been there, one moment you’re lying in bed comfortably wrapped up in a cocoon of blankets, blissfully warm and peaceful. Then the next your alarm goes off and before you know it you’re trudging through another cold winter morning to go work eight hours at a job you hate, trying not to think about the fact that you’ll be repeating this routine tomorrow, and every day after that. Until you die.

Or maybe you’re stuck in the dog days of summer, in the midst of another record-breaking heat wave because global warming is definitely not real, and panting desperately trying to fan yourself and find some relief.

Truth is, most people would rather live our lives in a comfortably room-temperature world of seventy degrees Fahrenheit, but our reality routinely puts up against the bitter elements, extreme cold or extreme heat. If you live somewhere insane like Australia, you get both- plus every animal there can kill you, in both hot and cold.

But what if you could train yourself to resist the effects of extreme temperatures like Wim Hof did? We’ve all read about modern supermen, with the power to withstand extreme heat or extreme cold and do things that would seem like they’d kill just about any other person alive. What about you though, the average Joe?

Can you realistically train your body to survive extreme cold?

Wim Hof is a dutch man known as an extremophile, and has earned the nickname “The Iceman”. Since he was a teenager Wim Hof has been routinely subjecting himself to extreme cold, and he’s learned not only to love it, but thrive in it. He’s completed several marathons completely barefoot in the Arctic Circle, once spent over an hour swimming under ice, and has hiked almost the entire height of Mount Everest wearing only shorts.

Yet Wim Hof is definitely not immune to the effects of the cold, as a matter of fact during his first attempt to set a record for swimming under ice, he had to be rescued by a diver after his cornea began to freeze. Yes, you heard that correctly- corneas can apparently freeze, and all that did was slow Wim Hof down. He beat the record the very next day. So then how does he do these incredible feats?

Wim Hof is well known, and often criticized, for marketing what he terms the Wim Hof method. While reviews are mixed, the method is fairly simple and consists of engaging in regular meditation and elaborate breathing exercises. According to the method, you first begin with thirty cycles of breathing meant to induce controlled hyperventilation.

You inhale filling the lungs completely, which means starting your breath down in the stomach and slowly expanding your lungs upwards. Then you release the breath, but without actually exhaling- instead, you let the pressure in your lungs force air out, before inhaling again.

Once you’ve mastered thirty cycles of controlled hyperventilation, you then focus on controlling your body’s response to being deprived of oxygen. You do this by taking deep breaths in, holding it in briefly, and then completely expelling all the air out of your lungs. With empty lungs, you then resist the urge to breathe in as long as possible.

You might feel yourself drifting into an oxygen-deprivation panic, but if you can hold out long enough you’ll actually eventually receive a boost of oxygen as your liver releases oxygen-rich blood that it keeps stored for emergencies like this. Freedivers who swim without oxygen often practice hitting this point, and warn that the hardest part is simply keeping your cool and not freaking out.

The third step is to then work on your breath retention. After mastering the complete exhalation exercise, you then repeat, and when your urges to breathe get incredibly strong, you then take a full, deep breath in and hold it for 15-20 seconds. Altogether, a complete workout should include three consecutive rounds of all three steps, and this Wim Hof claims will help you master your ability to resist the effects of the cold.

Does it actually work?

Well, surprisingly, yes, it does. Scientists have discovered that resisting the effects of cold is more to do with your own mental perception and willpower rather than anything biological. Studies on people who have learned to resist the cold show that their core body temperature remains pretty much the same as a regular person’s, it’s simply their perception of cold that’s different. For them, the same cold that sends you scurrying into a pile of blankets is merely a light breeze.

Of course, biology does help though, and scientists have also found that individuals who regularly expose themselves to extreme cold actually develop fat deposits known as brown fat. This is the same type of fat you had as a baby, and is largely to thank for your chubby, cute appearance as a newborn.

Babies are pretty terrible about keeping body heat in, so the body is able to burn this fat much more efficiently than regular fat, which helps keep it warm. If you regularly expose yourself to extreme cold, you too can hack your body into believing it needs to generate this type of fat deposits, and in turn, they will help keep you warm.

The trick though of course is to undergo what extremophiles term acclimatization, or the process of gradually increasing exposure to extreme cold. Sorry, but eating a bunch of donuts on the couch isn’t going to get you the precious brown fat you need for your underwear-only trip to the north pole- it’s just going to get you regular fat.

How do you acclimate to extreme cold?

First, start with your willpower, because if you don’t have much of it you’ll never get used to the cold. You can start though by regularly immersing yourself in cold water. In South Korea there is a community of women free divers who regularly dive for pearls in the freezing ocean, wearing nothing more than a cotton suit. Women of all ages engage in this diving, even women as old as 90.

The regular exposure to cold water has toughened up the women to the effects of cold on their bodies, and the good news is that you too can be made as tough as a Korean granny. You can start by taking a shower every morning, which you should already be doing, only now you’ll be doing it with only cold water.

Start by exposing yourself for thirty seconds at the end of a nice hot shower, then gradually increase the amount of time until eventually, you’re taking full-on cold showers. You’ll be well on your way to hiking through Antarctica in your birthday suit and you’ll save a fortune on your water bill- that’s a double-win.

If you live somewhere with snow, then it’s time to kick it up a notch. The Antarctic explorer H.R. Bowers was well known for stripping completely naked every morning and dumping buckets of cold water and slush over himself. You however can start with a Wim Hof technique often called “snow laying”, and you guessed it, it’s as simple as laying on snow wearing as little as possible.

Just like the shower, regularly increase the amount of time you spend exposed to the snow. If you’re not somewhere snowbound though, then you can replicate this by filling a tub full of ice and sliding in. The longer you can stay in the closer you’ll be to calling yourself a proper Iceman.

Pretty soon you’ll be toasting cokes with polar bears wearing nothing but sandals, though we should warn you that sudden exposure to extreme cold does come at the risk of a heart attack- so make sure you’re in decent health before you attempt any of this and consult a doctor.

Also, Coca-Cola lies and polar bears will 100% eat you on sight, though luckily for you they’ll all be dead from global warming soon. We’ve now conquered one half of the planet, wearing nothing but Duck Tales themed boxers and a smile-

What about extreme heat?

For heating we are turning to one of our own wilderness survival gurus who’s had regular experience in desert environments with temperatures well above 100 degrees Fahrenheit- or whatever people who never landed on the moon measure with. Just kidding, we really all should be using a single measuring system, and it’s kind of silly we don’t.

Anyways, tolerating heat is also a mental affair, though unlike the cold, the body actually comes first. In extreme temperatures the body attempts to cool itself off by sweating profusely, the water acting as a radiating fluid which more easily enables heat to transfer from your body to the ambient air.

That little trick by the way is what made humans the top species on earth- while other animals were killing prey with sharp claws and fangs, we simply ran our prey to death, and typically did so during the hottest times of the day when animals who can’t sweat or sweat very poorly, were most vulnerable to dying of overheating. Meanwhile, our awesome sweat glands pumped away the entire time, keeping us from dying as we chased our prey for miles at a time.

Why being hydrated is key?

But the real reason why our ancient ancestors didn’t keel over dead from the heat, and so many modern suburban Spartan-challenge-try-outs do, has to do with water. We investigated this issue carefully, and discovered that top scientists have learned that sweat consists mainly of water. So if you aren’t properly hydrated, your body isn’t going to have much moisture to work with and help vent deadly heat being generated within your body.

Of course, your body needs water for pretty much anything it does though, so the real trick to surviving extreme heat, is to simply stay hydrated. Incredibly you can lose as much as a liter of water per hour in a hot environment if engaged in strenuous activity, and considering that most doctors recommend you drink 1.5 to 2 liters of water every day during normal activity, you can quickly see what the problem is.

The trick is going to be to keep consuming water during your time in the heat, with our desert guru recommending you drink at least eight liters a day the entire time you’re in extreme heat.

You’ll want to consume this water at a moderate pace, however, as extreme heat can make the stomach quite sensitive, and drinking too much water at once could actually lead you to vomit, and unless you enjoy eating vomit, you’re going to be losing out on precious liters of water.

Instead just pace yourself as you drink, taking frequent sips. If you’re out in extreme heat for a long time though then water alone will eventually not be enough, and you’ll need to replace precious minerals such as potassium.

Due to sugars and other ingredients, your body doesn’t need unless, under extreme stress, sports drinks are terrible to drink if you’re just sitting on the couch all day doing nothing more than watching TV.

Adding sports drinks to your hydration routine in extreme heat will keep you in tip-top shape, and as long as you protect your exposed skin from the sun, there’s really no limit to how long you can tolerate even scorching temperatures. Maintaining hydration is key, though overhydrating can also be deadly and lead to a condition known as water intoxication.

Don’t worry though, that’s pretty rare and your body will pretty readily warn you of this condition- though if you’re truly in the middle of record-setting heat, there’s little risk of this happening.