Why Did T-Rex Have Such Feeble Arms? Paleontologists Finally Have an Answer

For almost two centuries, paleontologists have tried to find an answer to the pygmy nature of the T-Rex's arms. 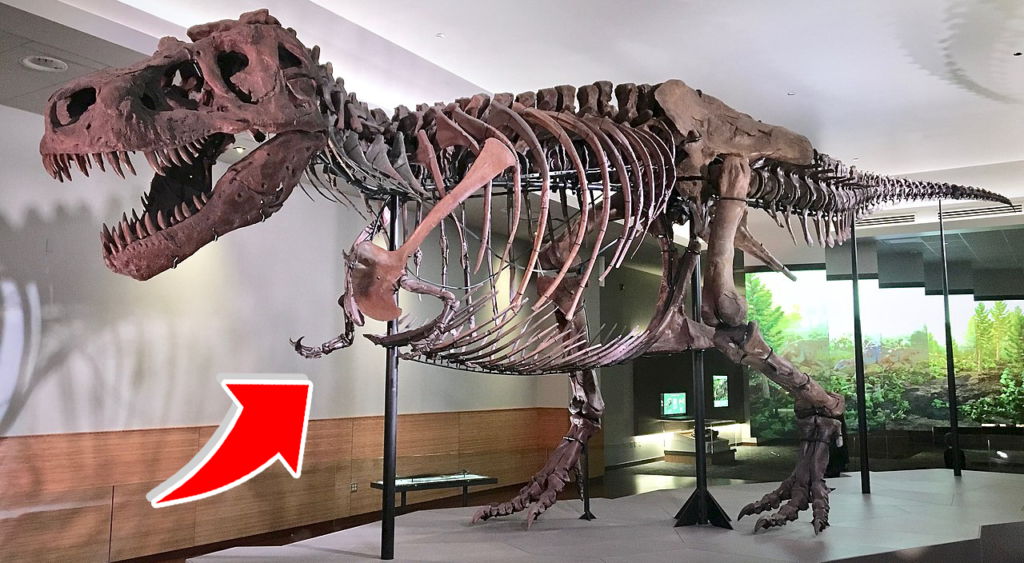 If you claim to be no stranger to ‘Jurassic Park,’ you surely should know the Tyrannosaurus Rex or, as commonly called ‘T-Rex’. One of the somewhat odd features of this archosaur is the presence of relatively small arms compared to other classic predators paleontologists studied over the years. Although the huge jaws with a head that stretches up to five feet more than makes up for the shorter limbs, it’s something we can’t overlook when analyzing the body of a T-Rex.

While that’s the case, we might see a Tyrannosaurus Rex as a dinosaur with puny arms simply because of the body-to-arm length ratio. The wingspan of a man is about two inches longer than his height, while that of a woman measures half an inch longer than her height. Now comparing these stats to the arms of a T-Rex that’s 12 feet tall with a length of 45 feet, we can perhaps say this predator has got a puny arm as it stretches only three feet in length. More so, if we were to assume the arms of a T-Rex relative to our body size, they’ll only be five inches long, measured from the shoulder.

Now the pygmy nature of the T-Rex; is it an evolution or just a mere disability? For decades, paleontologists studying the T-Rex have continued to search for answers to this question. In 1902, Barnum Brown, the greatest dinosaur collector, was the first to discover a complete T-Rex skeleton at Hell Greek, Montana. Since then, the T- Rex’s puny are has been the center of many dinosaur jokes, including the vintage cartoon Toy Story where Rex suffered from anxiety.

The Padian hypothesis vs. other speculations

In an interview, Kelvin Padian, an evolutionary biologist at the University of California Berkley, suggested that the T- Rex’s small arms result from evolution for survival. They probably fought and fed on carcasses together. According to Radian’s hypothesis, the short arms are designed to avoid fatal bites from the powerful jaws of fellow dinosaurs while feeding together or during a fight.

Kelvin Padian also claims that this evolution may have shaped species from the cretaceous times. Given that animals like the carcharodontosaurids were bigger than the T-Rex, it makes sense to trust the hypothesis to some extent. Also, T-Rexes hunt I pack, adding more solidity to his hypothesis.

Although his hypothesis is the most logical, there are a couple of other variations that are worth mentioning:

At any rate, making speculations on an animal that went extinct over 60 million years ago, more often than not, will result in an endless loop for paleontologists.

Comparing the T-Rex to other species

A case to study is the development of tyrannosauroids; T-Rexes possessed more predatory features than their predecessors, with bigger skulls and jaws. One can conveniently assume that the specie traded the size of their forelimbs for more predatory power as it was a liability. For example, the Dilong paradoxus is the oldest tyrannosauroid on record; they were much smaller, and their arms measured at least more than their feet’ length.

Also, if we consider the Albertosaurus of the late cretaceous period, we see a pattern as they had much smaller arms according to the body-to-arm length ratio.

Other dinosaurs that hunted in packs like the Deinonychus and the Utahraptor seem to possess relatively longer or normal arm lengths. However, there are some excuses because their arms are armed with sharp claws that can be used to rip prey and defend if needed. More so, they are expected to have a relatively smaller bite force compared to the jaws of a T-Rex.

We may never know for sure

For almost two centennials, paleontologists have tried to find an answer to the pygmy nature of the T-Rex’s arms; and the piece of the puzzle for most has been evolution.

It is believed that the T-Rex evolved, losing both arm length and mobility to improve social signaling in attracting a mate, stabbing during a fight, holding prey, or holding a mate during sex. However, Padian considers the last function as improbable because the arms would be too small to hold down another T-Rex of fairly the same as its size.

In his interview, Padian concluded that the ideas put forward by past and present paleontologists are mere hypotheses, and none of them gives a justifiable reason why the arm became smaller; rather, they only emphasize why the size remained unchanged. At any rate, the proposed functions of the arms would have been much easier if they were much longer.