Why the Tiny Indestructible Tardigrade Is So Fascinating for Space Agencies 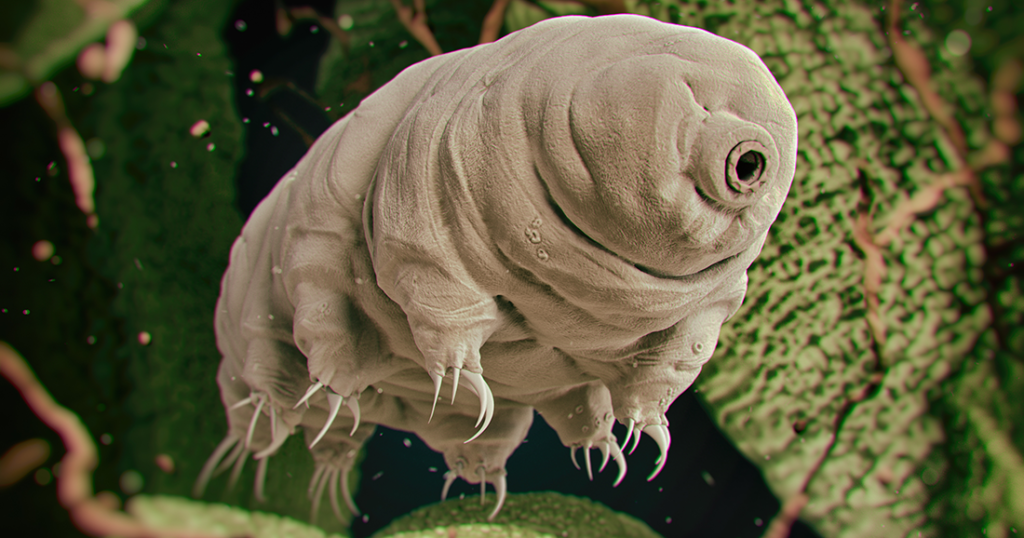 SpaceX could learn a thing or two from invertebrates like tardigrades. About the size of a dust mite, the tiny tardigrade is the most formidable animal on Earth. It can withstand temperatures as low as -272° Celsius, the vacuum of space, and 500 times the amount of X-rays that would kill a person.

Even though lightweight SpaceX space suits make astronauts look like Marvel heroes, if astronauts want to survive the harsh conditions of space, they should learn from tardigrades. In September 2007, during the European Space Agency‘s FOTON-M3 mission, tardigrades were able to survive ten days of exposure to open space with only their natural protection.

Since the 2007 test, space agencies have been extremely curious about tardigrades. There is even a mission being planned right now to send tardigrades into interstellar space using massive lasers and spacecraft the size of a human hand.

If a human were to try to go into open space without a spacesuit, they would pass out after about 15 seconds. After 90 seconds of exposure, they’d die from asphyxiation, depending on where in space a person would eventually freeze solid or be burnt to a crisp. However, this wouldn’t necessarily happen to a tardigrade that can also survive extreme temperatures.

Tardigrades were not the first animal to travel to space.

Some people may remember a squirrel monkey called Miss Baker who went into space in 1959. Other people may believe it was a dog named Laika aboard the Soviet spacecraft Sputnik who was the first animal in space in November 1957.

The first animals launched into space in 1947 were, in fact, fruit flies, and it was also a monkey called Albert II, who was the first monkey in space on June 4, 1949, and not the famous Miss Baker. This is not a reference to the only other famous Albert II, the prince of Monaco born in 1958, nine years after the monkey had become famous.

The tardigrades made history in space in 2007 as the first animal to live and survive in open space; if you count surviving ten days count as surviving when other animals and humans would die almost instantly. It’s unknown whether NASA and other space agencies have given their tardigrade astronauts regal-sounding names. Still, nonetheless, tardigrades are making a significant contribution to space science.

What is so special about them?

Tardigrades might not be bestowed with regal-sounding names by NASA, but they do have a reputation for being practically indestructible and have really adapted well to extreme environments. They live in places like moss and water and look a little bit like bears. A tardigrade’s damp, mossy home can dry out many times a year. For most living things, drying out is pretty bad news. It hurts cells in ways cold, lacking oxygen, and radiation dose.

One thing is that drying causes a lot of peroxides and other types of reactive oxygen species to form. Like radiation, these dangerous molecules break up a cell’s DNA into small pieces. Cell membranes also get wrinkled and broken when they dry out. And it can make fragile proteins unfold, which is the same as crumpling them up and making them useless. Tardigrades have learned how to deal with this kind of damage uniquely.

What happens when a tardigrade dries out?

Tardigrades’ unique ability to survive comes from their ability to adapt when their cells dry out. Drying tardigrade cells show proteins that cross each other. As a tardigrade loses water, its cells make long, crisscrossing proteins that protect and cushion the membranes of the cells.

They can create a special damage suppressor protein

When a tardigrade dries out, its cells release abnormal proteins that aren’t found in other animals. In water, proteins are loose and don’t have any shape. But when the water goes away, the proteins form into long, tangled fibers that fill the inside of the cell. Like Styrofoam packing peanuts, the fibers support the cell’s membranes and proteins, keeping them from breaking or unraveling.

At least two types of tardigrades also make a protein that no animal on Earth can make. This protein, called Dsup, stands for “damage suppressor,” binds to DNA and may protect it from harmful forms of oxygen.

They could help insects and crops last longer in space

Imitating tardigrades could help people live in space one day. Food crops, yeast, and insects could be made to make proteins from them. This would allow these organisms grow better on spacecraft, where radiation levels are higher than on Earth.

Scientists have already put the gene for the Dup protein into human cells in the lab. Many of these changed cells could survive levels of X-rays or peroxide chemicals that kill normal cells. And when the gene for Dsup was put into tobacco plants, which are used as an experimental model for food crops, it seemed to protect the plants from a chemical called ethyl methanesulfonate, which can damage DNA. Plants that had the extra gene grew faster than those that did not. Also, ultraviolet radiation did less damage to the DNA of plants with Dup.

They could help humans cells become more resilient to chemotherapy

Because tardigrades’ molecules have changed in unique ways, microscopic tardigrades can survive in extreme temperatures, dry conditions, and high levels of radiation.

The proteins in them are showing early signs that they could protect humans. When human cells were changed to make these proteins, they became resistant to camptothecin, a chemotherapy drug that kills cells. This was reported in the March 18 issue of ACS Synthetic Biology.

It would seem that humans can learn a lot from this microscopic creature which may be instrumental in our survival if we ever become an interplanetary species. If aliens do exist, tardigrades sent on remote space missions may be the first species that they find from Earth.