The X-59: How This Quiet Supersonic Jet Will Change Military and Commercial Flights Forever 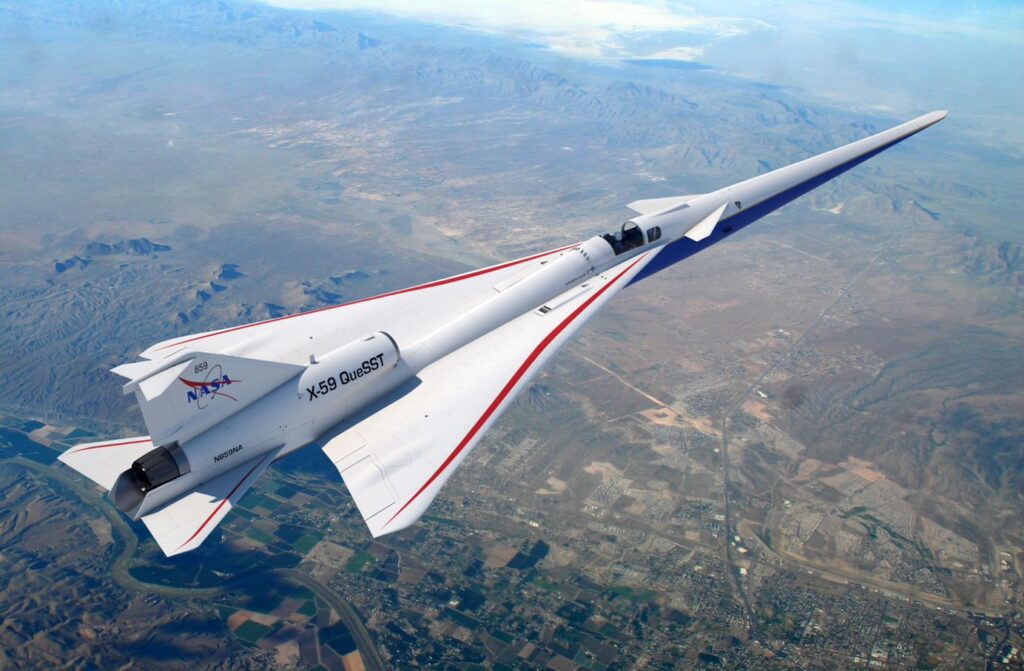 Commercial and military flights that break the sound barrier aren’t allowed over populated locations because of the supersonic shock waves (sonic booms) that scare people.

However, if aircraft could reduce this problem, supersonic flights could become the preferred way of traveling.

For this reason, NASA is experimenting with a new aircraft called the X-59, which is challenging contemporary engineering with a clever system that breaks the sound barrier with lower noise levels.

So, can sonic barrier-breaking planes fly in densely populated locations? Could silent hypersonic flights be the future after the retirement of Concord?

The most emblematic hypersonic aircraft of all times hasn’t operated since 2003. Concorde was more expensive and it delivered 105 decibels at ground level when flying overhead.

But this visionary aircraft from NASA is seeking 75 decibels, which is remarkably quieter than the Concorde, and it could be more cost-effective. So, with the X-59, NASA is studying state-of-the-art technologies that can lower the influence of sonic booms in aircraft.

NASA’s X-59 is under development at Lockheed Martin’s plants. It is conceived to fly at supersonic speeds- at Mach 1.4, (925 mph or 1488 km/h) with no sonic boom that affects people on the ground.

The program is planned to research technologies that can minimize the sound and impact of sonic booms on aircraft flying faster than the speed of sound and transcend the restrictions on supersonic aircraft.

Therefore, if the X-59 supersonic aircraft program succeeds, it may change the entire industry and set a new benchmark for commercial supersonic flight.

The X-59 is designed using the latest aerodynamic research from NASA. Its long nose decreases the shock waves and creates a much quieter sonic boom.

Likewise, the aircraft’s most remarkable part is the wings. They measure 9 meters (29.5-foot) wide, and they accommodate the aircraft’s fuel systems and a considerable share of its control systems.

It also includes a state-of-the-art viewing system because the shape and the length of the nose of the X-59 don’t show a satisfactory view from the cockpit. That’s why the Concorde’s nose was lessened during landings so that the pilots had a more reasonable view. But such a system adds weight and multiple mechanical failure points, so the X-59’s view-screen solution is superior.

A costly project ready to be tested

The predicted cost of X-59 will be around $247.5 million, which isn’t that pricey compared to a trendy jetliner, evaluating the potential time savings.

NASA will begin its initial test in early 2023 to demonstrate the aircraft’s basic airworthiness through scientific testing and a review of the community’s response to the sound.

Community flyovers and a potential new commercial market for supersonic flight are just around the corner… If everything proceeds as NASA expects, the next few years could start a second supersonic air travel era and we can all enjoy its benefits.

A new era of travel

The speed of sound has traditionally been a major headache for aircraft manufacturers. This won’t change unless the sonic boom is greatly reduced to allowable levels.

For this reason, the X-59 will change commercial air travel forever. It could make supersonic flights promising again, but this time over any landscape and for most of the global flights, not just across the Atlantic.