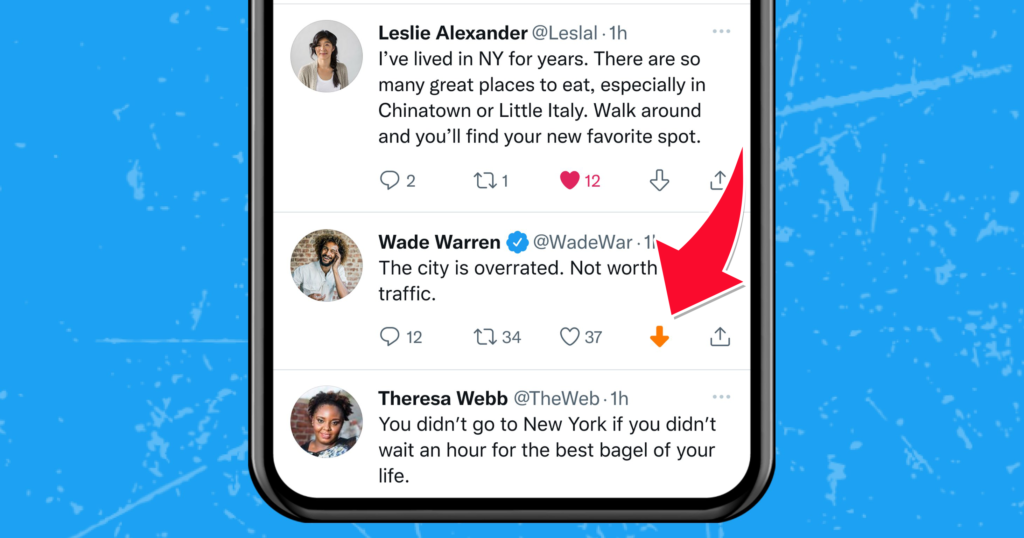 Twitter began testing the functionality in 2021, the service was only available to a limited number of users. Downvoting on Twitter differs from downvoting on Reddit in that the totals for downvotes are not visible to users. Twitter uses downvotes to choose which answers are displayed to its users. According to the results of Twitter’s initial experiments, users tend to downvote answers that they think are insulting or irrelevant. According to the company, this trial also found that downvoting is the most often utilized method for consumers to identify items they do not want to see on Twitter.

Downvotes are personal reactions to replies that are not visible to the public. They will not affect the order in which replies are shown inside a tweet. Instead, downvotes allow users to provide input on the tweets they would want to see more of.

When it comes to stopping the spread of misinformation, downvotes on Twitter may be an effective tool. Other users will not be able to view the number of downvotes made.

Users can remove their downvotes. When you downvote someone’s response and then discover that your reaction was not justified, you may reverse your decision, according to Twitter.

According to the company, downvotes help them “understand the sorts of comments you find meaningful in a discussion, so we can work on methods to offer you more of these types of replies.”

It was discovered that the vast majority of Twitter users downvoted comments that they considered offensive or irrelevant. Downvoting was shown to be the most common method for users to flag information that they did not want to be exposed to. Downvoting can influence what tweets are displayed in which order; the more downvotes a tweet will receive, the lower on the Twitter thread it will appear.

Keep in mind that Twitter can mute a chat or designate it as spam, but such toggles are hidden behind dropdown menus and are not as easily accessible.

In July, the social media business said it was expanding a restricted trial to include a worldwide selection of individuals who use its app after receiving what it described as encouraging feedback from a smaller test conducted in July.

A similar function has been available on Reddit since its inception in 2005, and Facebook has experimented with downvotes but has not implemented them to date.

Twitter did not disclose how many individuals could participate in the test, but it did indicate that it was open to a “global audience.”

We learned a lot about the types of replies you don't find relevant and we're expanding this test –– more of you on web and soon iOS and Android will have the option to use reply downvoting.

A downvote button, according to outside experts, might increase the quality of conversation on Twitter, but they have also raised worry that it could be used to silence minority groups on the social media platform. Internal Facebook researchers subsequently discovered that the emoji-based replies introduced in 2016 accidentally increased toxicity on the network.

According to Twitter, user feedback has been overwhelmingly positive so far.

It was discovered that most people who clicked on the down arrow did so because the response was either insulting, irrelevant, or both.

Twitter believes that downvoting “improves the quality of conversations on Twitter,” which means that the downvote feature may become official in the future.

Remember that YouTube just disabled dislikes by making video vote-counts private, which occurred in November of last year, as well.

However, while some users are critical of the downvote tool on Reddit’s site, the majority of people would appreciate a comparable feature on Twitter.

Intial test was a success

According to reports on Twitter, the experiment has been a success thus far. The Twitter Safety team stated that “those who have tested downvoting agree that it improves the quality of conversations on Twitter.” “We’re looking forward to hearing what other people think of it when it becomes more widely available.” According to social media critics, likes, dislikes, downvotes, and response emojis are frequently highlighted as characteristics on social media that may either improve conversations or make them more toxic.