US Aircraft carriers are tough to sink... But lesser military powers like Iran could cause severe damage with a barrage of missile attacks. 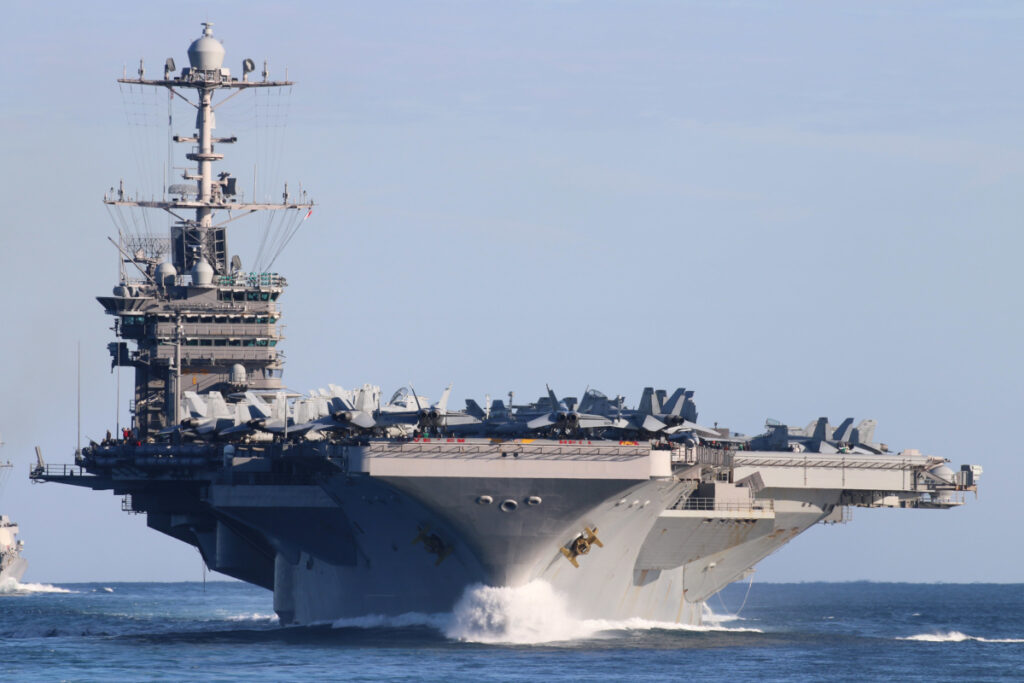 US aircraft carriers are one of the most impressive displays of American power on the seas. These massive ships are floating cities, capable of deploying fighter jets and other aircraft to project US military might worldwide.

But, how do these ships protect themselves against attack? Can a lesser military power such as Iran sink an advanced aircraft carrier?

Tensions between the US and Iran have a long history

The United States and Iran have a long history of tensions. In 1979, Iran’s new Islamic government took American hostages and held them for 444 days.

In 1988, an American warship accidentally shot down an Iranian civilian airliner, killing 290 people.

Recently, the two countries have been at odds over Iran’s nuclear program since the United States believes that Iran is developing nuclear weapons. At the same time, Iran insists that its program is for peaceful purposes.

The tensions between the two countries came to a head in January 2020 when the United States killed Iranian General Qassem Soleimani in an airstrike. Iran responded by firing missiles at military bases housing American troops in Iraq.

A Predator MQ-9 Reaper drone strikes a truck with a Hellfire missile. This is how Qassem Soleimani was dealt with. pic.twitter.com/0GseOFdf5e

These incidents show how quickly the situation can escalate, and how easily it could lead to a full-blown war.

In 2015, the Islamic Revolutionary Guard Corps conducted a rocket test near the USS Harry S. Truman Nimitz-class carrier, while it was crossing the Strait of Hormuz.

The test came as a surprise to many, as it was the first time Iran had carried out such an action in the strait.

While the test didn’t cause any damage to the USS Truman, it did send a clear message that Iran is capable of striking US vessels in the narrow waterway.

Later, they sunk a dummy aircraft carrier sending a message to the US.

Needless to say, sinking a dummy aircraft carrier for propaganda purposes is much easier than sinking actual US aircraft carriers. But, it is still a message for the US Navy to evaluate this possibility.

US Aircraft carriers are heavily protected

The first line of defense for US aircraft carriers is its air wing. Carrier-based fighter jets are some of the most advanced and lethal warplanes in the world, and they are tasked with defending the carrier from incoming enemy aircraft or missiles.

The second line of defense is the carrier’s Aegis combat system, which is a network of radar and computer systems that can track and intercept incoming threats.

This multi-layered approach to missile defense ensures that the carrier can defend itself against a wide variety of threats.

Fourth, the carrier is escorted by a group of ships known as a carrier strike group. This includes cruisers, destroyers, and frigates that provide additional protection against enemy submarines and surface vessels.

Iran has ballistic missiles that technically might sink an aircraft carrier. It’s a very remote possibility, but it might happen.

For example, a massive attack with missiles could saturate the defensive systems of an aircraft carrier, reach its target, and cause significant damage.

It would be necessary to launch probably hundreds of missiles and have an outstanding precision… and luck. However, it is still possible to successfully attack an aircraft carrier.

A Hormoz ballistic missile striking a radar model during an Iranian military exercise. In the second video, a missile strike on a model aircraft carrier during an exercise in the Persian Gulf …

Meanwhile, Iran is still preparing to develop long-range missiles with a higher explosive payload and has already made tests to try to sink US aircraft carriers in the future.

US aircraft carriers are designed to withstand significant damage and continue operating. So, while Iranian missiles might be able to disable a carrier, it is doubtful they could actually sink one.

But, it’s feasible to think that an overwhelming attack with hundreds of missiles could saturate all defensive systems, hit their targets, and endanger one of the top US aircraft carriers.