The newest American amphibious assault ships are more capable than most capital ships of other nations. 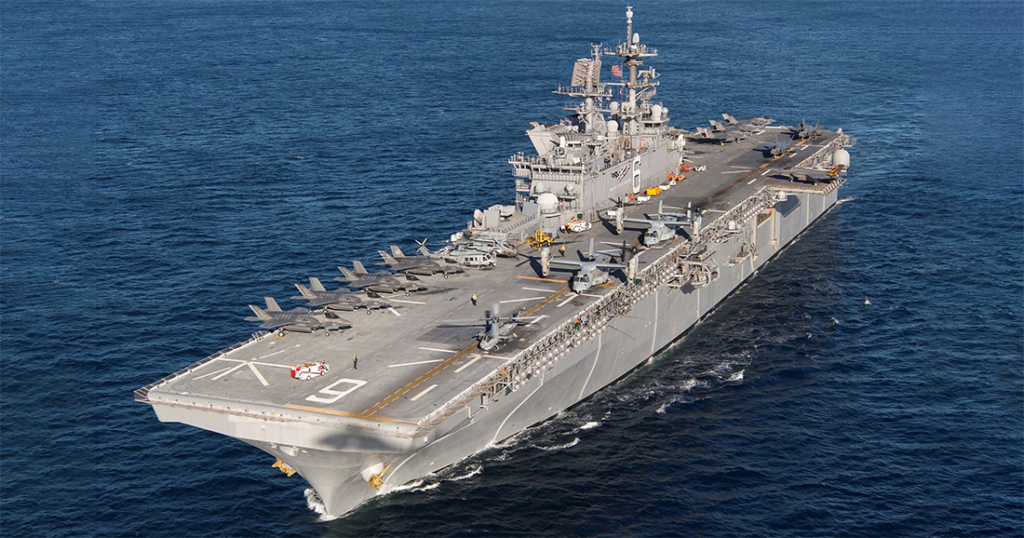 Not only aircraft carriers can carry a large number of aircraft today. Amphibious ships such as the USS America and the USS Tripoli can also do this – significantly increasing the range of action of US Navy’s ships around the world.

In fact, their effectiveness and range of action are much greater than many traditional aircraft carriers of most of the world’s armed forces.

For this reason, some people are already calling them light aircraft carriers.

By investing a total of $6 billion in the USS America and USS Tripoli, the Navy and Marines are putting money on the premise that the future wars will be more about air superiority than amphibious assaults.

Both have been redesigned to look more like aircraft carriers than traditional amphibious ships. This shift toward air capabilities was deliberate and reflects future concerns about the usefulness of Normandy landing-style beach assaults nowadays and bets more on-air supremacy today.

That’s why the USS America and USS Tripoli are actually amphibious assault ships, but they can also operate as light aircraft carriers, fully able to hold short-duration air operations.

Other assault ships can support dozens of helicopters and a few Harrier jets. But they lack any facilities for extended flight operations, making them more like assault ships than conventional aircraft carriers.

Meanwhile, the USS American and USS Tripoli carry up to 30 aircraft, including 20 F-35B, and deliver Marines into battle.

THe USS America is on of the main Marine expeditionary units with the capability of carrying some of the most modern US aircraft such as the Osprey, King Stallion or the F-35B. It was redesigned with an extended hangar deck to allow more aircraft and maintenance space.

Basically, the changes in this amphibious ship were made to carry the new F-35B and increase the power of the USS America. It was commissioned in 2014, and its production cost about $3.4 billion.

Likewise, the USS Tripoli has a very similar design to the USS America, and it was made to carry the F-35B, but it was commissioned in 2020.

On major USS America and the USS Tripoli shortcoming, it’s the relatively low numbers of aircraft onboard. These ships don’t feature catapults due to limited space like the nuclear-powered aircraft carriers, so aircraft take off and land vertically, consuming much more fuel than a conventional catapult take-off and arresting hook landings.

2006 #OnThisDay First flight of the F-35. Watch some F-35Bs take-off and land on the USS America. pic.twitter.com/W7LZtb8aRI

The difference between these ships is barely noticeable as the USS America is only slightly larger than the USS Tripoli, with only a few feet difference in length.

Otherwise, they have the same specifications. They can carry the exact type of aircraft and has the same capacity to transport Marines and take them to the battlefield.

USS Tripoli has the capacity to carry 30 modern and large aircraft/helicopters such as a King Stallion, the largest and most expensive helicopter in the world, or the F-35b Lightning II, the latest fighter jet of the US.

In other words, this amphibious assault ship has greater capabilities than most aircraft carriers in the world.

The USS America and USS Tripoli are great alternatives to aircraft carriers. Aircraft carriers involve a large troop deployment and protection fleet that can be a deterrent force in most situations.

On the other hand, amphibious ships are sufficient for small and medium-sized operations, saving costs and deploying a sufficiently powerful force that can respond in an instant to any threat.