Why is Movie Popcorn so Expensive?

Wonder why  movie popcorn is pricey? This write-up reveal the reasons why 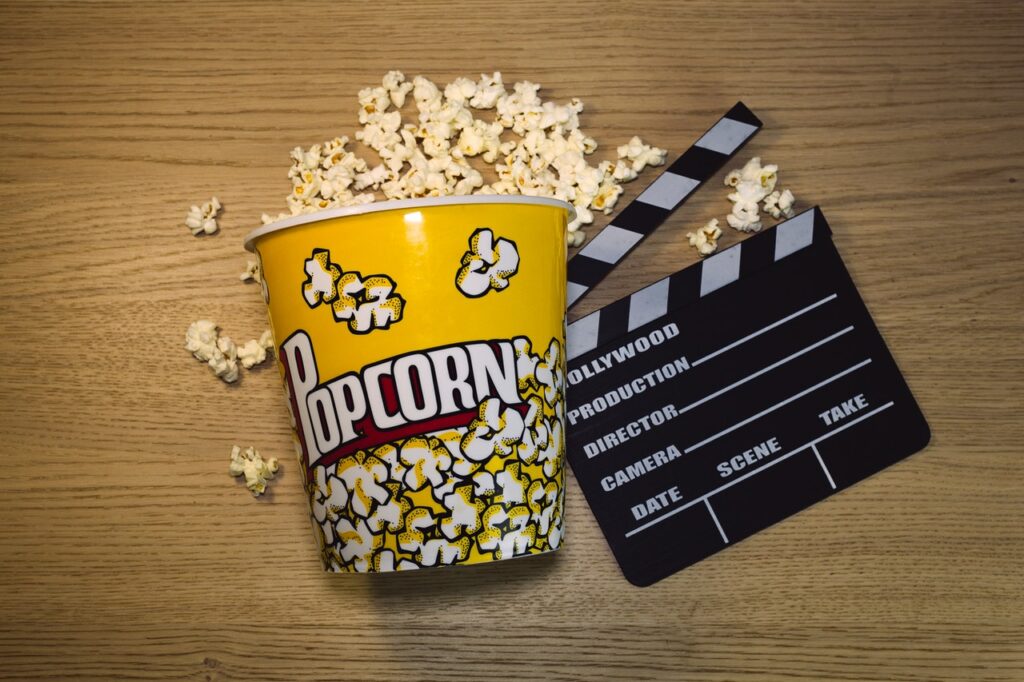 Reasons Why Popcorn is pricey at the movies?

Wonder why movie popcorn is pricey? The movie business might seem like a glamorous industry with celebrities strutting down red carpets to watch premieres, but the economics of the biz is a complicated affair with many financial factors at play. Movies are media for the masses, and the price of a movie ticket remains affordable in most places around the world.

The price of popcorn, sodas, and candy, on the other hand, is on the rise at movie theaters. Are moviegoers being ripped off? Or is there more behind these premium rates for low-cost items? And how did  popcorn find its way into the movie theater in the first place? That’s what we’ll explore today, in this episode of The Infographics Show, Why is movie popcorn so expensive?

Movie Making Industry at  a Glance

Moviemaking is always somewhat of a gamble. The public can be fickle, and the industry is changing with new distribution methods evolving, such as Netflix and Amazon. Even a film with big names and a huge marketing machine behind it can totally flop. The Motion Picture Association of America states that 2016 box office earnings for US and Canada stood at $11.4 billion, which was a rise of 2% from the previous year. In 2016, the global box office was said to earn $38.6 billion.

In the early days of cinema, a movie would be made, hit the theaters, make the vast majority of revenue through ticket sales, and then promptly disappear. Indie surprise hit Little Miss Sunshine was made for $8 million, sold to distributor Fox Searchlight for $10.5 million, and made $59.9 million at the box office. On the other hand, Walt Disney’s John Carter had an estimated budget of $250 million but made only $73 million at the US box office. Nobody in Hollywood really knows which film will be the next hit, but certain franchises such as James Bond usually do well at the box office, and superheroes remain super sellers.

For a cinema to show a popular film, the chain has to bid for the right to show it. This model works to guarantee a high percentage for the film producers and distribution companies. Sometimes as much as 80% of ticket revenue goes to the film company. For a first-run release and over a normal year, most theaters lose a little or make a little money on the ticket sales.

A cinema that takes in $30 million in ticket sales might get to keep about $30,000, or a profit of about 0.1%. When one adds up the cost of running and staffing the premises, utilities, etc., the theater will usually be running at a loss and need  popcorn to pop them from the red to the black.

Price of Ticket and  Movie Popcorn

Back in the day, a movie ticket would be a few dollars, and the matinee was cheaper than that. Nowadays, taking a family of four to the cinema may cost $50, and once you add movie popcorn and sodas, the evening can add up to $100. According to a DoughRoller article, around 55% of each ticket sold goes to the studio that created the movie.

So if a ticket is $10, the production studio gets $5.50. The article divided up that $5.50 into $2.11 for advertising and marketing. $1.71 is set aside for the production of the movie – crew equipment, writers, locations – everything apart from the actors and talent. $1 goes towards movie distribution, and $0.68 goes towards the cast of the movie. This percentage will vary from film to film.

A horror movie may have a low budget for its cast, whereas an action movie will no doubt have a star-studded lineup that will require a larger percentage. The theater chain sets the price for the ticket rather than the production studios.

Theater attendance has been falling according to some studies, and this makes it more difficult for distributors and producers to make a profit from the films that they make and distribute. During the opening week of a film, the price of the ticket is divided between the theater owners, the distributor, and the production company. The longer the picture shows, the higher the percentage of the ticket price goes to the theater. Each film will have a separate contract.

The films that flop normally give the cinema a larger percentage of the ticket price. Foreign sales are a big pull for producers. This is why we see lots of superhero films. They are easy to understand if you are sitting in a theater in China, India, or the USA. An independent romantic comedy doesn’t have the same international value. So while filmmakers try to make hits each time, only a handful of movies are actually successful at the box office each year.

Why Popcorn is Essential  For the  Survival of Movie Theaters

The theater will not force any moviegoers to buy concessions such as popcorn, although in doing so, you keep the business model running. Movie tickets are less expensive than sporting events, concerts, theme parks, and even some art galleries and museums. Movie theaters may eject folks who bring in their own food or drinks, but there is a reason for that.

The theaters are held accountable by law should anyone become ill at their business premises. And, really, if you do want to snack, the concession counter is right there and part of the moviegoing experience. And when you’re buying movie popcorn, you’re helping to keep the cinemas running at a profit. Studies from the University of California and Stanford Graduate School of Business show that this is the real reason behind these inflated movie theater popcorn prices.

Basically, by charging high-end prices for movie popcorn, the movie theaters are able to keep the price for movie tickets lower, allowing more moviegoers to watch the latest epic action or superhero film.

The research questions whether it is better to charge more for the primary product (the movie ticket) or the secondary product (the popcorn), and most moviegoers would agree that the price of the ticket is the most important. Lower ticket prices mean that people who want to enjoy the movie but aren’t too fussy about munching on movies theater popcorn while doing so, have the door wide open for them to watch the latest flick.

Sales from concessions such as movie popcorn make up around 20 percent of a movie theater’s gross revenues, but they make up almost 40 percent of profits. Some studies report that this figure is more like 85% of profits. While ticket revenues must be shared with movie distribution companies, the theater gets to keep 100 percent of the popcorn sales, so this is typically their bread-and-butter business.

A study on Movie-Theater Popcorn Sales

Academic Wesley Hartman of Stanford and Richard Gil, assistant professor at the University of California, discovered that during periods of high and low cinema attendance, the movie popcorn sales remained stable and were actually proportionately higher during periods of low ticket sales. This suggests that dedicated moviegoers will buy popcorn, whereas the occasional moviegoer will happily skip the concessions and just watch the movie.

In a separate study of Spanish theaters, it was found that customers who bought their movie ticket online tended to buy more concession items compared to those who bought their ticket at the door. People who come to watch movies in groups tend to buy more movie theater popcorn. Families are more likely to buy movie popcorn. Children are persuasive consumers. This explains why there is normally at least one animation or child-based feature shown at movie theaters at any one time.

A Brief History of Popcorn Sales At the Movies

But how did popcorn first find its way into the movie theater? Corn was first grown domestically about 10,000 years ago in what is now Mexico. Archaeologists have discovered remnants of popcorn that appear to be dated as early as 3600 BC. The popping of kernels using a hand stovetop occurred for the first time in the 19th century and first appeared in the 1848 Dictionary of Americanisms. The 1890 invention of the popcorn maker increased the popularity of popcorn, with street carts fitted out with popcorn makers.

During the Great Depression, movie popcorn cost 5-10 cents a bag, and while other businesses went under, the popcorn business survived and even thrived. Theater owners discovered that the snack was popular at their shows but were initially displeased as they thought munching on popcorn mentally distracted the audience from watching silent films. Andrew Smith, the author of the book Popped Culture: A Social History of Popcorn in America, said the following to Smithsonian Magazine:

“Movie theaters wanted nothing to do with popcorn because they were trying to duplicate what was done in real theaters. They had beautiful carpets and didn’t want the popcorn being ground into it. Movie theaters were trying to appeal to a highbrow clientele, and didn’t want to deal with the distracting trash of concessions – or the distracting noise that snacking during a film would create.

When film added sound in 1927, the movie theater industry opened itself up to a much wider clientele, since literacy was no longer required to attend films (the titles used in early silent films restricted the audience) and by 1930, attendance to movie theaters had reached 90 million per week. Such a huge patronage created larger possibilities for profits – especially since the sound pictures now muffled snacks – but movie theater owners were still hesitant to bring snacks inside of their theaters.”

They eventually changed their tune over time. In 1938, Glen W. Dickson installed a movie popcorn machine in the lobby of his Midwestern theaters. The idea became a successful addition, and the trend soon spread to other theaters around the country. The rest, as they say, is history, and now popcorn sales make up to 85% of theaters’ profits and keep the industry afloat.

So, are you a movie theater popcorn buyer, or do you head straight for the screen empty-handed? Or are you a popcorn smuggler, bringing in your own supply? Let us know in the comments! Also, be sure to watch our other video called Why do games cost $60?  Thanks for watching, and as always, don’t forget to like, share and subscribe. See you next time!