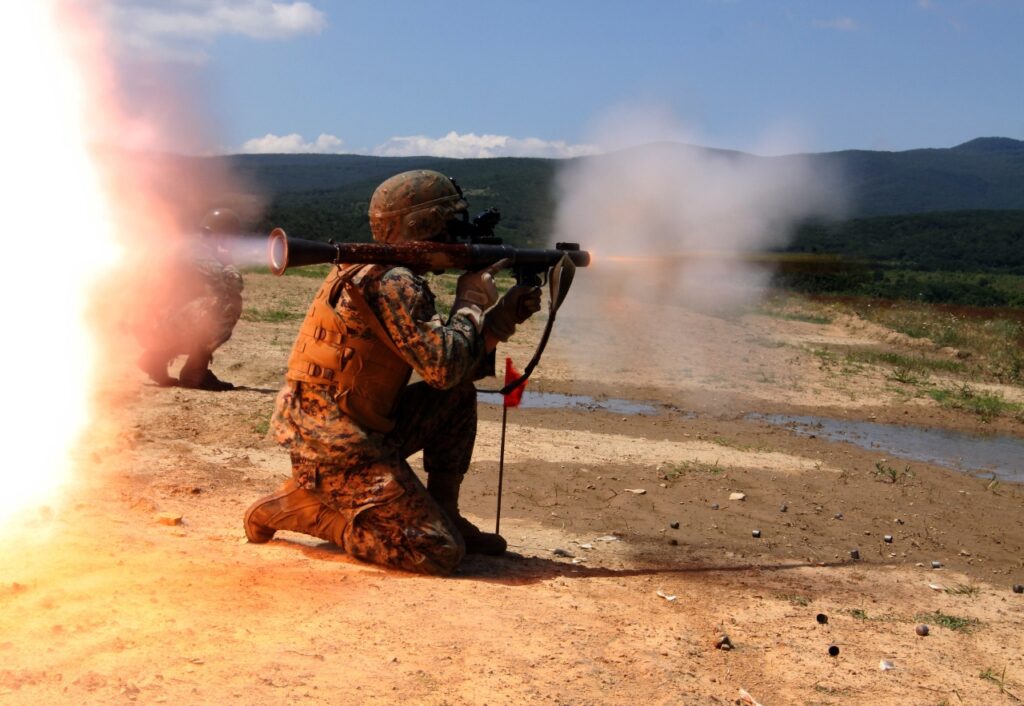 The RPG-7 launcher is and has been, one of the most common and effective infantry weapons in past and contemporary conflicts.

This rocket launcher has become a legendary weapon, and you have probably already seen it in the news, movies, and video games. It’s one of the favorite weapons of rebel armies around the world and they have been widely used in many wars such as Vietnam War, Soviet-Afghan War, the Syrian Civil War, among many others.

And it continues to be used today because the RPG and its variants are still effective, cheap, and easy to use. Think of it this way, a multi-million dollar tank or armored vehicle can be destroyed with a $500 shell. That’s really impressive for a cheap weapon!

The birth of a legend

The basic design of this legendar y weapon was developed by the Soviets shortly after World War II (WWII). During WWII, the Soviets were impressed by the performance and destructive power of weapons such as the German Panzerfaust and the American Bazooka.

As a result, they created a similar weapon to attack tanks. It was the RPG 2, which later evolved to RPG 7. Now, almost 9 million RPG-7 launchers and their variants have proliferated all over the world.

Why do so many rebel groups and armies love the RPG?

The RPG-7 is the acronym for rocket-propelled grenade. It can fire 4 to 6 rounds per minute and it is extremely cost-effective and easy to use. That’s the reason why it is still in use in almost every war, even after over 60 years in service. They can destroy tanks, helicopters, and artillery pieces with just one shot.

Its projectile is built to stop armored vehicles but in some cases, it has been used against infantry – and even animals as target practice. During the Vietnam war, there were many reports of Vietcong soldiers shooting buffaloes to practice their RPG shooting, and in most cases, these buffaloes ended up in pieces.

In 2013, in Afghanistan, a US soldier was hit directly by an RPG-7 rocket. The projectile impacted and lodged in the soldier’s hip without detonating. He was taken to a surgical base where doctors and technicians worked to save his life and remove the projectile. In the end, the warhead was extracted. However, in many cases, it can be very effective in neutralizing troops. He was very lucky!

What would be the result of using an RPG to destroy an armored vehicle? The main purpose of the RPG is to destroy tanks. But modern tanks with high armor thickness is virtually invulnerable from the front to an RPG-7. But, it could be penetrated from the side and rear, and when we are talking about tanks with older armor, the chances of destroying them are quite high.

Therefore, RPGs are more effective in urban battlefields where they can be placed behind or above a tank and shot at close range. The US army faced this problem during the war in Iraq where several Abrams tanks were penetrated and destroyed by shots from the sides and rear. But, at the same time, one Abrams took 14-18 hits from an RPG 7 and continued to operate without problems.

It is almost impossible for a helicopter to dodge an RPG projectile at close range. In fact, there is a famous case of an RPG shooting down two Blackhawk helicopters in Mogadishu, Somalia in October 1994. This event inspired one of the most iconic war films of all time Black Hawk Down.

Similarly, during the Vietnam War, both RPG 2 and RPG-7 were responsible for shooting down 128 U.S. helicopters.

The RPG-7 is really a badass weapon!

The RPG-7 is here to stay for many years to come. Its price compared to the damage it can do to million-dollar vehicles is by far a great bet.